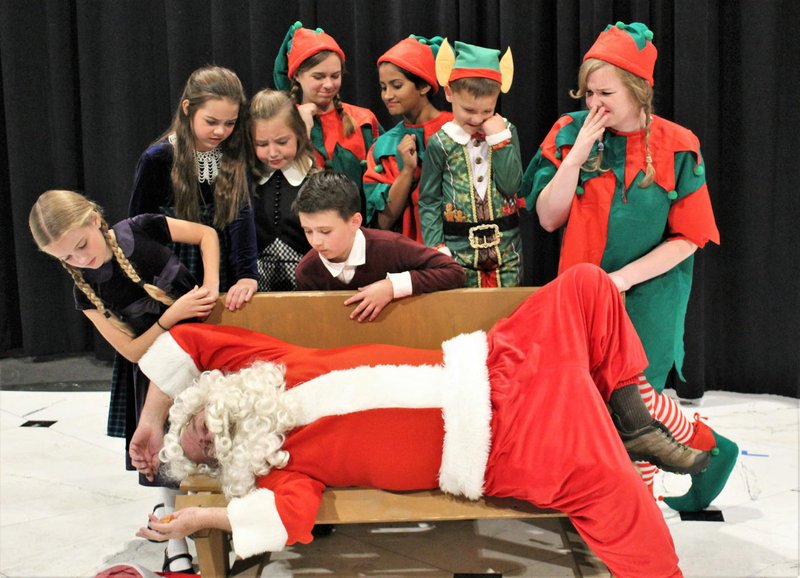 Courtesy Photo "Being given a chance to play Kris Kringle is a wonderful occasion to work with all the young people in this production," says actor Jon Gustafson, who portrays the Jolly Old Elf in the Fort Smith Little Theatre version of "Miracle on 34th Street."

"Oh, Christmas isn't just a day, it's a frame of mind," says Kris Kringle in "Miracle on 34th Street." When Fort Smith Little Theatre mounts the stage adaptation of the 1947 classic Christmas movie, it will be doing its best to instill that frame of mind in its audiences.

"As this show will be on stage in November, I am hoping that it will help get audiences in the Christmas spirit a little earlier than usual," says director Brandon Bolin. "This has been one of my favorite Christmas movies for years. I love the story, particularly the relationships between each of the four main characters."

"Let's catch its spirit and heartily proclaim that it is the freshest little picture in a long time, and maybe even the best comedy of this year," said a New York Times review of the movie, which won Academy Awards for Best Writing, Original Story and Best Writing and Screenplay, as well as Best Supporting Actor for Edmund Gwenn, who played nursing home resident Kris Kringle. When Kringle takes a job as Santa Claus at New York City's Macy's Department Store, he's so good in the role that he insists he is the real Santa Claus. Trouble ensues, culminating in a commitment hearing where Kringle's sanity -- and identity -- is called into question. But in this feel-good holiday production, not to worry: There is a happy ending.

"Kris' guidance on faith and imagination asks us to approach the edge of our [sanity] to find love and goodness in our hearts," says actor Jon Gustafon, who plays the role of Kringle.

"Hope -- this show is all about it, and, in having faith, it is about hope winning out over experience," says actor Steve Dwiggins, who plays Judge Harper.

"I certainly didn't do myself any favors by choosing a show with 27 actors in it for my first one," says Bolin, who says that this is his "full production directorial debut" at FSLT. In spring 2017, he directed the off-season production of "The Complete Works of William Shakespeare, Abridged." "The small stage at FSLT definitely creates a bit of a challenge with regard to the set -- especially one that would need to accommodate over 20 actors. But it is helping me stretch myself, and my crew members, like my set designer, have been a dream to work with. The crew is made up of such efficient folks that half my job is done. But then again, the cast is a delight to work with. Their patience with me as a first-time director, and their helpfulness, makes it a joy to get to rehearsal every night."

Though the show can be viewed as light holiday fare, there's certainly a deeper meaning to be mined from its simple themes, agree the FSLT production team.

"Personally, I would like for audiences to take home the kindness that is seen sprinkled throughout the storyline of this play: accepting someone for their goodness and opening our hearts to the possibility of love that is right in front of us that we are possibly taking for granted," says producer Suzanne Thomas.

"I sincerely hope that audiences sit back and think for a minute about what each of us can do during the Christmas season to spread peace, goodwill and kindness," says Gustafon. "Some answers may be deep in our imagination -- let's let them emerge!"

Print Headline: 'Tis The Season To Be Jolly