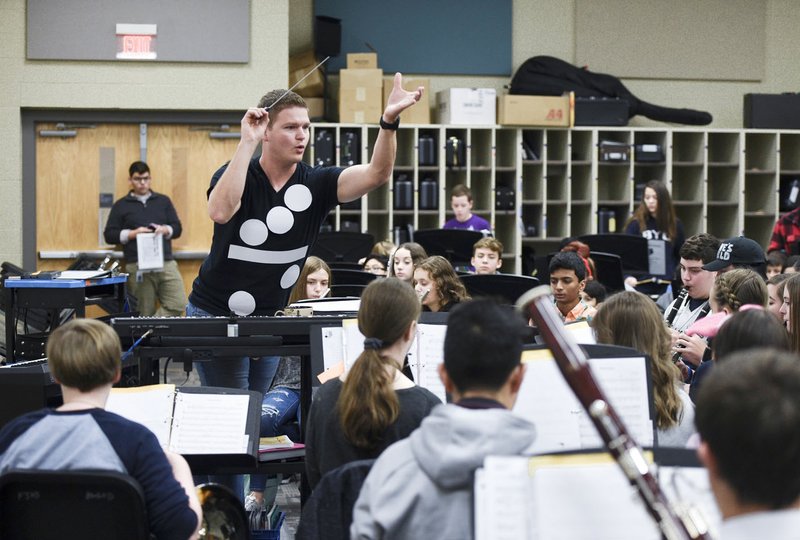 NWA Democrat-Gazette/CHARLIE KAIJO Dylan Gilliland, the eighth-grade band teacher, leads Thursday at his band class at Fulbright Junior High School in Bentonville. His band has 95 members. Official Oct. 1 enrollment figures are out for Arkansas school district for this school year. Bentonville led the way in terms of growth with a 3.6% increase. Rogers, Fayetteville and Springdale saw more modest increases. Fulbright's enrollment is larger than ever with more than 1,000 students.

Public school enrollment across Northwest Arkansas grew 1.7% over the past year as schools added about 1,500 students, according to state figures.

That's roughly in line with the trend of the past several years. Growth in the public schools of Benton and Washington counties has averaged 1.9% per year since 2014.

Number of students enrolled in public schools in Benton and Washington counties has grown steadily since 2014.

There were 88,867 students enrolled in the two counties as of Oct. 1, the date on which the official enrollment count is recorded each academic year for Arkansas school districts and public charter schools.

Enrollment affects how much money the state allots for districts. State funding is based on the average kindergarten through 12th-grade enrollment in the first three quarters of the preceding school year.

Few schools are feeling the effect of growth more than Bentonville's Fulbright Junior High, which has 1,033 students -- up 9.9% from a year ago. Fulbright's enrollment has grown steadily since it opened six years ago with 726 students and is now over its capacity of 1,000.

"To say we're ready for some elbow room would be an understatement," said Fulbright Principal Bradley Webber.

The school has made adjustments. For example, a tutoring program that meets before, during and after school used to have its own classroom and now meets in converted hall space.

The number of teachers who don't have a classroom to call their own, and instead travel from one room to another, is up from 12 last year to 18 this year. Some classes meet in the same room at the same time, Webber said.

Lunch periods are 30 minutes. It was taking kids as long as 18 minutes to get through the lunch line in August. The staff has managed to get that down to five to seven minutes.

"We're doing better. We want to make sure that not only do we get every kid through that line, but we want to give them time to eat and socialize. We know that's an important part of junior high," Webber said.

Fulbright didn't move any students to other schools. The School District's fourth junior high opens in Centerton next fall and will absorb some of Fulbright's attendance zone.

The Bentonville School District, after growing a relatively modest 2% each of the past two years, surged again this year, adding 623 students for a growth rate of 3.6%. Bentonville has 17,848 students this year, third highest in the state behind Springdale and Little Rock.

Districts up, districts down

Each of the five largest school districts in Benton and Washington counties -- Springdale, Bentonville, Rogers, Fayetteville and Siloam Springs -- added students. Their collective enrollment of 70,591 is up 1,192 students, or 1.7%, from last school year.

Growth among the region's 10 smaller districts was more modest. Their combined enrollment increased 0.2% from 14,693 to 14,730. Enrollment shrank in Decatur, Elkins, Greenland and Lincoln.

Lincoln saw enrollment drop 7.1%, from 1,129 last year to 1,049 this year, the biggest loss among Northwest Arkansas school districts in both number and percentage of students. The district's enrollment exceeded 1,300 about 10 years ago, but it has steadily declined.

Mary Ann Spears, superintendent since 2013, said kindergarten classes the past few years have been smaller. The district graduated 89 seniors last spring, whereas this year's kindergarten class had 74 kids as of Oct. 1.

Spears said Lincoln has managed the enrollment decline without having to lay off any employees, the largest expense for any school district. Lincoln lies outside the Interstate 49 corridor where Northwest Arkansas' growth is highest, she said.

"Even Prairie Grove is seeing some growth. It just hasn't gotten here. We are hopeful it will come our way eventually," Spears said.

Greenland, another small district just south of Fayetteville, lost enrollment for the fourth straight year. Greenland had 753 students on Oct. 1, 96 fewer than 2015.

Enrollment across Northwest Arkansas' four open-enrollment charter schools continues to increase, from 3,268 last year to 3,546 this year, an 8.5% jump.

Leading the way were Northwest Arkansas Classical Academy in Bentonville and Arkansas Arts Academy in Rogers, with increases of 28.8% and 8.5%, respectively.

The Classical Academy, a K-12 school, this year expanded to a building adjacent to the one it has occupied on Melissa Drive since the school opened in 2013. The high school grades moved into the new space, and more class sections were added at the elementary level in the original building.

"It was exciting to get more families into our school who have been wanting to be here and had been on the wait list," said Headmaster Susan Provenza.

The Arts Academy, a K-12 school with two campuses, saw most of its growth on its West Poplar Street campus, which is home to grades seven through 12. That campus underwent a major expansion and renovation project, which was completed last school year. Enrollment at the Poplar campus is up from 464 last year to 546 this year, an 18% increase.

Charter enrollment makes up 4% of public school enrollment in Benton and Washington counties. Six years ago it was 1.9%. Not included in these numbers are students attending one of Arkansas' two virtual schools that are charter schools: Arkansas Virtual Academy and Arkansas Connections Academy, which enroll about 4,000 students combined from throughout the state.