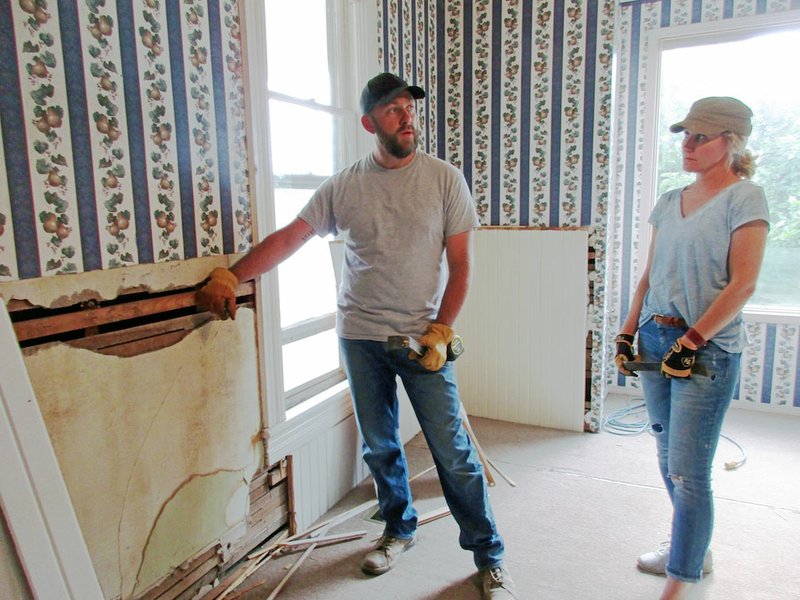 Courtesy Photo/HGTV "Our production team became an extension of our family, as we spent so much time together and got to know one another really well," says Jenny Marrs of getting used to the cameras. "Because of the friendships formed with our team, the cameras weren't nearly as imposing as they were at the beginning of this process. We really did forget about them as time went on."

When HGTV's new show "Fixer to Fabulous" debuted last Tuesday at 8 p.m., Jenny and Dave Marrs -- the husband-and-wife team behind Bentonville's home development company Marrs Developing -- found themselves in an unusual position: They were watching a television show in which they were the stars. "Fixer to Fabulous" started filming in the summer of 2017, and the couple were finally able to see the fruits of their labor on the big screen at Skylight Cinema in Bentonville, where a special premiere party was held.

"The night was so much fun and a bit of a blur," says Jenny Marrs of the evening. "We were surrounded by so many people who are dear to us and have walked with us as we filmed and prepared for the season to launch, so it was wonderful celebrating with them. It also felt kind of like our wedding day because we wanted to spend time with everyone, but it was physically impossible. It was really a fun and celebratory evening, and we were so grateful to everyone who shared it with us."

To find out more about the show, including air times, visit hgtv.com/shows/fixer-to-fabulous.

The show follows the couple as they renovate -- or build -- homes in the Northwest Arkansas area. The duo's busy lives -- they have five children, all younger than 9, and are partners with Help One Now, a nonprofit organization that helps to provide educational opportunities for orphaned and at-risk teenage boys in Africa -- along with the skill and talent they've amassed since they started their business in 2004 offer a lot of fodder for interesting television viewing.

Things might change in the future, should the show find the same kind of popularity as a sensation like HGTV's "Fixer Upper" -- which made stars of Joanna and Chip Gaines -- but for now, says Jenny, they're just focusing on things day-by-day.

"Honestly, we still are running a business and raising five (very busy) kiddos, so life just has to keep moving forward regardless of the show," she notes. "We still have lunches to pack and soccer practices to attend and sleepless nights with a newborn. We don't plan to change our day-to-day lives much because of the show."