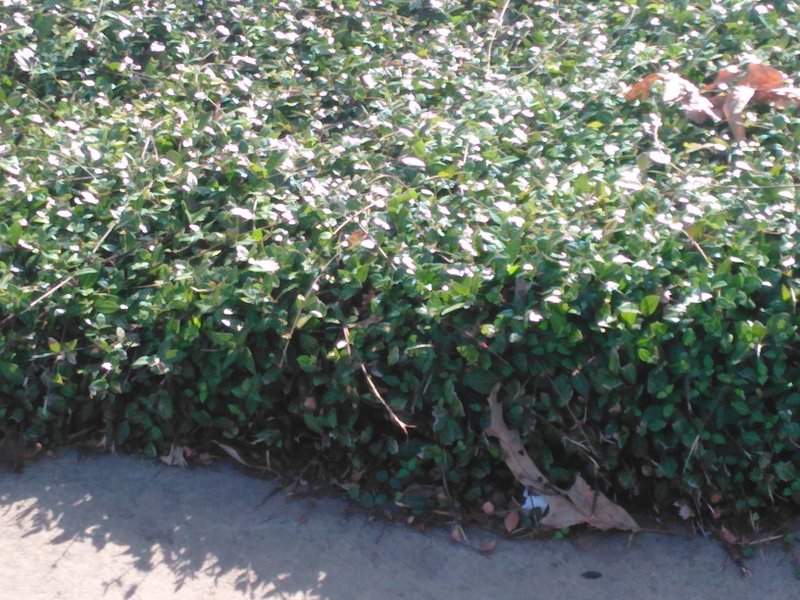 Asiatic jasmine is an evergreen ground cover that can grow in sun or shade, but it can be aggressive. (Special to the Democrat-Gazette via Janet B. Carson)

Q Someone suggested that you could help me identify this ground cover that is in the medians in front of Kroger Marketplace on Chenal Parkway in Little Rock. It's very thick and I don't think it blooms. Can you tell by the picture if this is Asian Jasmine, which someone suggested?

A Yes, the plant in question is Asiatic jasmine — Trachelospermum asiaticum. It is not a true jasmine. It is an evergreen ground cover that will grow in sun or shade. It has the potential to produce a small white bloom, but we rarely see flowers on it in Arkansas. It can become aggressive and spread, so planting it with some type of barrier between where you want it and where you don't is a good idea. 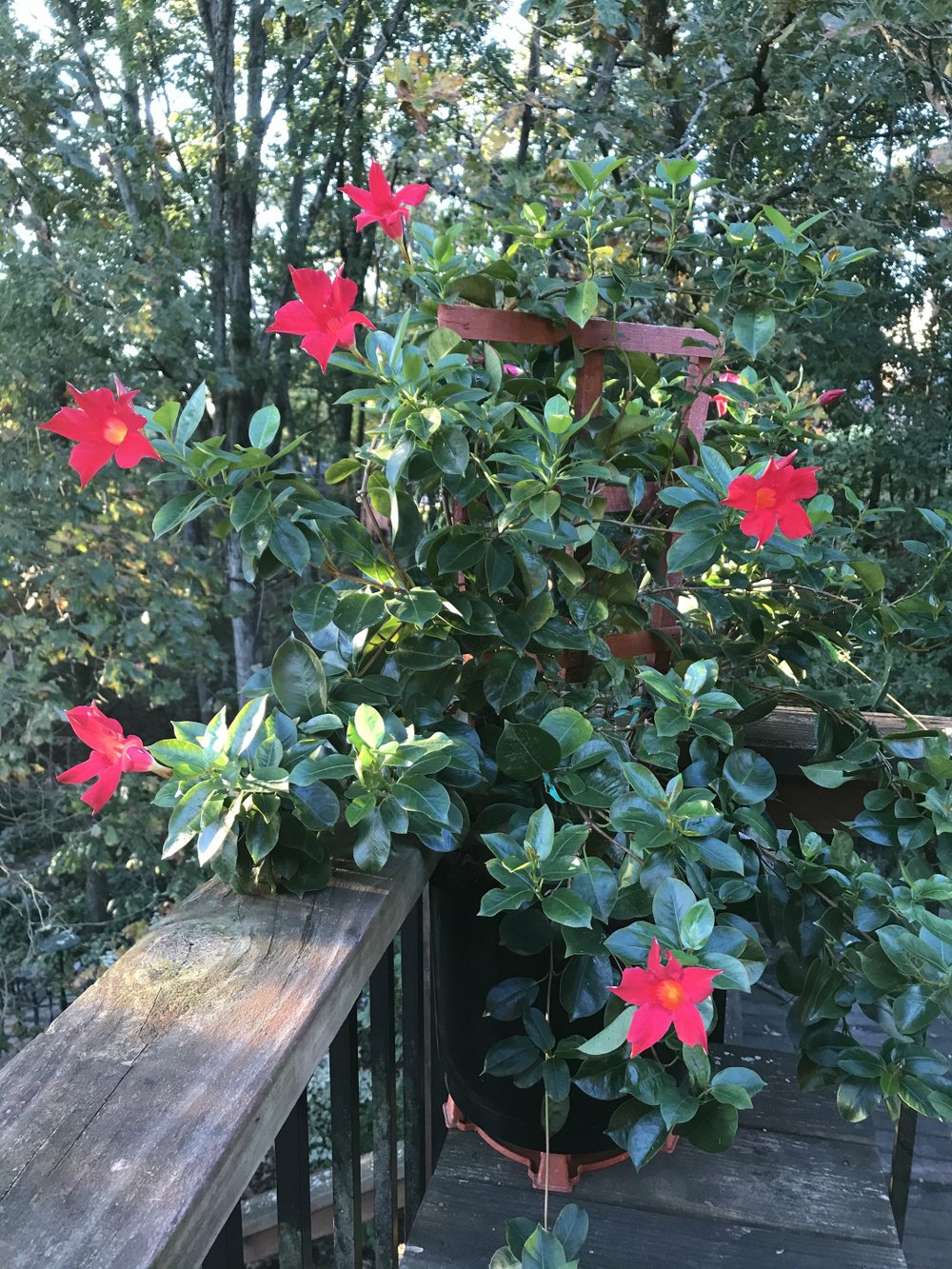 This lovely tropical flowering mandeville will not survive winter outdoors, but with care it can be saved for next year. (Special to the Democrat-Gazette via Janet B. Carson)

Q Can I overwinter our mandevilla? It's still blooming, and I would like to keep it since it has found a happy place on our deck to thrive.

A Mandevilla is a tropical flowering plant that will not survive outdoors in Arkansas. You have a couple of options to overwinter it. One is to take it indoors and treat it as a houseplant. The fact that it is not already indoors means there will be some transitioning, due to the lower temperatures we have been experiencing. Don't be alarmed if it sheds a bunch of leaves while it is acclimating. Move it to the sunniest and coolest room in your house. If you have access to a greenhouse, even better. If you plan to overwinter tropical plants in the house, you want to move them before cool weather hits. Otherwise, the plants think they are hardening off for winter, and then when moved into a heated, low-humidity environment they struggle. The other option is to simply keep it alive for the winter. If you have a garage or a crawl space under your house, you can move it into one of these prior to a freeze. Provided the root system doesn't freeze, the plant should survive. Will it look gorgeous after this? No, you will need to cut it back severely, re-pot it and let it begin new growth again outside next spring. 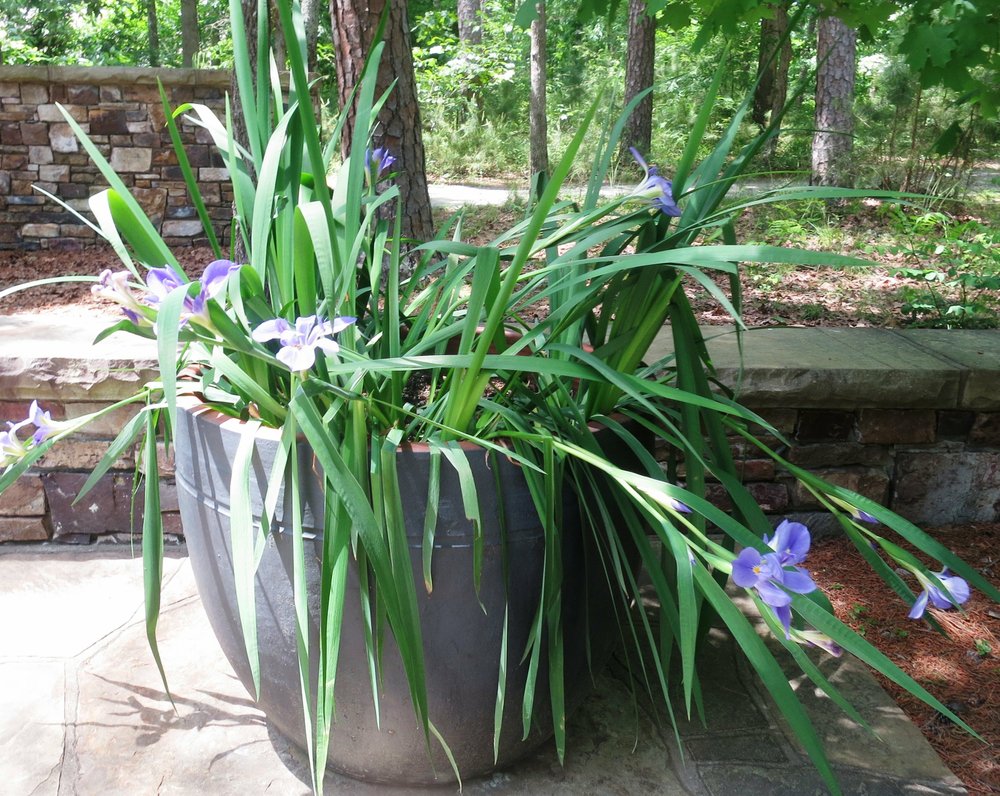 Tough plants that they are, irises should survive being transplanted to the ground. Just watch closely that they don't get heaved out of the soil by freezing winter temperatures. (Special to the Democrat-Gazette via Janet B. Carson)

Q I really need your help with two of my mom's irises. Can I still plant them now? They have been in a pot for 2 ½ years with a well-established root system. I have already dug a 16-inch by 20-inch-wide hole that I tilled and amended, then packed down except for the top 4 inches. I was hoping to just move the plants undisturbed out of the pots that are filled with potting soil. I was just going to plant them at the same level as they are in the pots and then fill in with native soil, still keeping the rhizome uncovered. Do you think they would survive with our wide swings in temperatures? When there is a frost or freeze warning should I cover the soil around the rhizome with paper, clear plastic or heavy mulch? Do you think the roots would begin to move out of the potting soil and into the native soil once they are watered?

A First off, iris plants are usually pretty tough plants, so I think they will do fine. I think they will be much happier in the ground than in a pot. Go ahead and plant, but pay attention this winter. The problem with late planting is that they usually don't have time to establish a root system, and due to shallow planting, the rhizomes can get heaved out of the ground with fluctuating temperatures. I would not cover them, but just watch the plants, and if you see them getting heaved out of the ground, just lightly put them back in. Since you have a strong root system already, I think they will do fine. I do wonder how well they bloom since they should be pot-bound after two years in a container. I would leave them intact as you transplant, and consider dividing next summer, six to eight weeks after bloom. 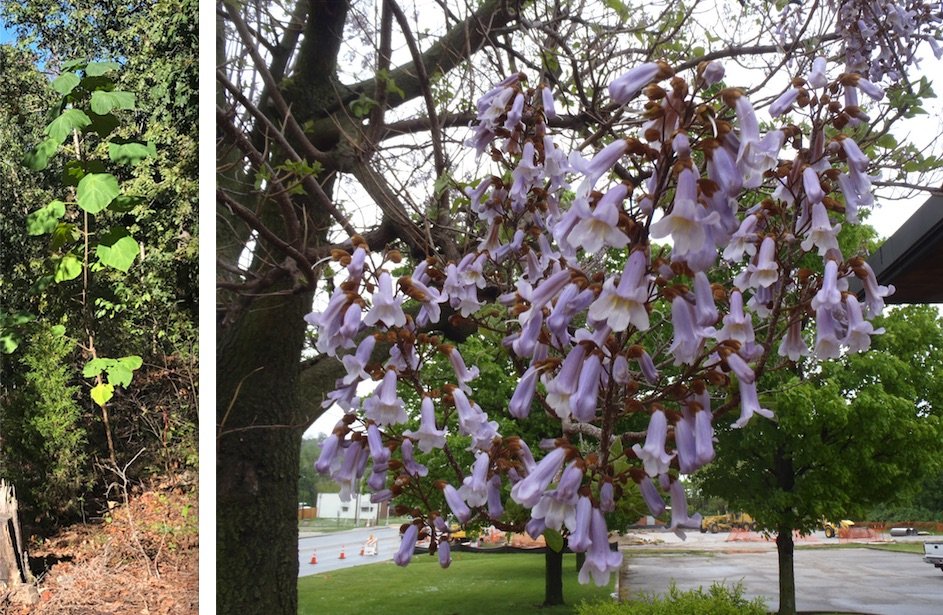 Q Please help identify this tree. It is about 12 feet tall.

A I am betting that this tree is either in its first or second season. You have a seedling of the royal paulownia tree, Paulownia tomentosa. I get a lot of questions on this one. The tree will begin to bloom when it is about 4-6 years old with large, showy purple blooms. After bloom, it produces woody seed capsules which pop open when ripe and scatter seeds. A lot of the seeds germinate wherever they land resulting in giant seedlings. When the trees are young, they can produce enormous leaves, and the trees grow rapidly. Leaf size gets smaller with age. Because of their rapid growth, they are not strong trees and can start to fall apart with age as well.

Retired after 38 years with the University of Arkansas Cooperative Extension Service, Janet Carson ranks among Arkansas' best known horticulture experts. Her blog is at arkansasonline.com/planitjanet. Write to her at P.O. Box 2221, Little Rock, AR 72203 or email.

Print Headline: In the Garden