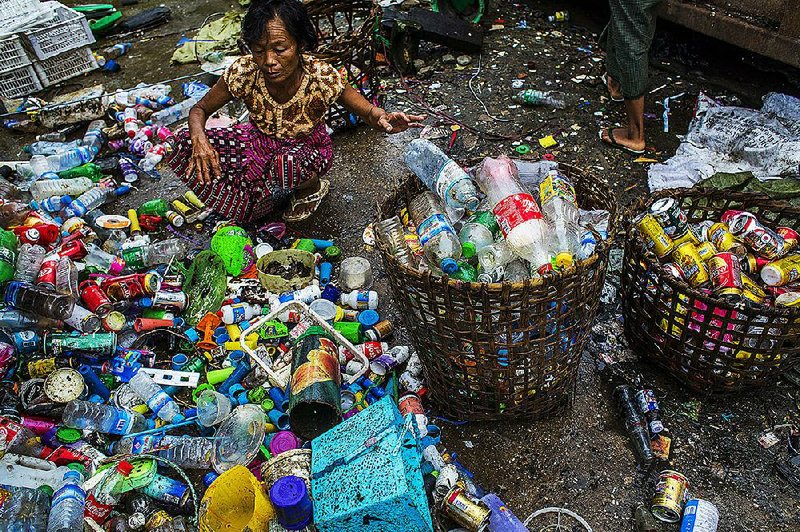 A woman collects plastic bottles from a pile of trash in Yangon, Burma, in September. The declining presence of shared terra-cotta water pots — replaced in some cases by plastic bottles with tin cups chained to them — is just one small change amid great upheaval in Yangon.

TWANTE, Burma -- When the bullock carts lugging passengers and produce pulled into Yangon, coated in the umber dust of the countryside, the people on board, if not the oxen, used to be able to count on refreshment.

On many a street corner, often under a shade tree, stood what looked like a dollhouse on stilts. Inside was a rotund clay pot covered by a triangle of woven leaves. The pot held drinking water.

Cool without refrigeration, sweet with the taste of earth, nothing slaked the insistent thirst of the tropics better, according to some residents of Yangon, Burma's largest city.

"I only drink water from a clay pot," said Ma Aye Aye Thein, as she sat on a plastic stool and occasionally fanned herself. "I feel hot when I drink from plastic."

The gifted water was also a welcome reminder of the hospitality of strangers in a period when trust was in short supply. During the height of the military dictatorship that ruled Burma (also known as Myanmar) for nearly 50 years, people said the walls had eyes and ears. In those times, it didn't take much for Special Branch, the secret police, to turn a neighbor into an informant.

But even as the city disintegrated under the junta, with chunks of mortar falling off once-grand buildings and cracking the skulls of passersby, the water pots were still set out for the thirsty.

It was part of a tradition of meritorious acts embedded in Burma's Buddhist-majority culture, with the neighborhood water pots refilled by retirees, housewives or anyone looking for some karmic credit for a good deed.

"Putting water out is a Buddhist ideal to be kind to others," said U Candana Sara, a Buddhist abbot.

Now, many of these terra-cotta water pots are gone, replaced in some cases by plastic bottles with tin cups chained to them. Some of the little refreshment houses are full of litter or abandoned altogether.

The declining presence of the shared pots over the past few years is just one small change amid great upheaval in Yangon. The military generals, who now share some of their power with a civilian government, have decamped to a new capital, Naypyitaw, a city a few hundred miles to the north, purpose-built to showcase their authority.

Yangon's crumbling architecture is being demolished, with British colonial relics making way for glass-sheathed buildings. A city once trapped in a slower, poorer era because of governmental neglect is being remade.

Clay jugs, heavy yet fragile, are not made for mobile lifestyles in which people expect to take their water with them rather than depend on the uncertain kindness of strangers. You can't screw a top on a terra-cotta pot.

So plastic is now a growing scourge in Yangon. Disposable water bottles float in the Irrawaddy and Yangon rivers. They crunch under the wheels of bullock carts, startling the oxen.

The potters who have fashioned the water vessels for generations have had to adapt to this faster, more disposable world.

U Nyunt Khin, 70, lives in Twante Township, on the outskirts of Yangon, where the surrounding Irrawaddy Delta disgorges a rich clay ideal for pottery. He has been making water pots for 40 years. Business started souring a decade ago, he said.

Back then, he and his wife made 400 pots a day, swirling a rough pattern on each. Today, he is lucky if he can sell 10.

"My business is disappearing, but I will never drink from plastic," he said. "The flavor is bad."

But it's about more than taste.

"In some places, people don't even put out water at all," he said, shaking his head at the parsimony. "We've lost our morals. It's like we're returning to the Stone Age."

Others worry the abandonment of the practice will only intensify distrust in a city where Special Branch is back again, or perhaps never really went away.

Eyes and ears are alert, not only in the city's teahouses but also online. In August, U Min Htin Ko Ko Gyi, a filmmaker, was sentenced to a year of hard labor for social media posts deemed critical of the military.

"The disappearance of clay water pots symbolizes that there is no trust in communities and less kindness," said U Sue Hnget, a prominent Burmese writer.

In Twante, dusk quickly turned to night, as it does in the tropics. Mosquitoes began to bite. Nyunt Khin lit a kerosene lamp, illuminating the pottery dust suspended in the air. Electricity is too expensive, he said. The heat of the day still pulsed.

None of his five children wants to take over his pottery business although, for now, he has convinced two to work the kiln. The three others, all daughters, work in a cement factory.

If he is truthful, Nyunt Khin said, his daughters are the ones who keep the family afloat, especially after Cyclone Nargis, which killed more than 135,000 people in 2008, inundated the village and forced him to rebuild his kiln.

Down a dirt path from Nyunt Khin's thatched warehouse, U Kyaw Soe runs a fourth-generation pottery business. He knows he has to change with the times, so he has shifted from water jugs to flower pots and planters decorated with cartoon animals.

But Kyaw Soe has another backup plan for his family's future, one that has nothing to do with pottery. His older son is learning Japanese, his younger is majoring in geography at college.

The village is littered with abandoned kilns.

Twante remains a place where many men in sarongs and bamboo pith helmets smoke cheroots and women balance baskets of vegetables on their heads. But the younger generation favors shorts and soccer jerseys.

At night, bathed in the glow of a television soap opera, the women of Twante worked, pouring boiled water not into earthen vessels but into scavenged plastic bottles.

The refilled bottles went into a cooler powered by a generator thrumming a bass note. Modernity, bright and loud, drowned the night noises: the hiccup of geckos, the complaint of insects and the rustle of palms heavy with coconuts.

When younger customers come to look at Kyaw Soe's flower pots, he said he has to serve them plastic bottles of refrigerated water.

"They are not used to the taste from clay pots," he said. "They think it tastes like dirt." 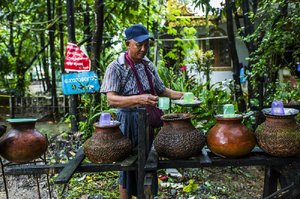 Photo by The New York Times/MINZAYAR OO
In Yangon, Myanmar, a man takes free water from clay jugs outside a Buddhist monastery. 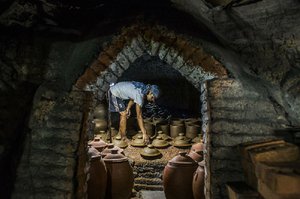 Photo by The New York Times/MINZAYAR OO
A worker places recently made clay pots and lids inside the heating facility of a clay pottery shop.