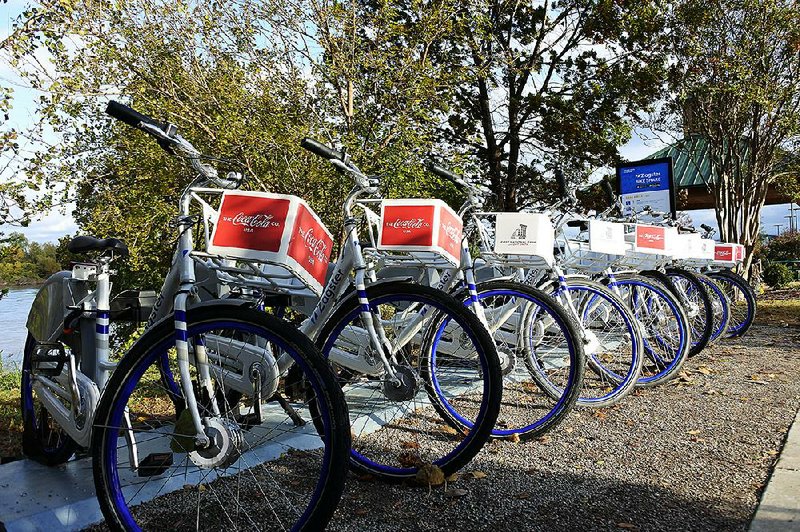 Bicycles stand ready at a bike-share station next to the Riverfront Park Events Building in Fort Smith as part of the “GO FS” Bikeshare Program, which began Thursday. - Photo by Thomas Saccente

FORT SMITH — Residents and visitors of Fort Smith now have a new way to get around downtown thanks to a public-private partnership.

City officials, members of the private sector and others gathered Thursday morning at the Riverfront Park Events Building to promote the “GO FS” Bikeshare Program. A ceremony held for the bike-share station featured 10 bicycles with baskets adorned with logos of either Coca-Cola Co. or First National Bank of Fort Smith.

City Administrator Carl Geffken said people can either pay $2 per half hour to use the bikes or pay for a $10 monthly membership. He estimated the bicycles had been accessible for about a month or month-and-a-half.

Other cities in Arkansas have been operating or exploring bike-sharing programs.

In 2017, Conway became the first large Arkansas city with a bike-sharing program, working with the University of Central Arkansas, Hendrix College and Central Baptist College. They use Zagster Inc., such as the one in Fort Smith.

The University of Arkansas at Fayetteville began a bike-sharing program in 2008. Ten years later, Fayetteville and UA became partners on an expanded program with Veo-Ride, a West Lafayette, Ind., company.

Little Rock and North Little Rock have explored bike-sharing programs. At one time, the twin cities — separated by the Arkansas River — considered a program. Later, officials decided to look into operating their own programs independent of each other.

New York and Chicago have had bike-sharing since 2013.

The Fort Smith Board of Directors approved a resolution on June 18 authorizing the mayor to sign an agreement with Zagster for operation of the bike-share program, according to minutes from that meeting.

In a June 12 memo to Geffken that was included in the meeting packet, Deputy City Administrator Jeff Dingman said the proposed agreement was for three years at a cost of $18,000 per year, with Zagster providing and maintaining ownership of all bicycles and equipment.

Fort Smith sought to offer such a program while working with the Western Arkansas Planning and Development District and the Frontier Metropolitan Planning Organization.

“The Frontier MPO has worked with community sponsors First National Bank of Fort Smith and the Coca-Cola Bottling Company of Fort Smith to secure funding and grants for the first year of the contract and is working on securing similar funding for the remaining two years of the agreement,” Dingman wrote.

Reese Brewer, director of the Frontier Metropolitan Planning Organization, said she put together the business proposal for the program. Coca-Cola and First National Bank each donated $10,000.

Larry Meador of Coca-Cola said the company believes the bikes can better connect the community by offering a different mode of transportation.

“By hopping on a bike, it is our vision that residents and visitors can enjoy exploring our great downtown and take a leisurely ride along the Arkansas River,” Meador said.

Meador said he hopes that as the bike program gains traction, it will expand through Fort Smith.

Sam Sicard, president and chief executive officer of First National Bank, said the program is a way to activate the city’s riverfront, as well as get families outdoors and active.