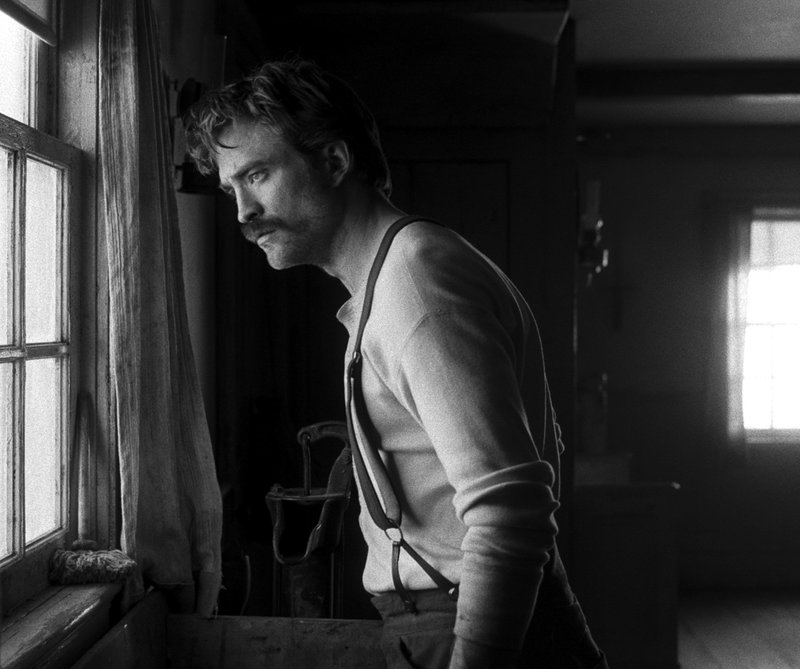 Ephraim (Robert Pattinson) is a young man with a secret who apprentices himself to a grizzled “wickie” in The Lighthouse, Robert Eggers’ psychologically intense study of madness and male bonding.

Robert Eggers' sole previous feature, 2015's The Witch, remains one of my favorite films of the decade. It was one of the first films I watched at Sundance that year, and my admiration of it -- at the time I wrote "Expertly constructed, with a startling use of both growing, incessant sound and eerie silence, Eggers, terrifying folk-tale captures a lot of the angst we feel confronting a natural world that we can't bend to our force of will" -- has only grown over time.

Set in 17th-century New England and meticulously crafted from existing folk tales and myths, the film captured the horror of the human condition and the essence of our deepest, most harrowing fears.

His new film uses a similar device, but while The Witch remained rooted in the realism of the New England countryside, this film is much more interested in the wild, chaotic lands inside our skulls.

With The Lighthouse, which premiered at this year's Venice festival before crossing the Atlantic to play at Toronto International Film Festival, Eggers once again treads into our deepest-seated sense of alienation from the natural world, those sea monsters and primordial terrors feared by sailors, on voyages through the darkest of oceans, and at the mercy of indifferent gods who consider human suffering an amusement. It doesn't have the succinct terrors of his first film -- it's far more subjective and peculiar, straying off into black-out drunken fits of chaos and surreality -- but it offers much of the same kind of unsettling tropes, set against an even more pitiless locale.

The idea of horror, of course, has always been deeply rooted in myth, from our earliest beginnings, those unknown things that terrified us made manifest and quickly canonized, as a way to explain them -- or at least acknowledge their existence as an explicable idea.

No modern filmmaker seems to understand this better than Eggers, whose first film utilized actual language from existing folk myths and incorporated it into truly terrifying work.

Set in early 19th-century New England, Willem Dafoe plays Thomas, an aging, half-mad Scottish wickie, manning the actual light of a lighthouse set on a desolate, isolated bit of rock near a jagged coastline. Robert Pattinson, meanwhile, plays Ephraim, a younger man with a somewhat mysterious past, who arrives at the island via barge as a would-be apprentice, dealing with the drudgery of the day's work for what is meant to be a four-week stint, before he can be promoted to another bleakly forsaken rock of his own.

The relationship starts out antagonistically: Thomas, flatulent and overbearing, orders Ephraim about as he would a servant boy, to the harshest and most imposing of tasks (including the cleaning of the septic tank); but, eventually, the two find some common ground, mostly at the bottom of a bottle, first drinking Thomas' whiskey, but, then, moving on to some deviant distillation of their lighter fuel.

As the two glory in their booze-soaked frenzies, the simple dimensions around them -- the lighthouse, the island, the sea, and sense of time -- start to shift and buckle into a rising climax of chaos. We begin with two men, alone on a barren, lonely rocky island that may or may not be haunted with the spirits of long-dead sailors, and end with their madness, and the inevitable death and annihilation of the most basic tenets of their existence.

Working as a kind of companion piece to his first film, Eggers creates a similar atmosphere of dread, while utilizing several thematically linked tropes -- substitute the desolate woods for the desolate ocean; and raving seagulls in place of a jet-black billy goat who might be the devil himself.

It's like a half-mad sea shanty come to horrible life, and twisting on itself in a swirl of frothing currents. Because Eggers constantly re-establishes what we are to consider real, and what is left in the buggered minds of these two drunken sots, we are on much softer ground than in his previous effort, the distinction between a pine forest ground, and the sand, I suppose, which makes the film less immediately unnerving, but no less impressive. 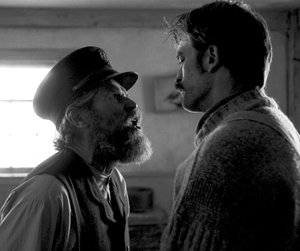