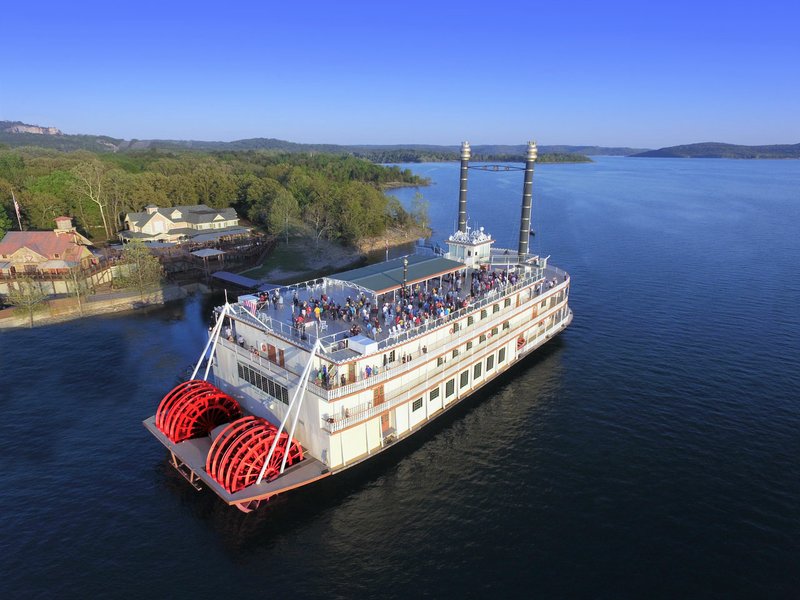 "It's almost like dancing, like an artform," James Plybon says of helming the Showboat Branson Belle. She is, after all, "a diva" who demands the best of her captain.

"Boats are typically known as 'she.' It's always been that way," explains Plybon, who has been with the Showboat for nine years. "You treat a ship like you would a lady: You're always kind and take care of her, and she'll take care of you.

"I do treat her like she's got a temperament," he admits. "She can make you look like a genius -- or like you can barely park your car. But she's a champ, the Belle."

Plybon didn't come from a nautical family. Instead, he fell in love with life on the water while he was a game warden around St. Martinville, La. As part of his job, he spent time on airboats, mudboats, john boats and pirogues.

"I would see all the big tugboats push into the bank, and they'd fish off them, and I got to talking to people and thought, 'That's where I need to be.'"

Having grown up in Missouri, Plybon of course knew about Silver Dollar City and the Showboat Branson Belle, which is also owned by the Herschend family. He came aboard and worked his way up through a mate's license to a master's license and is now the senior captain and operations manager for "the largest boat ever built for a landlocked lake."

Christened on April 13, 1995, the Belle is 278 feet long -- almost the size of a football field -- 78 feet wide and weighs 2.5 million pounds -- although Plybon jokes that he never says that part in front of her. He says most people don't realize that she is a true sternwheeler, propelled through the water by the two huge rear paddlewheels, each with its own motor weighing 7,500 pounds.

Maintaining a boat of that size -- capable of carrying 700 passengers per cruise plus the crew -- is not easy, and it's a challenge Plybon takes very seriously. He considers himself personally responsible for every guest who sets foot on board and adds that "you can't work for me if you don't share the same philosophy." With that in mind, every cruise starts with multiple counts of the passengers -- including service dogs -- and an assessment of their needs in case of emergency. "All of our marine crew are trained First Responders and firefighters," Plybon adds, and all of the deck hands must know how to dock the Belle in case of emergency.

Every week, staff members use ultrasound to measure the thickness of the hull from inside, looking for weak spots. And every winter, during the two months the Belle doesn't sail, divers videotape every underwater inch of the boat so it can be assessed. The tanks are serviced, and the motors are tested. "Maintenance is meticulous," Plybon says.

Plus, it all has to happen in the water. There is no place to put the Belle into dry dock. She hasn't left Table Rock Lake since she was launched -- which is another story Plybon delights in telling. The first two decks of the ship were built on land, and then workers slid it into the water on rails greased with environmentally friendly banana paste. She hit a speed of 14 mph on the way in, he says, laughing, which is faster than she'll ever go again. Cruising speed is 6-11 mph.

Plybon says while he spends most of his time being operations manager, he still gets to take the captain's wheel -- a solid maple wheel restored from the 1928 C.C. Slider -- and yes, it does steer the ship. (He has been asked if there are rails guiding the boat underwater. He's also been asked how they keep the tires aired up.) He catches the show as often as he can, he says, bragging that he thinks it's the best in Branson.

Nine years in, Plybon has no plans to go anywhere else.

"This is my Showboat," he says proudly. "There's a little joke at my house that the Showboat Branson Belle is the other woman in my life." 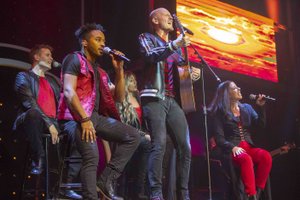 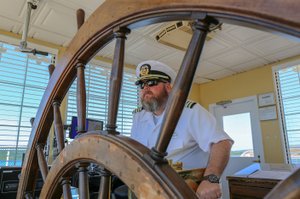 Photo courtesy Dalton Fischer "You treat a ship like you would a lady: You're always kind and take care of her, and she'll take care of you," says Capt. James Plybon of his ship, the Showboat Branson Belle.

Print Headline: All Hands On Deck!