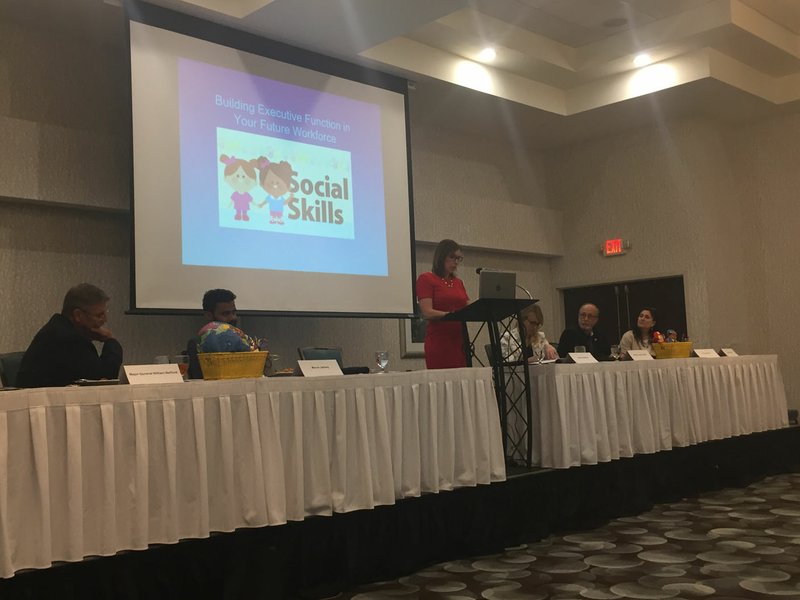 NWA Democrat-Gazette/DAVE PEROZEK Nikki Edge, a professor at the University of Arkansas for Medical Sciences, delivers a presentation on brain development during the Early Childhood Workforce Summit in Fayetteville on Friday.

FAYETTEVILLE -- A member of the family who founded J.B. Hunt Transport Services said Friday they plan to make a major investment in early childhood education programs in Northwest Arkansas.

Jane Hunt Meade, the daughter of J.B. and Johnelle Hunt, said her family has committed $1 million for 10 years to help cover child care costs and additional education for those working in the child care field.

To donate to Community Supporters of Quality Childhood Education, visit the Arkansas Community Foundation at arcf.org or call the foundation at 888-220-2723.

Meade made the announcement Friday toward the end of the Early Childhood Workforce Summit, hosted by Child Care Aware of Northwest Arkansas.

She called the family's investment "seed money" and encouraged those attending the summit to add what they can. Her group, the Community Supporters of Quality Childhood Education, has an account set up with the Arkansas Community Foundation. The group will start by focusing on four or five early childhood education centers in the region on a pilot basis, Meade said.

Speakers stressed the importance of affordable, quality care for young children and how that affects everything from the economy to national security.

Nikki Edge, a professor at the University of Arkansas for Medical Sciences in the Department of Family and Preventive Medicine, gave a brief lesson on how connections between neurons in the brain develop through everyday experiences.

Synaptic connections develop at a faster rate during the first three years of life than they ever do, making it a critical time in a child's development, she said.

"The key to a properly wired brain is the consistent presence of nurturing and responsive adults that interact with a child on a daily basis and provide the stimulation that they need to wire their brain properly," Edge said.

Not every child has access to a responsive, caring adult who will interact with them in a positive way, what Edge called "chronic understimulation" that will be reflected in their brain development.

"Instead of having connections in their brain that are strengthening literacy, language and communication skills, their brains are getting really strong in the parts of the brain that are responsible for fear and anxiety," she said.

Children with healthy brains are more likely to have the quality of being "teachable" and grow up to have the kind of soft skills employers crave, Edge said. Soft skills include things such as communication, collaboration and teamwork.

Mervin Jebaraj, director of the Center for Business and Economic Research at the Sam Walton College of Business at the University of Arkansas, noted concern about Northwest Arkansas' early childhood care.

One is the financial viability of child care centers, many of which are dependent on staying at full enrollment in order to pay all of their bills, Jebaraj said.

"So, this is where we find women with children between 0 and 6 dropping out of the workforce because they can't afford to pay child care," he said.

Jebaraj said employers need to seriously consider what they provide in terms of child care subsidies or directly provide child care themselves.

William Wofford, a retired U.S. Army major general and the former adjutant general of the Arkansas National Guard, spoke about the direct link between early childhood education and national security, he said.

Only about three out of every 10 American men and women ages 17 to 24 are eligible to join the military. The rest either haven't completed their high school education, can't pass a physical fitness test or have some kind of criminal record, Wofford said.

Wofford belongs to Mission: Readiness, an organization of retired military leaders seeking to strengthen national security by ensuring kids stay in school, stay fit and stay out of trouble.

"The importance of a child's earliest years -- and you've heard great comments about that already -- cannot be overstated," he said. "This is a critical time for infants and toddlers, during which their most rapid brain development happens. This early foundation, specifically from birth to age 3, informs a child's cognition, health and behavior throughout life."