Arkansas Tech University students will pay more next year to attend, after a board of trustees vote that raised tuition and fees for the Russellville and Ozark campuses.

The increase is driven largely by a rise in mandatory fees, including a new fee approved by Arkansas Tech's Student Government Association for a student union and recreation center. Tuition also will rise as the university plans to spend more on faculty and staff salaries.

Out-of-state students will pay twice that amount if they do not have a tuition waiver.

The increases are necessary for maintaining the school's priorities, outlined in the budget, university President Robin Bowen said in a news release.

"As a result, we prepare to enter a new fiscal year with a balanced budget that will allow us to continue investing in students in a manner consistent with our strategic plan," Bowen said in the release.

The cost approved Thursday is more than the $9,188 approved last week by University of Central Arkansas trustees in the first of several state university system votes to approve budgets and the prices of tuition, fees, room and meals.

Last year, at the request of Gov. Asa Hutchinson, Arkansas' public universities did not raise tuition. Instead, they raised only fees. Annual tuition increases, long blamed on stagnant state funding that doesn't keep up with inflation and other needs, had been standard in Arkansas for years before last year's freeze.

Public colleges and universities nationwide are increasingly reliant on tuition and fee revenue to support and expand their operations. Meanwhile, colleges battle one another for new students and stare down long-term reductions in high school graduates.

The increased tuition and fees have helped create student-loan debt that now totals more than $1.5 trillion nationwide and is often blamed, along with stagnant wages and cultural changes, for declines in homeownership and birthrates.

The cost of college is gaining more attention among Democratic presidential candidates, who have called for varying levels of free tuition programs and even the canceling of most borrowers' current debt.

Arkansas Tech's tuition and fee increases coincide with a 3% budget increase to $173 million from $168 million. That increase is in part because of 1% across-the-board salary increases, promotion and tenure adjustments and an increase in the state's minimum wage, Bowen wrote in a letter to trustees.

The employee raises are necessary to compete against other schools to "recruit and retain high-quality employees" who can help students succeed and fulfill the school's strategic plan, university spokesman Samuel Strasner said.

"Offering competitive compensation and benefit packages is part of competing in that marketplace," Strasner said.

The facilities fee increased the most, by 12.5% from $16 to $18, as the university embarks on the construction of a student union and recreation center. The university is also renovating the physical education building to be a multipurpose space.

Student feedback during the most recent campus master planning process showed that a student union and recreation center are among the university's "greatest needs," Strasner said. When it opens, it will become the "heartbeat" of the campus and better connect students, help recruit and retain students and host more evening and weekend student activities, he said.

Ozark campus, concurrent and online students will not have to pay the public safety, student activity or the student union and recreation fee. 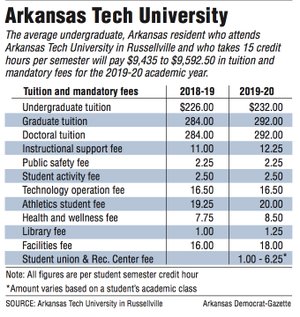