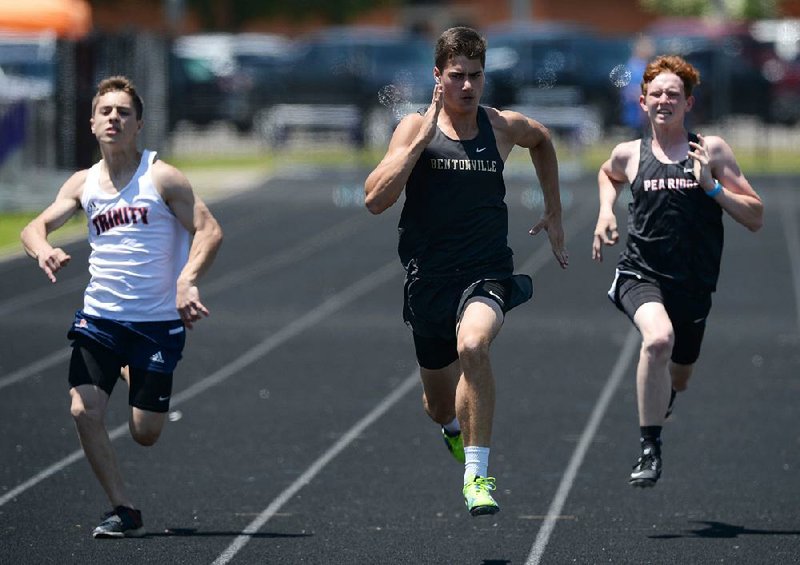 FAYETTEVILLE -- Ty Graser stuck to his plan, and it put him in a familiar position Wednesday afternoon.

Conway's Cary McClain was a close third at 3,301 points.

Graser was in the same position last year when he enjoyed a 38-point lead after the first day, but he wound up with a fifth-place finish while McClain finished seventh.

"It's just like a hard situation," Graser said. "You feel great about yourself. You finished five events -- a full day of competition. But everything comes down to day two, and that's what will matter. I need to focus on that and hopefully win it."

Graser only had a two-point lead before the 400 meters started, and he knew what to do since Johnson and McClain already had run in their flights.

"I don't think any of my events went exactly the way I wanted, especially when everybody wants to be No. 1 in it," Graser said. "I kept each mark and each time on pace with the plan, and it was good. It was pretty good. Moderate marks equal good points, which equal good overall.

"Jogging was really a big thing in getting ready for the 1,500, which I'm not sure if I can do good in it. Throwing was big last year, and I really messed up in discus. I didn't get many points for it, but this year I've practiced it and putting it out there for a good amount of points."

Sebastian Frazier of Springdale was in fourth place at 3,244, just four points ahead of defending champion Haze Farmer of Lake Hamilton.

Farmer, who is trying to become only the second person to win back-to-back heptathlon titles, was in sixth place after the first day a year ago, and there's also the pole vault that is included with today's five events.

Farmer, a Georgia signee, broke the Class 5A and state overall records in the pole vault when he cleared 17 feet, 31/4 inches at the state meet earlier this month in Lake Hamilton.

He currently owns the decathlon record in the pole vault when he cleared 16-51/4 last year.

"I feel like it's a personal goal to do this," Farmer said. "I really want to win this again, and it went way better than I thought. I set a PR in everything but the 400 and the 100.

"I really don't get to train for a lot of the events we do here. It's usually waiting for pole vault to take me to the top, but I'm sitting in a pretty good spot. I just need to jump 18 feet. It's what I can jump. I just need to get on the right pole at the right time."

Print Headline: Graser finds himself on top after one day for second time