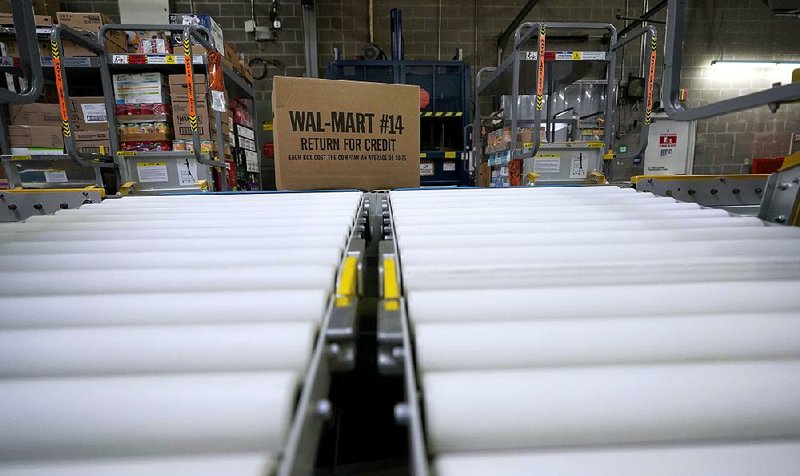 In this Nov. 9, 2018, file photo a box of merchandise is unloaded from a truck and sent along a conveyor belt at a Walmart Supercenter in Houston. Walmart is rolling out free next-day delivery on its most popular items, increasing the stakes in the retail shipping wars with Amazon. The nation's largest retailer said Tuesday it's been building a network of more efficient e-commerce distribution centers to make that happen. (AP Photo/David J. Phillip, File)

Walmart Inc. is matching e-commerce rival Amazon.com by offering free next-day delivery of online orders of $35 or more. The move comes two weeks after Amazon said it would offer free one-day delivery to its Prime customers, who pay a $119 annual membership fee.

Marc Lore, president and chief executive officer of Walmart e-commerce U.S., said on Tuesday that free next-day delivery will be available on orders of its most popular items, which vary by customer location.

The service is now available to Walmart.com customers in Phoenix and Las Vegas, Lore said in a news release, and will soon expand to Southern California. Walmart will gradually roll it out nationwide, he said, with a goal to reach 75% of the U.S. population this year.

Online shoppers can browse up to 220,000 of the most frequently purchased items, from diapers and laundry detergent to toys and electronics. More of Walmart.com's merchandise will eventually be added.

Walmart already offers same-day grocery pickup and delivery options in many locations, as well as free two-day shipping on millions of items.

Carol Spieckerman, a retail consultant and president of Spieckerman Retail, said Walmart's entry into next-day delivery accomplishes more for the Bentonville retailer than providing convenience for its customers.

"Shoppers that otherwise wouldn't think of Walmart stores as a primary destination can easily rationalize purchasing on Walmart.com for delivery if the price is right," Spieckerman said. "As Amazon continues to hike its fees for Prime membership, Walmart's fast and free shipping stands out as a clear advantage. It puts Walmart in a pure price comparison scenario that could even woo Amazon Prime members that 'do the math.'"

Analysts had been expecting Walmart to add a one-day shipping option ever since Amazon's April 25 announcement. Investment bank UBS wrote in a note Monday that the service could cost Walmart $215 million in incremental investment, based on online sales. The UBS analysts described these costs as "pretty manageable."

Lore said next-day delivery will actually save Walmart money, thanks to its vast network of warehouses across the U.S. "Eligible items come from a single fulfillment center located closest to the customer," he said in the news release. "This means the order ships in one box, or as few as possible, and it travels a shorter distance via inexpensive ground shipping.

"That's in contrast to online orders that come in multiple boxes from multiple locations, which can be quite costly," he said.

The service will help establish Walmart's position as an e-commerce retailer both in the industry and the public, said Keith Anderson, senior vice president of strategy and insight for e-commerce analytics firm Profitero.

Until Walmart acquired Jet.com and Doug McMillon took the chief executive position, Anderson said, many wondered if the company could establish itself as "a compelling alternative to Amazon. And where I think they've really got a clear and compelling position is as a truly low-cost alternative."

"You don't need a membership," he said. "You don't have to pay an annual fee. And while you may get fewer services and add-ons bundled as a result, you're not going to have to sacrifice much in terms of convenience. Prices are going to be as low or very close to it, and you'll ultimately save money.

"It's going resonate with the profile of a household that's never been a Prime member because they can't rationalize paying $120 a year just for the privilege," he said.

Anderson said Walmart likely had been planning the move long before Amazon's announcement, and that it's no coincidence Walmart's own announcement came just two days before it releases its first-quarter earnings report.

"They're probably focused on making sure investors are always seeing Walmart making the right moves to keep up with Amazon or do things that Amazon won't do," he said. "They probably wanted to have news to highlight to investors as just another way Walmart is serving its customers differently and, you might argue, even more appropriately than some of the alternatives."

Walmart is scheduled to report first-quarter results before the markets open Thursday.