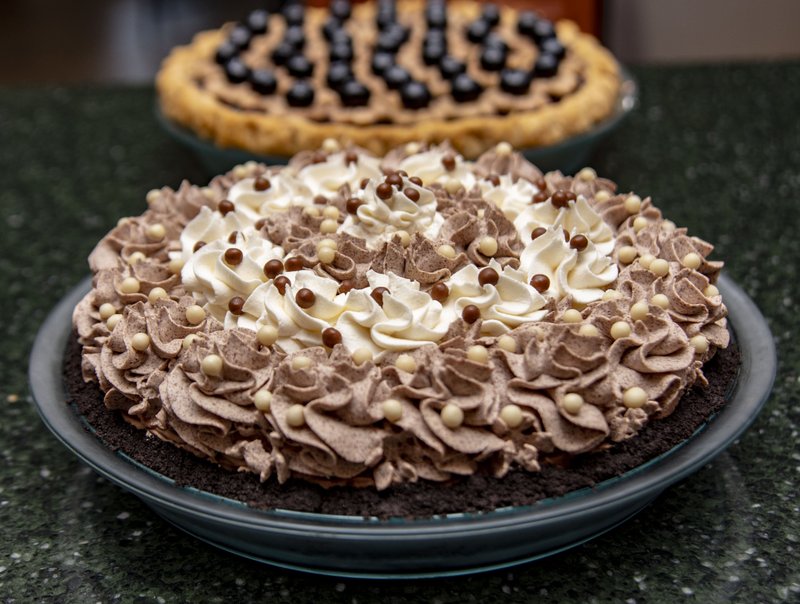 The decadent Denali Caribou Crunch Pie (foreground) was inspired by a vacation to Alaska. Photo by Cary Jenkins

Rhonda Hull was working at the Little Rock offices of Mountaire Farms on a Monday morning last month when it really hit her.

On April 13, her Denali Caribou Crunch Pie won Best in Show and $5,000 at the 25th National Pie Championships in Orlando, Fla.

"Our CFO sent out an email to our corporate office announcing it," she says, and that was when her accomplishment finally sank in. After a harried few days of baking in a strange kitchen and competing against amateur bakers from all over the country, her pie, a gorgeous, decadently rich and crunchy concoction of cream and chocolate and cookies and caramel and toffee and other goodies, took top honors.

Her Best in Show prize was part of seven total first-place blue ribbons she won at the competition that featured 185 entries in 16 categories.

Not bad for someone who shattered a Pyrex plate in an early attempt at pie making.

Hull, an executive assistant at Mountaire, is in her west Little Rock home talking about pies and baking competitions.

Chief taste tester and husband, Jeff, who retired recently from Reynolds American, Inc., is taking photos with his phone to send to the American Pie Council's social media.

Rhonda Hull grew up in southern Missouri, but considers Kansas City, her hometown.

She mostly baked cookies when she was growing up. The glass pie plate got broken when she placed it in water while it was still hot, and that put her off pies for a while.

It was one Thanksgiving in Kansas City that she realized she could bake her way around a pie.

Her mom, a pretty talented baker herself, was coming for the holiday and Hull knew she couldn't ask her to bring a pie, so she got to work on her own. She thinks it was a pumpkin or pecan pie.

"I made the pie crust, but got sidetracked and covered it up and put it on top of the refrigerator to clear the counter space," she says. "When I went back to it, it was really good, and I thought 'I can make a pie, too.'"

Hull still uses her mom's rolling pin when she bakes. 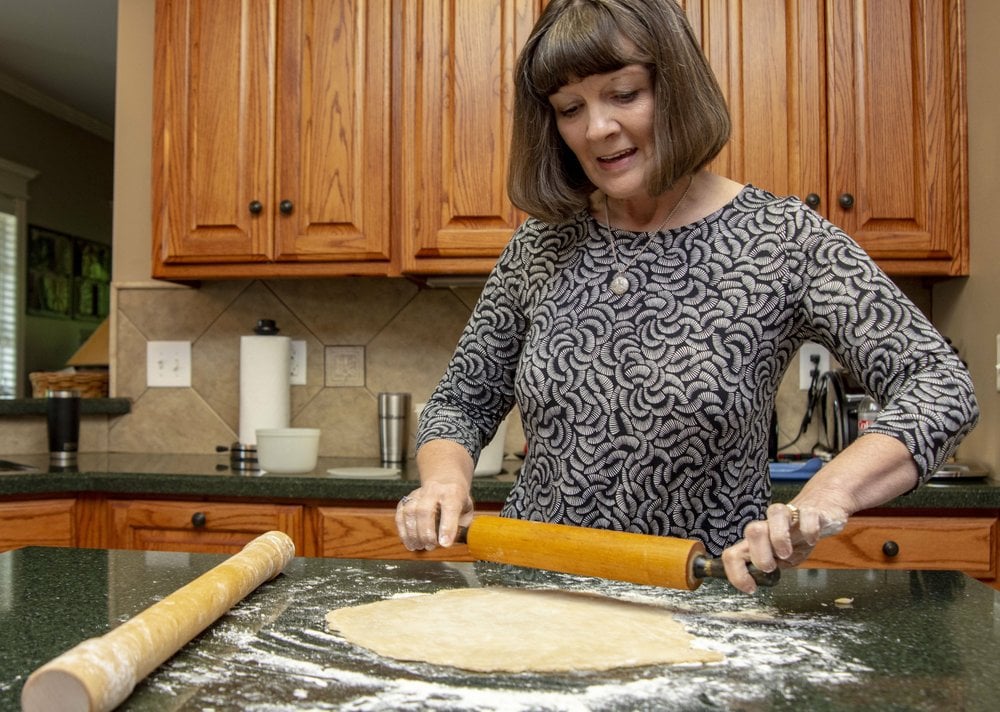 "When she passed away, it was one of the first things I grabbed," she says.

In 1992, she and Jeff moved to Evansville, Ind., where she tested her recipes on their neighbors.

"Jeff's mother and his grandmother were excellent bakers, so I felt like I had to step up to compete with them," she says.

They moved to Little Rock in 1996 and she made treats for her children's school functions, but then homemade goodies were banned and the kids could only take store-bought sweets to school.

Still, baked yummies were a constant at the Hull house.

"I always had something sweet at home — cookies, cakes, pies, cinnamon rolls, whatever," she says. "Jeff's mom would always have a dessert baked when we went home. His grandmother always brought stuff to us when she came to visit. It's just a part of our life."

As evidence, along with a blueberry pie and a Denali Caribou Crunch sitting on her countertop during this interview, there is a bowl full of leftover pie crust pieces Hull baked after brushing with butter and topping with sugar and cinnamon.

With the kids grown and out of the house, the chance to exercise her competitive streak and win a blue ribbon became too strong to resist. In 2013, Hull entered both the arts and crafts and the cooking competitions at the Arkansas State Fair.

She got her blue ribbon with a Raggedy Ann doll she made, but then the real work began. Hull had entered a whopping 33 categories in the cooking competition.

"Cakes, breads, cookies, candies, pies, ethnic food -- you name it, I cooked it."

She won "six or seven" best in shows and "lots" of first places, she says.

In 2014 she backed off a bit and only entered about 30 categories.

She first competed at the National Pie Championships in 2016. Unlike a televised baking competition, baking for the national championship, held at SeaWorld Orlando Renaissance Hotel, is done off-site. This means Hull is working in a rented condo in a strange kitchen with a potentially unreliable oven.

"The biggest stress is going to Florida and being in someone else's condo," she says. "You don't know what their oven is like."

The first thing she does after arriving at the condo is turn on the oven and put in an oven thermometer to see how accurate it is.

"Then we see if panic strikes," Jeff says.

The self-taught Hull has won first place at past championships, but never was best in show until this year.

The pie that put her over the top was her entry in the Favorite Vacation category, which asked contestants to create a pie inspired by a memorable trip. She and Jeff had recently vacationed in Alaska, where Hull came up with her Denali Caribou Crunch.

"It just flowed," she says. "The caribou is brown and has a white chest and a white rump, so I thought, brown and white pie. My biggest challenge was getting the crunch in there."

A caramel and pecan layer "serves as a recollection of water flowing over rocks in streams," Hull wrote in the text describing her creation to the judges. 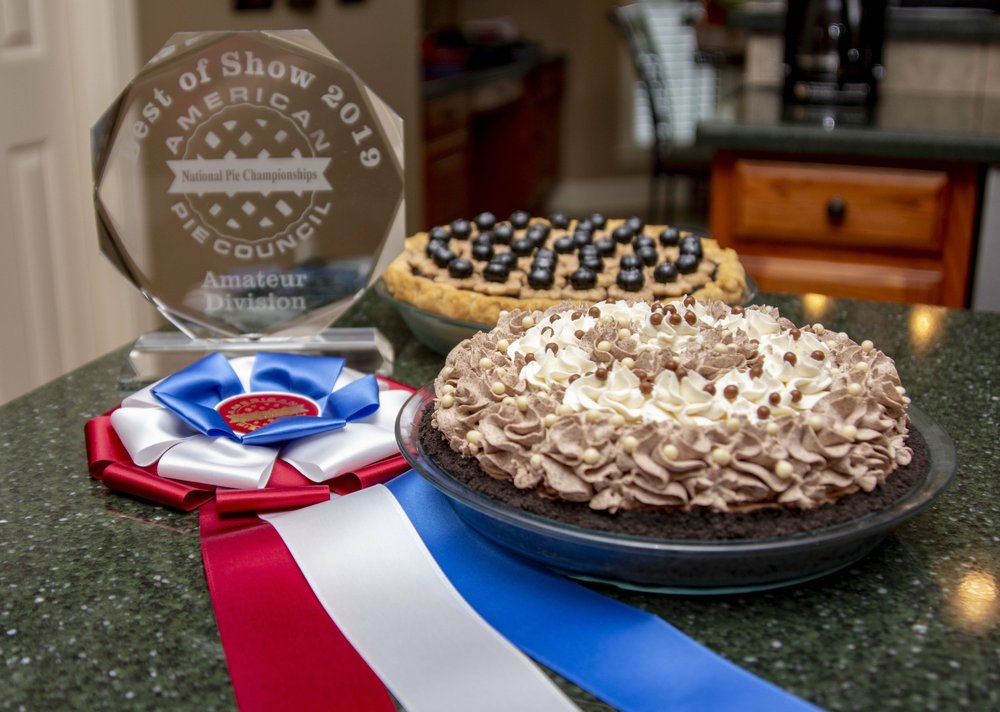 Although she had won first-place prizes before, this was Rhonda Hull's first Best in Show award in the national competition. Photo by Cary Jenkins

The recipe is posted at piecouncil.org/2019Amateur.

Hull entered 11 categories and won first place in seven. The recipe for her I'm So Blue Blueberry Pie is below.

She won $6,400 in prize money at this year's national championships, which she will put toward her work with the Quilts of Valor Foundation.

"We make quilts and give them to veterans," she says. "If you have served you can be nominated to receive a quilt. Our chapter tries to focus on WWII vets. None of us would be able to do what we do on a daily basis if it wasn't for these veterans and our current military that is serving. I feel it's the least I can do."

With so much success, one would think that Hull might consider going pro and selling her pies.

"She's such a perfectionist," Jeff begins with a chuckle, "it might take her seven or eight times to perfect the pie the way she wants it. Then it takes her two hours to make a pie, you'd have to sell the pie for $150-$200 a slice to make any money."

Hull is perfectly happy with her amateur status.

"I don't think it would be fun if I had to get up and do it every single day."

Her husband wonders about her goals for the 2020 championships.

"She won seven first places, plus best of show. What will her standard be for next year?"

"I would like every pie I enter to place," Hull says. "That's the new challenge. It doesn't have to be first or second, I'd be happy with third. I would just like to have each pie recognized for the effort that went into it." 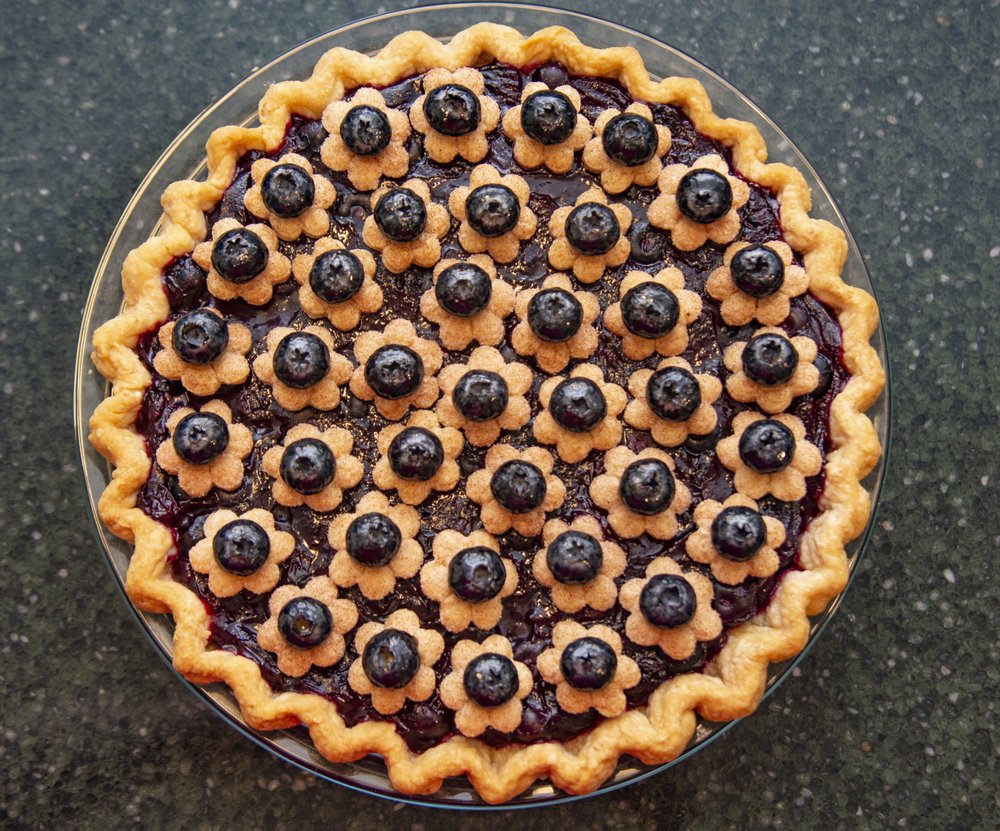 In medium bowl, mix flour, salt and sugar. Cut shortening into flour mixture until shortening pieces are the size of small peas. Sprinkle in ice water, 1 tablespoon at a time, tossing with a fork until all flour is moistened and a ball of dough can be formed. Add more water if necessary. Refrigerate dough 30 minutes or until ready to roll.

To make the cheesecake layer:

Bake 18 to 20 minutes or until almost set. Cover crust with foil if browning too quickly. Remove from oven to wire rack. Cool completely.

In a medium, heavy duty pot, combine the sugar, cornstarch and salt. Add half of the blueberries and ¼ cup water. Cook over medium heat, stirring constantly until blueberry mixture thickens and turns a very dark purple (this will take several minutes). Remove from heat and stir in lemon juice and butter. Gently fold in remaining blueberries. Let mixture cool to room temperature.

Decorate top of pie with whipped cream or pie crust cutouts that have been previously baked.