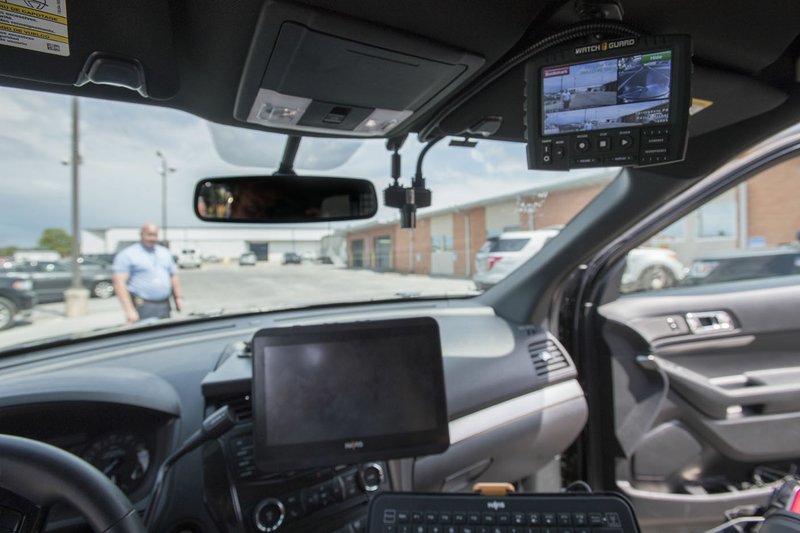 NWA Democrat-Gazette/J.T. WAMPLER Springdale police Lt. Jeff Taylor shows a new dash camera system Tuesday May 14, 2019 installed in a cruiser. There are currently 34 cars with the new system and the city council is looking to add more than 50 more.

SPRINGDALE -- Police officers soon will have another tool to serve and protect residents. The City Council on Tuesday night approved a $447,815 purchase of cameras for police cars.

The council will meet Monday night to determine how to pay for them.

Peters gave the report as a part of a department update, but didn't ask for replacement cameras. "That was a lot of money," he said. "I just wanted to let them know the cost was coming in the future."

Councilman Jeff Watson expressed concern Tuesday buying dash cameras was coming before the council so soon. He said the council agreed to consider buying cameras during its meeting May 20.

"We all agreed the dash cams were something we needed to deal with, but we need more time to determine how to pay for them," Watson said.

Councilwoman Kathy Jaycox told the council Tuesday she called Mayor Doug Sprouse on May 7, the day after the committee meeting and Peters' report. She asked Sprouse to put the cameras on the next council agenda for approval, rather than waiting another two weeks until the next meeting.

"We've all heard nationally about police claims," Jaycox said. "When we ask as a community for the police to keep the peace, protect the citizens and represent this city, when we ask somebody to risk their lives every single day for us, we need to take the safety off and let them go out to the community to protect us."

Overton motioned Tuesday to approve replacing all the Safe Fleet cameras and pay for them through the general fund until a clear source of money could be determined. "Let's go whole hog," he said.

The city has the money for the cameras, Sprouse said. It could come from $500,000 in budgeted pay for Police Department positions remaining unfilled or drug seizure money returned to the city from the county and state. He also expects sales tax revenue to increase and again when the state starts collecting tax on Internet purchases in July.

Buying the cameras two weeks earlier helps the department, Peters said. Watch Guard will deliver 20 cameras on the first week of the order and 20 a week until the order is filled, he said.

And buying 75 dashboard cameras -- plus four cameras for interview rooms -- earned the city a $20,000 discount he said.

The Watch Guard cameras offer a dash or wide-angle view, said Lt. Jeff Taylor. The wide-angle view will be helpful as officers move off the road to do field sobriety tests or an officer wrestles a suspect into a drainage ditch at the side of the road.

Another camera installed above the back seat of a patrol vehicle will allow the officer to watch a prisoner's behavior.

The cameras operate like DVR recorders, Taylor said. Although filming all the time, the cameras "write" when a patrol car's lights come on or the officer turns the camera on.

A case in Little Rock sent officers to the dashboard camera coverage to determine a delivery truck driver clipped the side of a police car. "They saw the car rock as the truck drove by," Taylor said. The footage proved essential in finding the hit-and-run driver.

And officers have a few hours to retrieve video recorded but not written.

Sgt. Darrel Hignite said a GPS system integrated in the camera system will help officers pinpoint where a crime happened.

Capt. Lester Coger said in a recent officer-involved shooting, suspect threw drugs, firearms, all kinds of things out of the window of the car fleeing the scene. The cameras recorded the chase and GPS helped officers find and retrieve evidence, Coger said. 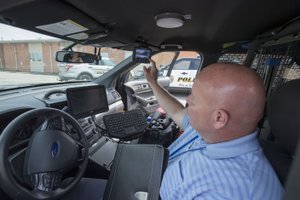 NWA Democrat-Gazette/J.T. WAMPLER Springdale police Lt. Jeff Taylor shows a new dash camera system Tuesday installed in a cruiser. There are 34 cars with the new system and the City Council is looking to add more than 50 more.