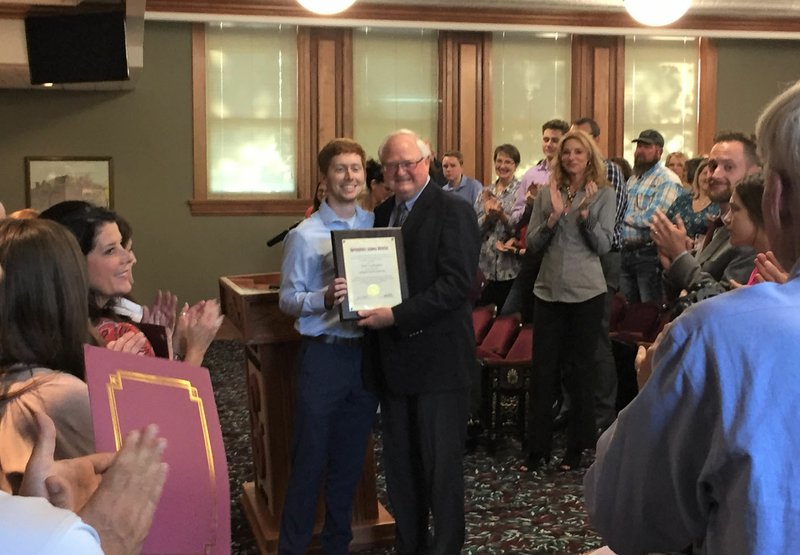 NWA Democrat-Gazette/DAVE PEROZEK Joel Lookadoo, left, poses for a photo with Superintendent Jim Rollins after Lookadoo was announced as the Springdale School District's teacher of the year at Tuesday's School Board meeting. Lookadoo, a ninth grade algebra teacher at Lakeside Junior High School, has been a teacher for six years. He is now eligible for state teacher of the year, which will be announced this fall.

SPRINGDALE -- The School District will allow high school students to do an independent study in computer science starting this fall.

The School Board unanimously approved the proposal at its meeting Tuesday without discussion.

Students must have compiled at least a 2.75 grade point average across a series of four semester-long computer science classes to be admitted into the independent study program, said Marcia Smith, associate superintendent for curriculum and instruction.

"So our students start in 10th grade taking these courses, and by the end of 11th grade, they've met the requirements," Smith said.

The state Department of Education allowed Springdale to move forward with an independent study program as long as the board approved it, she said.

Students and their teachers will start by working together on a plan for their independent study. The plan will include tasks to be completed, due dates for each task and estimated hours to complete them. Students will keep a portfolio of all activities, and the portfolio will be graded.

"They can do stuff working with people within our district. They can work with different people outside. But it will be facilitated by a teacher," Smith said.

At least 60 hours of work will be required to receive half a credit. They may earn another half-credit for an additional 60 hours, Smith said.

Also at Tuesday's meeting, the board celebrated this year's retirees, including teachers and administrators.

DeBusk worked as an educator for 47 years, including the past 23 in Springdale. He gave a brief speech in which he urged people to remember education is "all about the kids." And when kids end up in detention, it doesn't mean they're bad; it only means they made a mistake, he said.

The board also heard the announcement of the district's teacher of the year. Joel Lookadoo, who teaches ninth-grade algebra at Lakeside Junior High School, has been an educator for six years.

He received his bachelor's degree in secondary math education from the University of Central Arkansas and his master's degree in educational leadership from Arkansas State University, according to information provided by the district. He is National Board certified.

Lookadoo is now eligible to compete for the state teacher of the year, which is expected to be announced this fall.