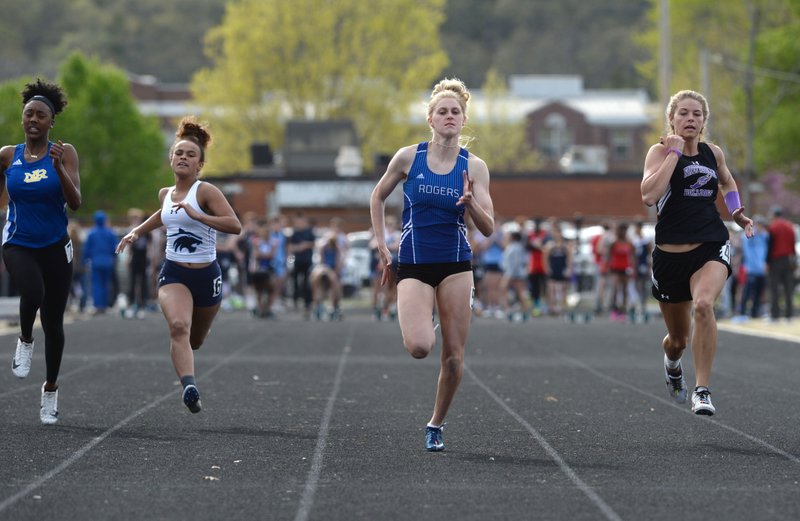 ROGERS -- Ashlyne Silcott says she is ready to close the book on her high school track career, but not without the opportunity to add one more good chapter to it.

The Rogers High senior will try to do that over the next two days as she competes in the Arkansas high school girls heptathlon, which will be held in conjunction with the boys' decathlon at Fayetteville Ramay Junior High.

WHEN Today and Thursday

"It's been a long 6 years, and I've met a lot of my goals," Silcott said Monday afternoon. "It's been so much fun, but I'm ready to put this to rest and see where my education and college will take me.

"I still want to go out on a good note and leave my mark at the school, maybe get a school record, hopefully. I feel like I contributed to the team over the years, so I feel good going out."

This will be Silcott's third year to compete in the heptathlon, and she said she would be satisfied if she could finish in the top three and break the school record of 3,572 points set by Hannah Martin two years ago. Silcott was there when Martin accomplished her feat and finished 15th with 3,502 points, then climbed to ninth place in last year's event with 3,702 points.

One of the lessons Silcott has learned in the previous two heptathlons is not to pile pressure on herself, and if there is any pressure on Silcott's shoulders, it won't come from Rogers coach Becky Efurd.

"She's worked so hard for me all these years," Efurd said. "I told her she just needs to go out and have fun with this one. There's not a lot of things we can tweak at this point.

"The thing we are working on is getting her fresh legs because she's been busy the last couple of weeks with the conference and state meets and the Meet of Champs."

Most of the events fall in Silcott's favor, and the first day of competition could set her up nicely for the second day. Those events include the 100-meter hurdles, the long jump and the 200 -- all events she has done at one time or another in meets this season.

Her question marks lie in the throws. She will have to do the discus today, then throw the shot put during Thursday's competition.

"Other than the discus, the other three are the events I usually do at a normal track meet," Silcott said. "I'll focus on doing my strong points, and of course you want to do well in your weak points and try to improve on your scoring. If you emphasize and elevate what you are good at, that will get a significant amount of points.

"Obviously, I'm not a thrower at any means. I just work on the discus leading up to the heptathlon. I don't really work on it during the season because we're focused on what we do at conference and state meets."

The 800 may be the one event that could help Silcott, even though she doesn't do it that much. Efurd saw it first-hand during last year's event when Silcott ran the distance in under 2 minutes, 40 seconds.

"She can run a good 800," Efurd said. "I teased her after that last year and said she's going to run cross country in the fall. I probably should have used her in the 4x800 or something like that because if she could get down around the 2:30 mark, that would help. I think that's what helps her because she has that little bit of distance and stamina in her."