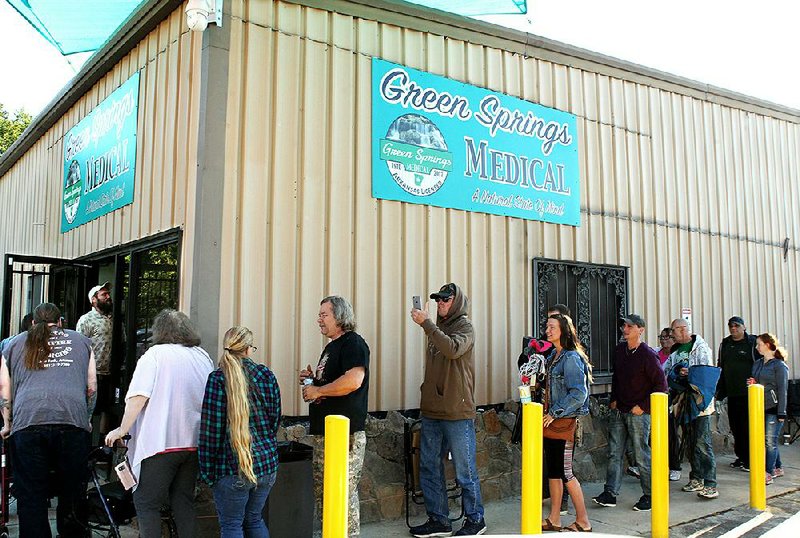 About 70 people were in line outside Green Springs Medical, a marijuana dispensary on Seneca Street in Hot Springs, when it opened after 8 a.m. on May 13. The dispensary was one of two to open in the state over the weekend; the other, Doctor’s Orders RX, also is in Garland County. - Photo by Richard Rasmussen

LITTLE ROCK, Ark. -- The first two medical marijuana vendors in Arkansas sold over 26 pounds of the drug during the first few days of sales, the state Department of Finance and Administration said Tuesday.

The two Hot Springs dispensaries, Green Springs Medical and Doctor's Orders RX, are charging $15 per gram the Arkansas Democrat-Gazette reported. That means the first few days of sales was around $176,895.

Under the law, medical marijuana cannot be manufactured in a way that would appeal to children, such as in cartoon character shapes or in "familiar" foods like candy or brownies.

Scott Hardin, a spokesman for the department, said in a news release that the two dispensaries totaled over 2,258 transactions, which is defined as a purchase of any individual strain. This means the average transaction was $78.34.

Patients and spokesmen for the companies noted that around 200 people waited in line at Doctor's Orders RX on Saturday morning, which was the first full day of sales. Lines were considerably smaller but continued on Sunday and Monday at both dispensaries.

"They were all so nice," she told the Democrat-Gazette. "They gave us water and helped pick which strain would help us the most. I was very impressed."

Patients or their registered caregivers can purchase medical pot if doctors have confirmed that the patients suffer from one of 18 eligible conditions. As of Friday, the Arkansas Department of Health had issued 11,739 medical-marijuana registry ID cards.

Regulatory difficulties and court disputes hindered cultivation businesses from opening up shop. Once matured, the medical-cannabis market in Arkansas will feature 32 dispensaries across the state and five cultivation facilities. The drug used in Arkansas must be grown and treated in the state.