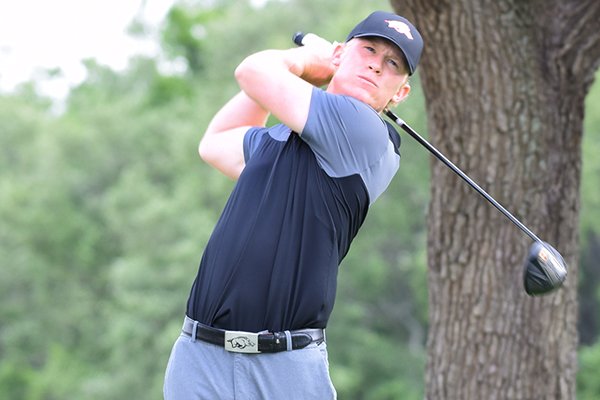 Arkansas junior Tyson Reeder tees off during the third round of the 2019 SEC Tournament in St. Simons Island, Ga.

FAYETTEVILLE -- The University of Arkansas men's golf team had a solid fall season but opened the spring by finishing in the back half of the fields at four consecutive events -- the Sea Best Invitational, The Prestige, the Querencia Cabo Collegiate and the Valspar Collegiate.

The Razorbacks bottomed out March 18 at the Valspar in Houston, when they finished 14th in the 15-team field, 42 strokes behind Wake Forest and 36 behind Auburn.

When Today through Wednesday

Format Three rounds of stroke play, top five teams from six regional sites advance to NCAA Championships at The Blessings on May 24-29

Arkansas has advanced to an NCAA regional 26 times and has moved on to the NCAA Championships 22 times. … Arkansas Coach Brad McMakin is in his 13th year and has led the Razorbacks to an NCAA regional in 12 of those seasons. … The Razorbacks have won at least one event for the 13th consecutive year. … Every Razorback has won a tournament title in the past two seasons. … Arkansas’ top individual finishes are by NCAA champion R.H. Sikes in 1963 and NCAA runner-up by current junior Mason Overstreet in 2017.

Junior Tyson Reeder had seen enough. He approached Coach Brad McMakin about holding a players only meeting to reset the team's focus, which he did with classmate Mason Overstreet.

"We all needed a reality check," junior William Buhl said.

"The meeting was kind of like, 'Hey guys, we've got to figure something out here,' and me being ... an upperclassman, I was kind of a leader.

"I wanted the guys to challenge everybody and challenge myself to know that like, 'Hey, let's do everything we can do. Work hard. Attitude is right. Get in the gym and take care of our school work. If we don't make the national championship, then we can live with that. But we can't live with the fact we're just going through the motions.' I feel like ever since that players only meeting the tide has turned, and we're ready to make a good run at regionals and the national championship."

The Razorbacks rebounded immediately, taking fourth at an event in Augusta, Ga., then winning the Git-R-Done Husker Invitational. After finishing seventh in the stroke-play portion of the SEC Championships, the Razorbacks downed No. 4 Vanderbilt, Texas A&M and No. 13 and defending champion Auburn to win the school's second SEC title.

They'll take that momentum into the NCAA Austin Regional starting today at the University of Texas Golf Club. Arkansas, the sixth seed, must finish in the top five to qualify for the NCAA championships at The Blessings starting on May 24.

"We are a six seed, but I think we're better than that," said freshman Julian Perico, who won all three of his matches at the SECs.

McMakin said the team meeting was a spark.

"It was more about the focus on getting better at the right time and being prepared," he said. "[Reeder] just wanted everybody to do better where they were struggling. Obviously it went well and things turned around.

"The talent has always been here. This is definitely one of the most talented teams I've ever had, and for them to come together at the right time and beat the three teams in a row of that caliber was pretty amazing."