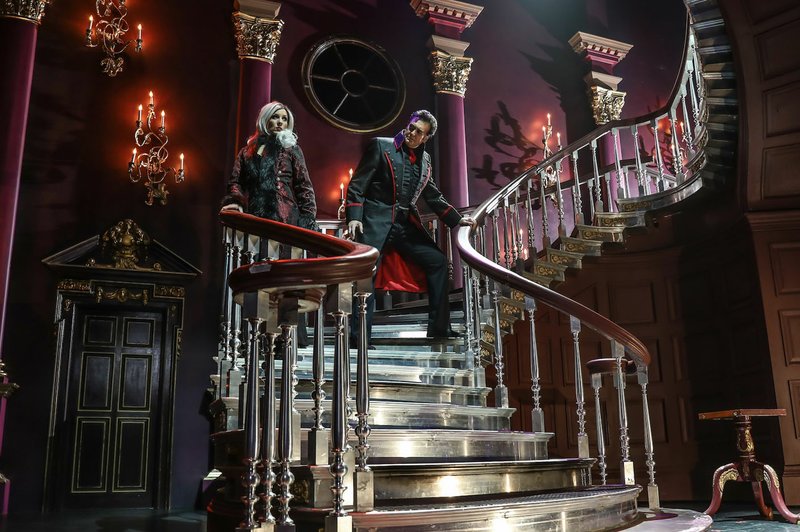 Courtesy Photo Rick Thomas is joined on stage by his wife, Tara, who came from Zimbabwe to try out for his show. Three years later, they were married.

Rick Thomas has been performing since he was a child. He starred on more than 300 cruises and spent 15 years headlining in Las Vegas. He's won the coveted title Magician of the Year from the Academy of Magical Arts and Magic; Illusionist of the World from the World Magic Awards; and been featured on numerous national television specials including the NBC series "The World's Greatest Magic," "Masters of Illusion" on the CW and his own special on ABC.

All that said, Thomas says he counts his blessings every day that this is his sixth season in Branson.

"Yes, Vegas was an amazing part of my life, but the quality of life here and the opportunity to present my production at the Andy Williams Performing Arts Center has been and continues to be amazing," Thomas says. "Jimmy Osmond approached me while I was in Las Vegas and asked that I bring my show to the Andy Williams Theatre. I never planned on performing here, but made a decision to move the show to Branson, and it changed my life."

Thomas started performing as a dancer when he was 5, began his magic career at 7 and by 18, he was performing his own production at the Disneyland Hotel.

"My parents and grandparents were already active in the ballroom dancing arena, and at the age of 5 I began teaming with his sister, Tamara, in ballroom dance competitions," he explains. "Our hard work earned us the title of Amateur United States Ballroom Dancing Champions while in our teens.

"Luckily the dancing was a major influence as an illusionist," he adds. "The ballroom dancing that I learned while competing across the country has given me an appreciation for all the arts and how all types of entertainment can be woven into one show."

Thomas says this year's show, "Mansion of Dreams," "goes far beyond the magic and far beyond any illusion show."

"'Mansion of Dreams' has been years in the making, and it is instant WOW," he says with obvious delight. "It may sound cliché to say that there are no words to describe this show, but I find it difficult to express the magnificence of this production. This live show is a journey never to be forgotten, where the audience members become invited guests at my home. They visually move through the mansion and witness the beauty and mysteries behind its walls.

"Contained within the production are the most intriguing, innovative and mind-blowing grand illusions in the world," Thomas enthuses. "Epic is the word that best describes the incredible production. There is no show like it in the world -- and it is right here in Branson!"

Thomas is joined on stage by Tara, who started as his partner in magic and three years later became his wife.

"Tara comes from Zimbabwe, born and raised there her entire life. She flew across the world to try out for my show. Her talent blew me away, and I brought her into the show immediately.

"She plays a dark spirit in the mansion, and she represents the challenges we all face as we attempt to follow our dreams," Thomas says. "I share with the audience that we must sometimes put away the past to move forward. At one time I say, 'You need to learn to dance with your ghosts.' At that moment I present an effect you will see nowhere else. We dance in the air. It is the finest magic spectacle you will ever see. We dance in the air!"

Thomas promises there is nothing like his show, not just in Branson but in the world.

"The eternal appeal is that it is live," he says. " A gentleman came to me just this week and said, 'I've seen magic on television. However, what I just saw live is way beyond anything I saw on television.' My reply to him: 'I know! Isn't it amazing!'"

Print Headline: 'We Dance In The Air'