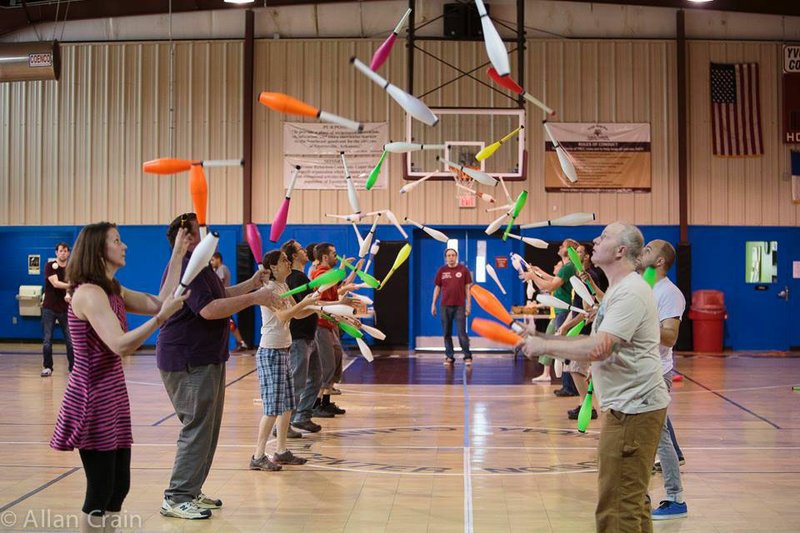 Photo by Allan Crain Northwest Arkansas Juggling Festival director Galen Harp says between 80 and 100 jugglers from all over the country will flood Eureka Springs for the event.

Galen Harp is passionate about juggling. Though he didn't officially discover juggling until he was an adult, the co-founder of the Institute of Jugglology placed second in the International Juggling Championships in 2012 and nabbed the top prize at the competition in 2014. Today, he helps bring his love of the art to the masses through the Northwest Arkansas Juggling Festival, which runs May 10-12 as part of the May Festival of the Arts in Eureka Springs.

"I was actually already a juggler, but I didn't know it," says Harp of his introduction to juggling, made through his father-in-law, Joel Henderson, who taught a drama and circus arts program at Fayetteville Public Schools' Agee-Lierly Life Preparation Services Center (ALLPS) for many years. "I worked in the restaurant industry and had already taught myself to do the tricks that a Japanese chef does. When I was a kid, I was always interested in the manipulation of objects. I think I took to it so quickly because I was already there: I didn't know I was preparing to be a juggler; I thought I was just playing with objects."

Harp says the juggling festival is aimed at both experienced jugglers and those who would like to learn more about the art.

"On May 10, from 5 p.m. until 9 p.m., we have what we call an open gym," he says. The open gym experience allows the 80 to 100 jugglers who will be attending the event to show their stuff while onlookers observe and, possibly, learn. "As a juggler, going to festivals is how I recharge my batteries and learn new tricks -- see cool stuff that inspires me. We're providing an event where [skills] can breathe and grow. The juggling community is so open. If you see someone doing something amazing, you can walk up and talk to them about it."

The morning of May 11 brings another open gym, followed by free classes for all skill levels. At 2 p.m. on May 11, juggling-based games begin. Harp says one of the most popular games is one called "Combat."

"Everyone starts juggling at the same time, and the goal is to stop people from juggling by any means possible," he says. "It's a real crowd pleaser."

The event crescendos with a Saturday night performance at the Eureka Springs Community Center that features performers "from all over the country," says Harp. "We'll have [Chicago-based World Champion juggler] Jared Janssen and about nine acts in all, with multiple world champions."

Tickets for the event are $5 for children under 10 and $10 for adults but -- as with the Saturday afternoon classes -- they are free for Eureka Springs residents through a grant from the Eureka Springs Arts Council.

It's obvious that, for Harp, juggling goes far beyond a hobby -- and he hopes events like this one will help introduce the art to a younger audience.

"I really wish someone had shown me how to juggle at age 11 or 12 instead of 26," he says. "So I'm driven to teach people how to juggle. If you've ever had to deal with a problem you can't find a solution for right away, juggling teaches you to work on those things.

"I'm also the director of the Youth Academy, and we advocate for juggling and circus arts to be used in physical education classes in school. We've succeeded in New Mexico; they've passed a state law [that allows circus arts to be taught in physical education classes]. We have mountains of evidence of the benefits. It gives kids that aren't interested in traditional sports something to focus on, and it's scalable for people with special needs."