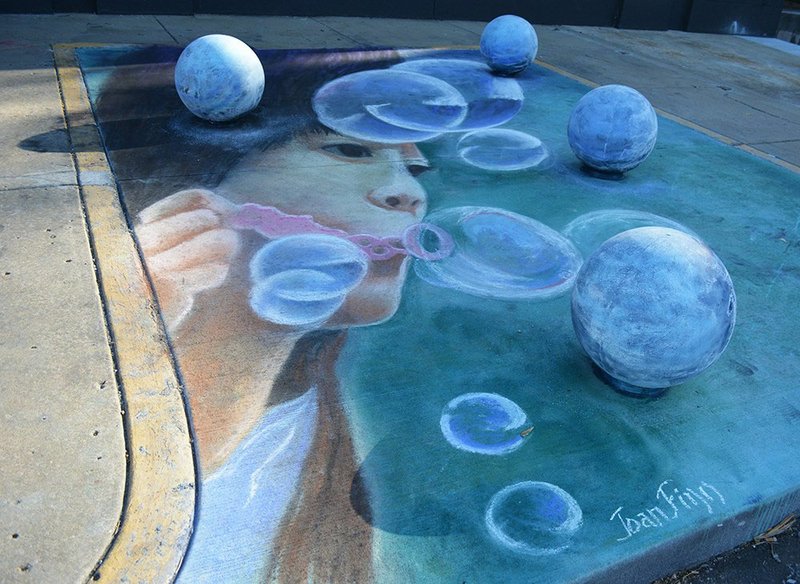 Courtesy Photo Artist Joan Finn will be returning to the Chalk Art Festival, scheduled for May 15-18 as part of the May Festival of the Arts in Eureka Springs. Sandy Royce Martin, chairwoman of the Eureka Springs Arts Council, says that, due to complications stemming from diabetes, Finn lost vision in her left eye in the late 1990s and credits street art for giving her the spirit to recover and continue pursuing her passion.

Sandy Royce Martin, chairwoman of the Eureka Springs Arts Council, says that adding the Chalk Art Festival -- running May 15-18 this year -- to the venerated May Festival of the Arts lineup was a matter of popular demand.

""We put out a kind of survey three years ago for our visitors," she says. "We walked around during various events and asked, 'What else would you like to see?' and street art came up several times."

May Festival of the Arts

Come to Basin Spring Park between 10 a.m. and 5 p.m. May 5 and take a whack at a giant pinata and dance to the beat of Papa Rap during the first Eureka Springs Cinco de Mayo Fest.

“Eureka Springs hits the big screen with a free showing of the feature-length movie ‘Antiquities,’” says Sandy Royce Martin. “The film stars Mary Steenburgen, Graham Gordy (‘True Detective’) and is set in the quaint and quirky town of Eureka Springs. Meet the producers, directors and actors after the screening at 7 p.m. May 15 in the historic City Auditorium.

Historic White Street is the working address of several local artists who will welcome the public into homes and studios to view their latest works. They will be joined by more than 40 guest artists from the Eureka Springs area, who will show weaving, watercolors, jewelry, oils, pottery, stained glass, and much more from 4 to 10 p.m.

Presented by the Carroll and Madison Public Library Foundation, Books in Bloom is in its 14th year at the Crescent Hotel, bringing together authors like Brooks Blevins, Jeffery Deaver, James Dean of “Pete the Cat” fame, Patsy Watkins and Zeek Taylor, noon-5 p.m.

Last year was the first year of the Chalk Art Festival, and Martin says it was an overwhelming success.

"[I think its success can be attributed to the fact that] it was so family oriented and such a huge photo opportunity, because it's so three dimensional," she says. "Craig Thomas did a Renaissance drawing last year, with a woman pouring wine out of a jug, and people loved posing with that. Another artist did a large hole with a bridge across it, and people were having fun with that. I think it's the interactivity along with the fact that it's not intimidating art at all."

Craig Thomas is a nationally known artist who has been creating street art for more than two decades. He will be returning to the festival again this year, along with several other well-known street artists, among them Joan Finn and Scott Kelly, says Martin.

"Craig also does workshops, if anyone wants to learn -- for artists and non-artists alike."

The steep terrain of Eureka Springs is a challenge for street artists, but Martin says the Arts Council solved that problem by securing permission to use a city lot at 22 S. Main St. as the canvas. And there are no worries should the weather be uncooperative.

"We are tenting the lot, so it won't stop us if it rains," promises Martin.