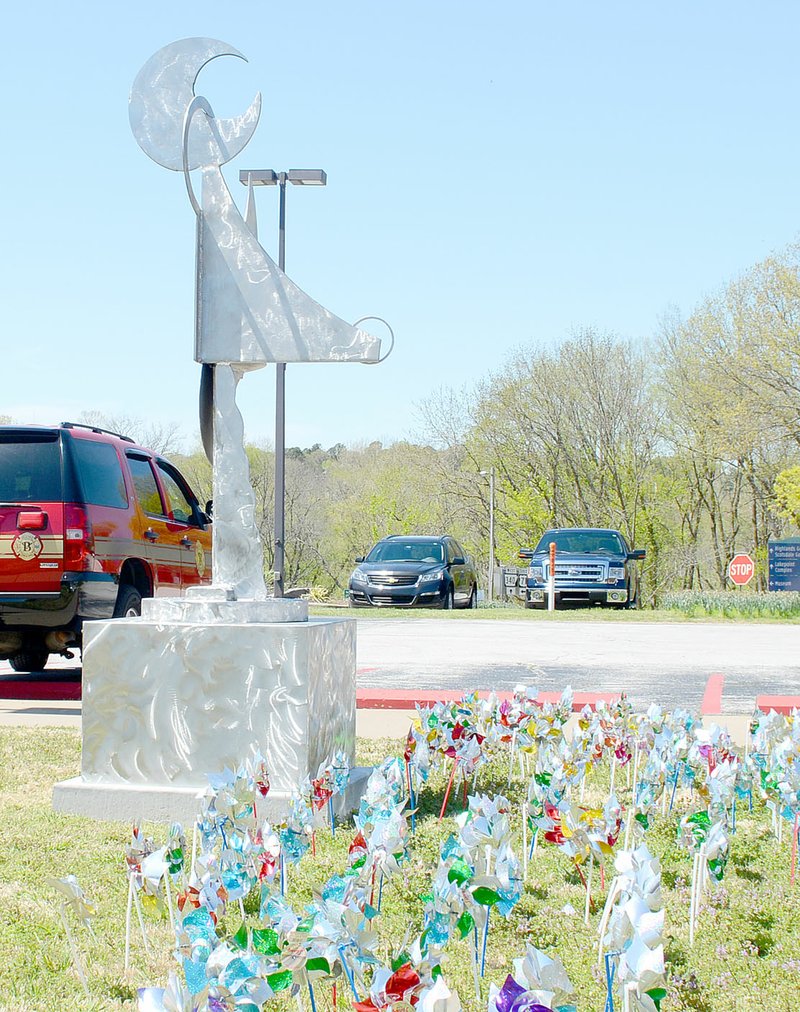 NWA Democrat-Gazette/Keith Bryant Marilyn Monroe, sculpted by St. Louis-based artist Larry Pogue, shimmers in the sunlight on a concrete pedestal in front of the Bella Vista police and fire departments. Pogue describes the piece as "what the metal told me to make."

"Marilyn Monroe" is perched outside the Bella Vista Police Department and Fire Station 1, just off U.S. 71 through Bella Vista.

The welded stainless steel sculpture was donated to the city by St. Louis-based artist Larry Pogue and installed last month.

He's also a former art instructor and served in the Navy.

Pogue has donated several pieces to hospitals in the St. Louis area and previously said he wants to share his art with as many people as he can.

"Marilyn Monroe" is an abstract piece with several nods to its namesake.

The ring on the left-hand side of the sculpture is a nod to Monroe's four marriages, Pogue explains, and the interlocking moon and sun crowning it represent the late actress' habit of reading her horoscope before getting out of bed.

The up-turned curve on the right-hand side is a nod to her hairstyle, he adds.

Terry Wilson with the Bella Vista Arts Council says that the sculpture, which is 107 inches tall and weighs 532 pounds, is a highly appreciated donation.

"It was his generosity that made this happen," Wilson says.

Pogue agreed to donate the piece near the end of last year, and the city accepted it early this year. The conversation started back in July of 2018, he says.

Pogue has art all over the United States, along with some pieces in Switzerland and Scotland, Wilson says, and having a piece from an internationally known artist here in Bella Vista means a lot.

The city sent a truck to go pick up the sculpture, Wilson explains, and a concrete pedestal was laid outside city hall. While the pedestal had to cure for multiple weeks, he says, the actual installation only took about an hour.

Verbiage was just approved for a plaque to be placed on the concrete pad in front of the sculpture, he says.

It's the first piece of art the city has acquired, he adds, and he's pleased with it.

"I hope that it will make the community a little bit more interested in art. I hope it makes them more aware of what's out there," he says.