Lawmakers thought they had found a way to rein in executive pay at the Federal National Mortgage Association (Fannie Mae) and the Federal Home Loan Mortgage Corp. (Freddie Mac), after capping their CEOs' compensation at $600,000 per year.

So quick-thinking officials at the Government Sponsored Enterprises came up with a new position -- president -- that hadn't existed when the caps were mandated by Congress.

The move was approved by the Federal Housing Finance Agency, which oversees the two housing finance companies.

Some lawmakers weren't amused by move, which came less than a decade after a government bailout of Fannie Mae and Freddie Mac.

He recently wrote to the agency's new director, Mark Calabria, to complain about the practice, which was implemented by Baracl Obama-era appointees.

"It is stunning that GSE and FHFA leadership would blatantly skirt this congressionally mandated cap after having received nearly $200 billion in bailouts since going under government conservatorship in 2008," he wrote. "I believe the first obligation of FHFA should be repaying the taxpayers, not violating congressional intent by allowing more than $8 million in compensation for four people doing the same jobs that two people are authorized to undertake for $1.2 million."

The late U.S. Sen. William Proxmire, D-Wis., created the Golden Fleece Award, using it to highlight government spending that he considered wasteful. After Hill's election to Congress in 2014, he resurrected the award.

The annual reception thrown by Electric Cooperatives of Arkansas drew a crowd Tuesday.

The event occupied the entire top floor of the W Hotel, which offers postcard-perfect views of the White House, the Washington Monument and other landmarks.

Roughly 175 people made the trip from Arkansas, according to Electric Cooperatives of Arkansas manager of corporate communications Rob Roedel.

Lawmakers, lobbyists and staff members dined on chicken and waffles, macaroni and cheese and poke bowls.

The Republican lawmaker from Jonesboro sings and plays guitar.

"Rick Crawford is probably one of the best musicians in Congress, and we're glad to have him at our event each year," Roedel said.

Last week's reception coincided with a meeting of electric cooperative officials from across the country.

The event is "a long tradition," Roedel said.

It's the Baylor University graduate's second stint on Capitol Hill. She had a similar internship five years ago, working for then-U.S. Rep. Tom Cotton, she said.

Asked what she likes most about Washington, she said, "Being in the middle of everything. Getting to experience it firsthand. It's really just a unique experience that you can't get anywhere else."

While welcoming Teed, the office is also saying goodbye to intern Jeremy Ward, a Pine Bluff native who just completed his freshman year at American University.

Ward, 19, stopped by the 4th District congressman's office last year to say hello shortly after arriving for classes. A staff member asked if he'd be interested in an internship, and he quickly applied.

The year was eventful, he said. "I got to meet other members of Congress, work on bills, go to meetings and things. I got to really have a good experience on the Hill all around."

Planning to visit the nation's capital? Know something happening in Washington, D.C.? Please contact Frank Lockwood at (202) 662-7690 or [email protected] Want the latest from the Arkansas Democrat-Gazette's Washington bureau? It's available on Twitter, @LockwoodFrank. 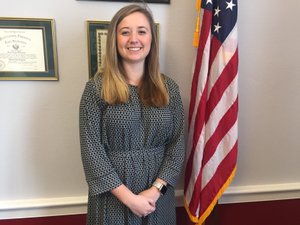 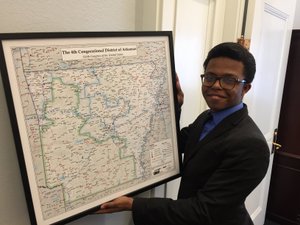