Bella Vista POA to take over cleanup of underground fire 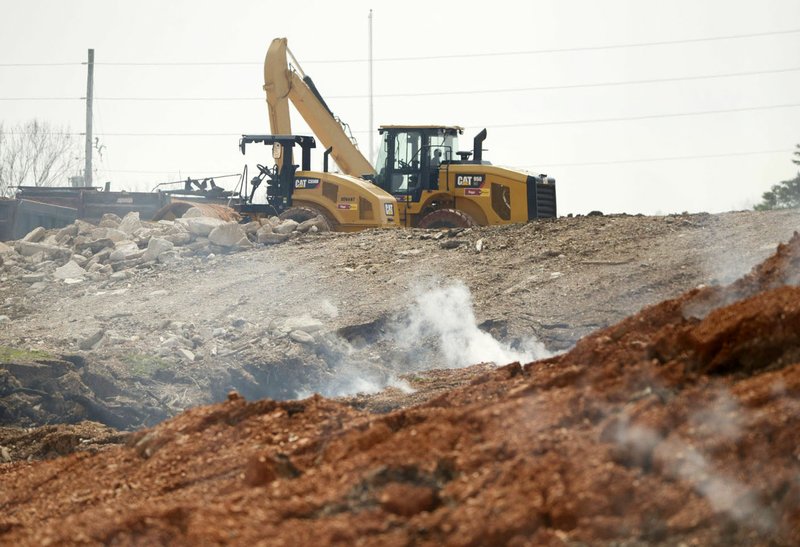 NWA Democrat-Gazette/CHARLIE KAIJO Crew members work Friday at the site of the stump dump in Bella Vista. Access road construction and the other on-site work is projected to take three to four weeks. The road will allow heavy equipment access to the site for excavation and other activities, Davis said.

BELLA VISTA — The Property Owners Association will pay for extinguishing the underground fire and any removal action at the Trafalgar Road site, the Arkansas Department of Environmental Quality announced today.

Environmental Quality will maintain inspection duties and provide oversight, according to a news release.

The state agency notified the POA in Januay it considered the association a potential responsible party with an obligation to contribute to the management and suppression of the fire and remediation of the site, the release stated.

The General Assembly passed a $20 million appropriation in the 2019 legislative session to facilitate the extinguishing of the fire and subsequent cleanup of the site. With the POA assuming responsibility of the site from the state, the appropriation may no longer be necessary, which will result in a reduced cost to the state, the release stated.

The cost to extinguish the fire and clean the site could be between $21 million and $39 million, according to state estimates.

An Arkansas Department of Environmental Quality official said on April 18 that an end to the underground fire was still months away.

Stuart Spencer, associate director of air quality with the department, gave a 30-minute slide presentation at Riordan Hall on April 18 to show the agency’s plan for containing the fire and then excavating the site.

Judson has said the association operated the dump on leased land from December 2003 to Dec. 31, 2016, when it was covered with soil.

Nobody monitored the site the last few years it was open, but staff members would remove trash when possible, Judson has said. The property is now owned by Brown’s Tree Care.