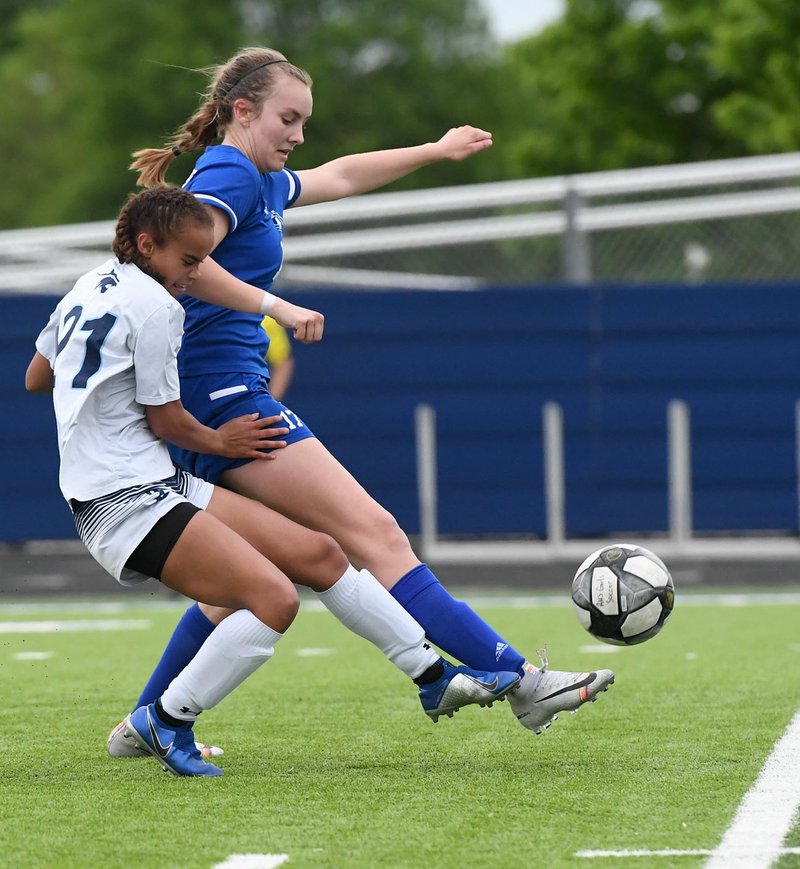 ROGERS -- Another shootout, another victory for Rogers High.

Rogers (18-2, 12-1) remains in first place in the 6A-West and the Lady Mounties can claim the league championship with a victory tonight against rival Rogers Heritage on Senior Night at Whitey Smith Stadium.

Rogers will then prepare to defend its state championship in the Class 6A state tournament that begins May 9 in Conway.

Rogers had several chances in regulation to score but failed. The game went to a second phase and Har-Ber went ahead 1-0 on penalty kicks when Estrada Giselle scored. Rogers answered with four straight goals while junior goalkeeper Mac Brace stopped two shots by Har-Ber, once when she went to her knees and the other when she used her hands to bat away an attempt.

Rogers then rushed the field after Hattie Hinkle scored to give the Lady Mounties a 4-2 advantage.

"We're really comfortable with this situation if it comes to that," said Rogers coach Aaron Crouch, referring to penalty kicks. "We seem to handle it pretty well."

Rogers controlled the ball for much of the game and had three early chances to score but shot wide on goal each time. Rogers' best chance in the first half came with 1 minute, 48 seconds left before halftime when Jourdan Badely shot accurately with her left foot in front of the goal but her attempt was saved by Kanono Estera.

"We definitely had plenty of chances," Crouch said. "Especially in the first half, we had lots of opportunities to put the game away before we even got to halftime."

Har-Ber (11-9-1, 7-6) appeared to score midway through the first half but the goal was nullified by an offsides call.

Rogers must now turn around and play back-to-back games after Tuesday's match with Har-Ber was postponed by severe weather.

"Recovery is going to be the key," Crouch said. "We're going to start the recovery process, get our muscles healed up and get some of the soreness out, and get ready for (tonight)."

Brylie Parker gave the Lady Goblins (19-3-1) in the opening minute with a goal off a Kaitlyn Pratt corner kick, then Kenzie Parker added her two goals for a 3-0 halftime lead. Brynn Oleson scored Harrison's only second-half goal.

Harrison advances to today's semifinal match against Berryville at Berryville.

Tyler Ann Reash had a hat trick and Angelina Diaz added two goals to lead the Lady Tigers to the big win.

Nelson Rivas snapped a 1-1 tie with a little more than a minute left in the second half to give the Mounties the win.

Francisco Jimenez, who gave Rogers a 1-0 lead in the first half, picked up the assist on Rivas' game-winner.

Har-Ber's Kevin Cubias tied it 1-1 with a goal at around the 60-minute mark.

Corbin Simpson scored a pair of first-half goals as Harrison advanced in the 4A-West Conference tournament.

Simpson scored on an assist from Hunter Holtby 2 minutes into the match, then scored again off an assist from Kaden Jones. Spencer Bailey had the other goal in the final minute of the first half off another Jones assist.

Harrison (15-4-1) advances to today's semifinal match in Berryville against either Berryville or Clarksville.

Cassie Gonzale went 3-for-5 with a double, drove in two runs and scored twice to lead the Lady Mounties to the 6A-West win.

Madison Heinle pitched a complete game, allowing a run on three hits. She struck out 13 and walked two. Heinle also was one of three Lady Mounties to get two hits. Journee Zito also drove in two runs for Rogers.

The Lady War Eagles scored five runs in the bottom of the fourth inning to wipe out an early deficit and earn the 6A-West Conference win.

Fayetteville scored two in the top of the first and led 4-2 after three innings, but Heritage used the big inning to rally for the win.

Allyson Fultz doubled and drove in two runs and also picked up the win in the circle. She came on in the first inning with nobody out and restored order.

Fultz allowed three runs on nine hits over seven innings of work. She did not strike out a batter or walk a batter. Anna Lee also drove in two runs for the Lady War Eagles.

Shalin Charles went 4-for-4 with a home run, two doubles and a triple and drove in two runs for Fayetteville.

Hallie Wacaser had a home run and drove in four runs as West defeated Van Buren in a 6A-West game that was moved Wednesday to the Wolverine Athletic Complex.

Wacaser hit a solo home run to give West (12-1) a 3-1 lead in the third, then the Lady Wolverines erupted for eight runs in the fourth, including a two-run double by Wacaser.

The Wildcats scored two runs in the top of the second inning aided by a Fayetteville error and Har-Ber pitchers took care of the rest.

Carter Carlton's RBI-single gave Har-Ber the 2-0 lead. Landon McAllister picked up the win, allowing a run on three hits over 6.1 innings of work. He struck out six and walked four. Jameson Clardy picked up the save, getting the final two outs.

Carter and Charlie Acuff had two hits each for the Wildcats. Beau Stuckey went 3-for-4 and scored a run for Fayetteville.

Luke Davenport was the hard-luck loser, allowing two runs (both earned) on six hits over seven innings. He struck out seven and did not walk a batter.

Landrey Wilkerson pitched a complete game and drove in a run to help the Pointers pick up the victory.

Van Buren jumped to a 3-0 lead in the second inning and that was plenty for Wilkerson. He allowed just three hits and a run over seven innings. He struck out 12 and walked two.

Tanner Callahan went 3-for-4 for Van Buren, while Trevor Johnson hit a two-run homer in the first inning. McKane Woods singled and drove in Springdale's lone run in the bottom of the third to get the Red Bulldogs within 3-1.

The Wolverines scored four runs in the bottom of the third inning and made it stand up for the win, despite getting only three hits in the game.

Bentonville West combined three walks, two singles and what turned out to be a huge Bentonville error to take a 4-2 lead.

Maddox Thornton had an RBI-single and Joey Aden drew a bases-loaded walk in the inning. Landon Grigg also went 2-for-3 and scored a run for the Wolverines.

Dylan Carter picked up the win, allowing three runs on just one hit over four innings. He struck out eight and walked eight. Hunter Mayes got the save, pitching three scoreless innings while striking out four and walking none. 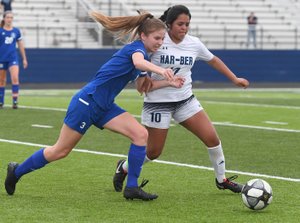 NWA Democrat-Gazette/J.T. WAMPLER Rogers' Samantha Todd tries to get the ball from Springdale Har-Ber's Giselle Estrada Wednesday May 1, 2019. Rogers won 4-2 in a shoot-out after tying 0-0 in regulation time.