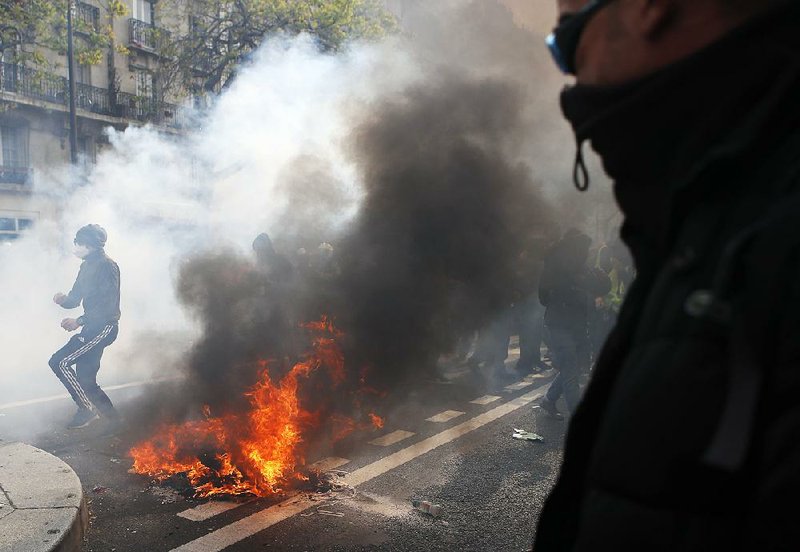 A demonstrator runs past burning garbage Wednesday in Paris during a May Day labor march that was disrupted by anarchists and yellow vest protesters. Police responded with flash grenades, rubber balls and tear gas, and reported 330 arrests.

PARIS -- Clusters of anarchists and yellow-vest protesters disrupted a May Day march in Paris by setting fires and antagonizing riot police squads at the beginning and end, punctuating the route walked peacefully by tens of thousands of people with bursts of tear gas.

Officers fired flash grenades and rubber balls along with the tear gas as troublemakers wearing black masks and hoods confronted them in the street and pelted them with stones and other objects.

The confrontations broke out near the start of the main labor march near Montparnasse train station and resumed when police tried to disperse stragglers at the finish, near the Place d'Italie in southeast Paris.

The French Interior Ministry said 24 protesters and 14 police officers were injured. The ministry said 28,000 people marched in Paris and more than 164,000 in May Day rallies across the country.

A private company hired by a group of French news outlets, Occurrence, counted 40,000 protesters in Paris, while the CGT union said there were 80,000 participants.

More than 7,400 police officers from across France were deployed in Paris because of the May Day events. The Paris Police Department said there were 330 arrests. Officers also performed more than 15,300 "preventive searches" of bags.

The streets of the French capital calmed down Wednesday evening as marchers slowly left the area amid a still-heavy presence of police.

French authorities had warned that "radical activists" might disrupt the Paris demonstration Wednesday as in previous yellow vest protests and on May Day during the past two years.

Associated Press reporters saw groups of the masked and hooded protesters causing damage and then merging with the much larger number of peaceful May Day marchers.

Some vandalized a parked van, kicking the vehicle and breaking its windows. Others set small fires at trash cans and a shed at a construction site.

At least two men with head wounds were helped away by paramedics and firefighters assisted a woman in a wheelchair. Some police officers also fell on the ground.

Paris police said one police officer was taken to a hospital with a head injury.

The Russian Foreign Ministry alleged that French police used batons on the head and shoulder of a correspondent for state news agency RIA-Novosti, Viktoria Ivanova.

"We consider the use of violence against journalists in the exercise of their professional duties to be unacceptable," the ministry said in a statement Wednesday.

Paris police and the French government did not immediately respond to the statement from Moscow.

While some of the people clashing with police wore the signature yellow vests of a French anti-government movement, the peaceful march also had participants in yellow vests as well as waving labor union flags.

Yellow-vest supporters joined the traditional May Day march organized by labor unions to show solidarity in rejecting President Emmanuel Macron's economic policies, which some see as favoring the wealthy and big business.

Macron last week tried to address the complaints of the yellow-vest movement by announcing tax cuts for middle-class workers, a pension increase and election rules to make it easier to call public referendums.

Philippe Martinez, secretary general of the CGT union, temporarily left the march for security reasons during the scuffles between the anarchist protesters and police.

After rejoining the marching throngs, he stressed that yellow vest and union activists "are marching together in all French cities."

"That's a protest of workers who tell the government and the president of the republic: 'Change your policies,'" Martinez said of the support from the movement that started in November.

Information for this article was contributed by Jeff Schaeffer of The Associated Press.