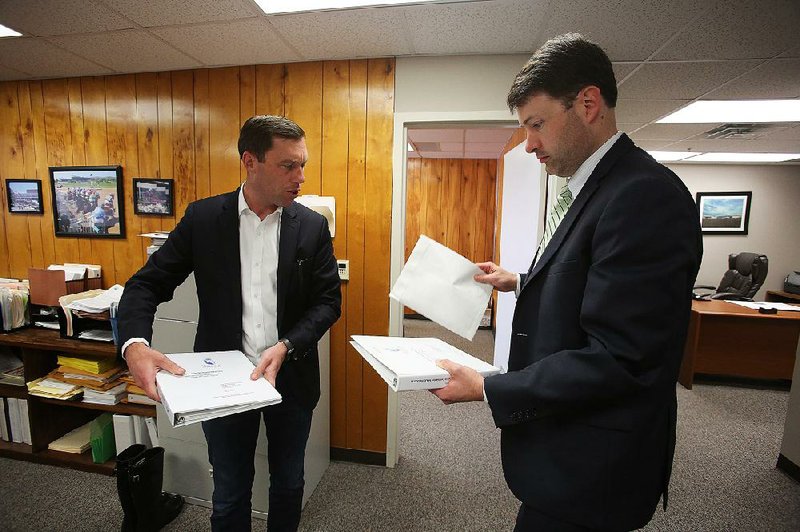 Quapaw Nation attorneys Nate Steel (left) and Alex Gray give a final look to the tribe’s application for a casino license Wednesday at the Arkansas Racing Commission offices in Little Rock. - Photo by Thomas Metthe

Less than an hour before the close of business Wednesday, attorneys for the Quapaw Nation carried a file box packed with white three-ring binders into the state Racing Commission's office and handed over a $250,000 check, marking the first application for one of the state's two new casino licenses.

"We wanted to show the commission we wouldn't be dragging our feet," said Nate Steel, attorney for the Quapaw Nation, when asked why it was important to submit the application on opening day for the state to accept applications for the licenses.

"There's been a lot of discussion about how long it's going to take for a new casino resort to get up and operating and generating tax revenue, which is very important," Steel continued. "We wanted to show all interested parties that we would be moving at ultimate speed."

Arkansas voters in November passed constitutional Amendment 100, which allows full-fledged casino licenses to be awarded to Oaklawn Racing Casino Resort and Southland Gaming and Racing, as well as for one each in Pope and Jefferson counties, which now have no legal gambling operations.

The casino license application period for those vying for the Pope and Jefferson counties licenses began Wednesday and will continue through May 30.

Alex Gray -- the attorney for the Quapaw Nation who helped draft Amendment 100 for the Driving Arkansas Forward ballot committee -- grinned broadly in Little Rock as he handed over the application fee check to Nikki Langston, the commission's business operations specialist.

Quapaw Nation officials announced several months ago that they want to build the Saracen Casino Resort, a $240 million casino project near The Pines mall in Pine Bluff.

"I'm super excited. It's been a long run and we're very excited, not only for us, the Quapaw Nation, but for the citizens of Jefferson County," said Quapaw Nation Chairman John Berrey. "We're excited to move through the process and answer any questions the Racing Commission may have. We're looking forward to getting things done, getting tax revenue generated and jobs going, and making Jefferson County a better place for people to live."

Steel said that while it was only the first day of filing, he doesn't foresee any other casino interests vying for the Jefferson County license.

"From the scale that Downstream is looking at investing in Jefferson County, it would be very difficult for other qualified applicants to match," said Steel, referring to the tribe's business entity, the Downstream Development Authority. "This goes beyond just dollars and cents. For Downstream and the Quapaw tribe this is about investment in the homeland."

The local official endorsements are required under Amendment 100.

The prospects for a Pope County casino license are in doubt, however. Voters in that county overwhelmingly rejected Amendment 100 at the polls and approved an ordinance that any endorsement by local officials would required voter approval.

Officials of one contender, Gulfside Casino Partnership, have said they will submit an application with endorsements they received from previous Pope County and Russellville officials. Those officials, just before leaving office at the end of December, issued letters of support for Gulfside.

But the state Racing Commission ruled earlier this year that the endorsements can come only from officials in office at the time the application is submitted.

Current Pope County and Russellville officials said they will not throw their support behind a casino proposal unless it is the will of their constituents.

Messages left for Gulfside's attorney, Casey Castleberry, to ask when the company planned to submit its application were not returned as of late Wednesday.

Bill Warner, chief executive officer of Warner Gaming, a third company interested in applying for a license in Pope County, would not say in an interview Wednesday when the company would submit an application. However, he said it would be submitted without local government endorsements.

"We've had meetings with them, and they've been pretty clear they're not going to issue a letter of support. So, at this point in time, I think the best thing to do is to continue to move forward in the application process," Warner said. "Hopefully, at some point in time, we'll get the opportunity to describe why this is going to be a great project."

The Cherokee Nation, which operates 10 casinos in Oklahoma, also has expressed interest in applying for a casino license in Pope County. Amanda Clinton, spokesman for the Cherokee Nation, declined to comment when contacted Wednesday.

Any applicant that is not accepted will receive only half of the $250,000 application fee back, according to the licensing rules.

Scott Hardin, spokesman for the state Department of Finance and Administration, which oversees the Racing Commission, said the commission was "pleased to formally open the application process."

"Following submission, applications are shared with each member of the Racing Commission, providing Commissioners sufficient time for thorough review," Hardin said in an email. "We anticipate applicants will be asked to attend a scheduled June 13 meeting of the Commission in order to speak to Commissioners and answer questions. Depending on the number of applicants, a license could be approved as soon as the June 13 meeting."

Berrey said that as soon as a license is awarded, crews will begin work "within 10 minutes."

"It will take about 10 to 11 months to get it framed in, then we'll open the casino and a couple of restaurants," Berrey said. "Then we'll finish the hotel and convention center. It will probably be 16-18 months total time. We'll have the ball rolling and people working. We'll be generating taxes for the state of Arkansas, and we'll be bringing people to Jefferson County for tourism."