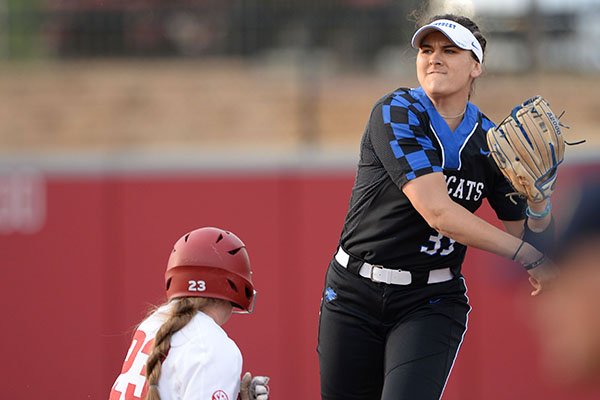 Unfortunately for the University of Arkansas, Autumn Humes was on the mound for the No. 18 Kentucky Wildcats, who handed the No. 13 Razorbacks (24-11, 5-6 SEC) its worst defeat of the season.

Humes, a Bald Knob product, pitched all 5 innings, allowing a pair of runs in the 16-2 Kentucky run-rule victory. She allowed 5 hits and walked 3 while striking out 4. She spent her freshman year at Harding University in Searcy before transferring to Kentucky.

"Kentucky is an incredible offensive team, and if you give them any momentum or leave any plays out there that need to be made, they are just going to capitalize on it," Arkansas Coach Courtney Deifel said. "We could just never recover."

Arkansas starter Mary Haff hit Katie Reed with a pitch, then walked Lauren Johnson to load the bases with two outs. A passed ball allowed two runs to score, and matters were complicated when Haff was injured on a play at the plate.

With fellow starter Autumn Storms coming off a seven-inning gem in Friday's 1-0 victory, Deifel went with transfer junior Lauren Graves to take over pitching duties. Johnson then scored on a Razorback error to make it 3-0.

Senior Ashley Diaz finally got Arkansas on the board with a two-out single in the bottom of the second, scoring Keely Edwards and Nicole Duncan to trim the lead to 10-2.

After tacking on another run in the third, Kentucky scored five more in the fourth. Senior Abbey Cheek hit her second home run of the game with a three-run shot to extend the lead to 14.

"The important thing for our girls to remember is it's still 1-1 in the series, so if we give this game more weight than that, then we are going to have trouble responding [on Sunday]," Deifel said. "In a game like this, we need to learn from it, but we need them to turn the page. We need to start fresh in Game 3."

The 16 runs allowed were the most surrender by the Razorbacks since allowing 23 to Auburn in April 2016.

The rubber match of the series will start at 1 p.m. today at Bogle Park.