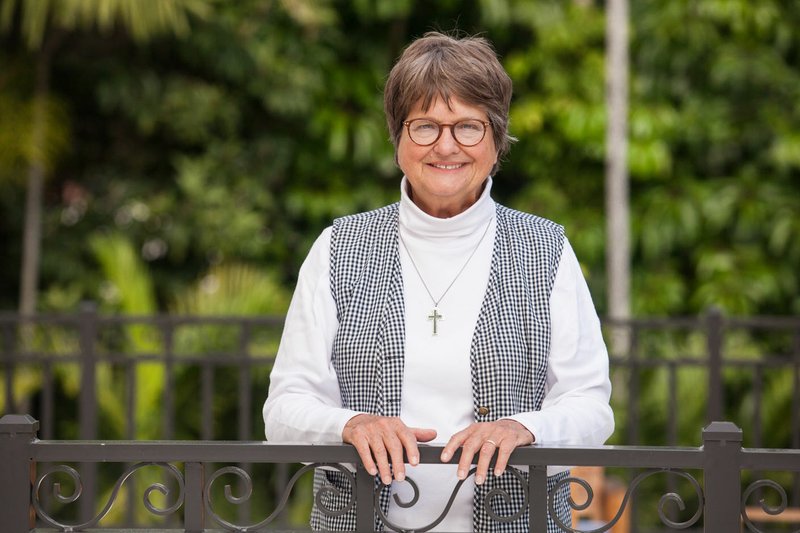 Special to the Democrat-Gazette/SCOTT LANGLEY Sister Helen Prejean, a member of the Congregation of the Sisters of St. Joseph, will speak on her opposition to the death penalty April 4 in Little Rock. She says she wants to "wake up ordinary people to why the death penalty should be an issue of concern to us average citizens."

Witnessing the execution of death-row inmate Elmo Patrick Sonnier in 1984 sparked Sister Helen Prejean's mission of advocacy against the death penalty, and her experience as Sonnier's spiritual adviser would be chronicled in her 1993 best-selling book, Dead Man Walking.

Two years later, Dead Man Walking was made into an Academy Award-winning film with the same name and was later adapted into an opera. Her latest book, River of Fire, will be released in August. A prequel to Dead Man Walking, Prejean says it tells the story of her "awakening" to faith while growing up in Louisiana.

Awakening is also how Prejean describes the goal of her forthcoming talk and book signing at Little Rock's Saint Mark's Episcopal Church on April 4. She says she wants to "wake up ordinary people to why the death penalty should be an issue of concern to us average citizens."

The Death Penalty Information Center's annual survey found that there were 25 executions carried out last year, marking the fourth consecutive year that fewer than 30 were conducted in the United States.

"We see a decline in the practice of the death penalty; and where it is happening it's because some prosecutors or governors have staked their political career, or they get political points for pushing for the death penalty," Prejean says. "That's the reason right there why we can essentially abolish [the death penalty], because it's arbitrary and capricious in its application."

Race, socioeconomic status and one's location in the United States also affect the use of the death penalty. Black prisoners outnumber white prisoners on death row by a substantial margin, Prejean says, and the poor don't have the resources to hire attorneys and "fight the prosecutor step for step."

Arkansas was the focus of international attention in April 2017 when the state set out to execute eight men in 11 days because the state's supply of midazolam, an anti-anxiety drug that wasn't originally intended to have a sedating effect, was expiring at the end of that month. Midazolam is one part of a three-drug combination used by the state for executions.

Four of the men were executed, and four received court stays. Prejean publicly opposed the 2017 executions on Twitter.

Prejean's talk comes just weeks after a bill cleared the Arkansas Senate that would exempt records concerning the drugs used in executions from the Freedom of Information Act. Prejean says the lack of disclosure the bill is set to condone would make the secrecy around executions "even more profound."

"One of the things I've discovered ... is that because people are not close to what it actually means for a state to execute a citizen ... then they're not horrified by it, and they don't think about it very much because it doesn't touch them," she says.

Prejean plans to take the audience at Saint Mark's through what it means for the state to execute people, and explore what that execution means for victims' families. She will do that by offering facts and figures, but also through recounting her experiences and those of family members she has witnessed.

"I've found you can give all the statistics in the world to people, but it doesn't change minds and hearts," Prejean says. "You got to talk about real people."

The Rev. Patricia Matthews, an assistant rector at Saint Mark's, noted that the Episcopal Church has a longtime stance against the death penalty. The church first took its stand in 1958 and reaffirmed its stance in 2015.

"While we have compassion for victims of all crimes, we also believe that no one's outside of God's love," Matthews says. "We know the system is broken and biased [against nonwhites] ... and that it's a theological thing to kill someone, because that suggests that there's no chance for redemption in this world."

Episcopalians in Arkansas have called for a moratorium on the death penalty in the state in the past, and last year Saint Mark's hosted a performance of death-row inmates' stories through the Northwest Arkansas-based Prison Story Project. Art created by death-row inmates will be on display at Prejean's talk, and the Arkansas Coalition to Abolish the Death Penalty will make literature available at the event.

Discipleship and Evangelism coordinator Kyran Pittman of Saint Mark's recalled seeing Prejean speak at the University of Arkansas at Little Rock 20 years ago and says that while the issue of the death penalty was ongoing, the Catholic nun has a gift for addressing audiences with warmth and substance.

"[Prejean is] very ardent and passionate in her stance against the death penalty," Pittman says. "What I remember about hearing her speak was her profound respect for the families of victims, and her very solid reasoning behind why she feels the state has no business administering capital punishment. It's not simply an emotional argument she makes."