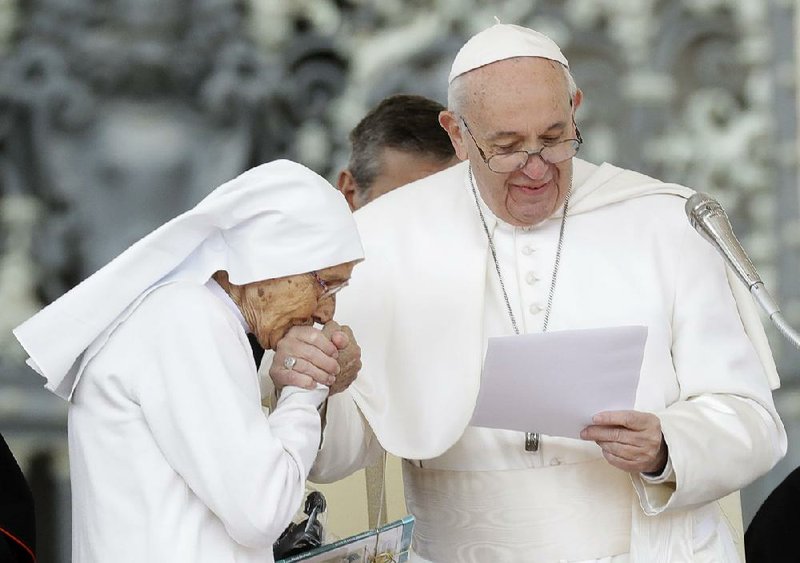 Sister Maria Concetta Esu, 85, kisses the hand of Pope Francis as he presents her with a Pro Ecclesia et Pontifice award during his weekly general audience, in St. Peter’s Square, at the Vatican on Wednesday.

Some called it "disturbing" -- while others view it as an act of "demystifying" the papacy -- but every member of the royal court of Catholic Twitter seems to have an opinion on the video of Pope Francis expressing visceral annoyance at Catholics seeking to kiss his ring.

The video, filmed during the pope's day trip to Loreto, Italy, on Monday, first started making rounds in traditional Catholic circles, showing a smiling pope pulling back his hand during a parade of Catholics seeking to kiss his ring.

Two days later the pope allowed nuns and priests to kiss his hand during a general audience, after the video drew disapproval from some of the pope's conservative critics.

The traditional act of kissing the ring -- which in the Catholic tradition is worn by bishops, cardinals and the pope -- has historically symbolized respect for the office. When footage surfaced of Francis steering Catholics away from it, the right-wing Catholic website Lifesite called it "disturbing."

Others, however, responded that Francis' actions reflect a man who has garnered a reputation as the pope of the people, seeking to institute a more humble approach to the way in which Catholics engage the papal office.

In his 1996 book The Church Visible: The Ceremonial Life and Protocol of the Roman Catholic Church, James-Charles Noonan Jr. wrote that "for centuries, the Church has granted an indulgence to Catholics who reverence the ring of the pope, cardinals, and other prelates."

Indulgences are granted for specific acts of piety wherein the Church grants remission of sin and have long been a common practice, yet as Noonan observes, when it comes to ring kissing, in most Western nations, prelates have long discouraged the practice.

Medieval church history scholar Christopher Bellitto, a professor at Kean University, said the ancient tradition of kissing the pope's ring is not part of any formal protocol while greeting the pope, but one synonymous with patterns of behavior for how one would greet kings, queens and emperors.

"When one greeted Ramses or Nebuchadnezzar, I'm sure it was common practice to bow and kiss one's ring."

Now, says Bellitto, "it's a leftover that is best left over."

"This isn't as much of a Francis story, as much as a story about the modern papacy," he added.

John Allen, a veteran Vatican journalist and editor of the online Catholic news site Crux, concurred, saying Francis' actions Monday are one further move in a trend that has continued since Pope John XXIII to "dial down the tradition of subservience," which has traditionally marked the papacy over the centuries.

Francis' reaction, he believes, is one further step to demystify one of the world's most secretive institutions, and after the Second Vatican Council (1962-65), popes have made gradual efforts to bring the office into the modern era.

In 1964, Pope Paul VI sent shock waves around Rome when he shipped off his bejeweled papal tiara for a charity tour around the United States to benefit Catholic Relief Services, making him the last pontiff to don the crown.

Pope John Paul I's brief 33-day papacy in 1978 changed the course of papal liturgy when he eschewed the papal coronation ceremony for a Mass of inauguration. Pope John Paul II, who would jet around the world visiting 129 countries, abandoned the portable papal throne for the popemobile, allowing easier access to the masses that had come out to greet him.

Even Pope Benedict XVI, known for his fondness for liturgical vestments, removed the image of the tiara from the papal coat of arms -- and like Francis, shied away from allowing guests to kiss his papal ring.

For Allen, the lesson from Monday is that the Vatican's master of ceremonies for papal events should reconsider how it communicates with those attending a papal audience and explain to them that Francis would prefer for his guests not to kiss the papal ring.

Papal biographer Austen Ivereigh said Monday's gestures were nothing new for Francis and merely a further effort to rid the papacy of its "monarchal encrustations" and to strip away elements of courtly rule that continue to be a holdover from a bygone era.

"He's not trying to steer people away from showing respect to the papal office," Ivereigh said. "For him, it's about wanting to have an encounter, not an act of submission."

Bellitto said the irony of the video controversy is that it's being fueled by traditionalist Catholics who "don't like the pope but still want to turn him into a Renaissance prince."

Meanwhile, Marie Collins, an Irish survivor of sexual abuse who was a member of the pope's Commission for the Protection of Minors, took to Twitter to observe that the video fails to show "the previous 15 minutes when he was having his hand kissed quite normally."

Collins said that Francis only began to resist the ring kissing after a particularly aggressive greeter had grabbed his hand in a rough manner.

"Elderly people bruise easily, it is possible his hand was hurt," she wrote. "The full video puts this 'pulling away' into context."

Others coming to his defense noted that he still had to greet sick people and lead a prayer during his visit.

On Wednesday, the pope allowed nuns and priests to kiss his papal ring during his weekly audience in St. Peter's Square.

One of them was Sister Maria Concetta Esu, an 85-year-old nun and obstetrician who has delivered some 3,000 babies during more than 60 years of missionary work in the Central African Republic.

With Esu at his side gently helping the pontiff as his papers blew in the wind, Pope Francis recalled meeting her in Bangui in 2015 after she arrived in a canoe.

"This is a sign of our affection, and thanks for all the work you have done among our African sisters and brothers in the service of life, of children, of women and of families," Francis said, presenting the nun with a medal. She then bowed and kissed his hand.

Among those commenting on Francis' actions was Archbishop Mark Coleridge of Brisbane, who tweeted: "She kissed his ring!"

Vatican spokesman Alessandro Gisotti said Thursday that Francis was concerned about hygiene when he began pulling his hand away on Monday to discourage people from kissing his ring.

"The Holy Father told me that the motivation was very simple: hygiene," Gisotti told reporters. "He wants to avoid the risk of contagion for the people, not for him ... You all know that he has a great joy in meeting and embracing people, and being embraced by them."

Each pope picks his own ring, which is destroyed at the end of his papacy, a formality meant to symbolize the end of his reign and to prevent forgeries. The papal Fisherman's Ring was named for the apostle Peter, who was a fisherman and the first pope.

Information for this article was contributed by Vanessa Gera and Nicole Winfield of The Associated Press.