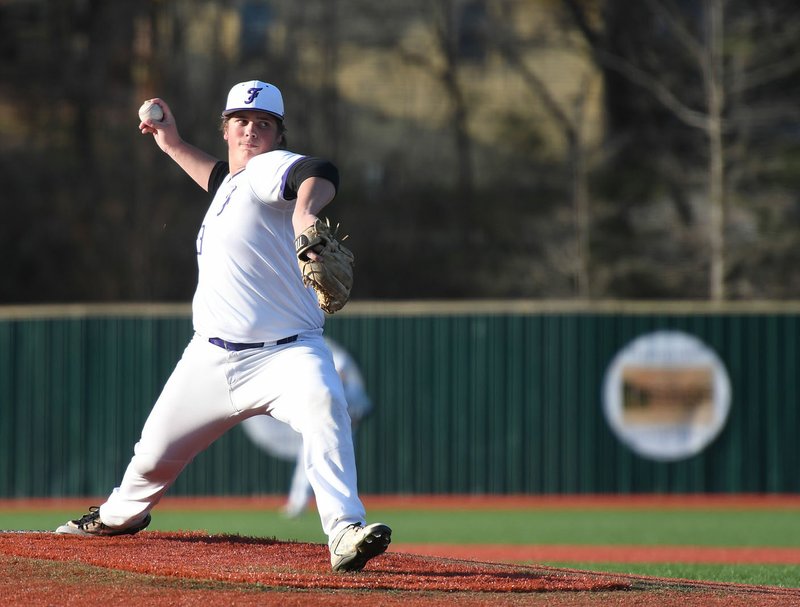 Fayetteville grabbed a five-run lead after two innings and defeated Rogers High 5-1 in 6A-West Conference action at Bulldog Stadium. Harris Wales hit a home run to back Luke Davenport, who went seven innings and allowed one run on four hits.

It was an overall solid performance by Fayetteville (7-5, 2-1), which lost three of four games while competing in the Coach Bob Invitational at Glendale, Ariz., last week. Three of Fayetteville's six hits went for extra bases and Josh Hart saved at least two runs with a diving catch toward the gap in center field in the second inning.

"We didn't play great defense out there (Arizona) and that cost us a few games," Fayetteville coach Scott Gallagher said. "That was a great job by Josh in center field to go and get the ball and lay out for it. It was a really big play for us."

Wales had a single and a home run to help Fayetteville to a 5-0 lead after two innings. He led off with a single when Fayetteville scored four runs on three hits in the first inning. Jackson Down had an RBI double and Matthew Magre an RBI triple before Hart culminated the rally with a two-run single.

Wales then led off the second inning with a home run over the left-field wall to put Fayetteville ahead 5-0.

"Harrison has been on fire the last week," Gallagher said. "He probably got out only two times during our spring break trip. He hit the ball hard and carried on that hitting today."

Rogers managed to score off Davenport in the fourth inning following an RBI double by Hayden Seldomridge. But the Mounties (6-4, 2-1) could not duplicate the threat they had going in the second inning when Hart took away an extra-base hit from Sal Jacobo with two runners on base.

Rogers and Fayetteville will play a return game today beginning at 5 p.m. at Veterans Park in Rogers.

Wes Stang drove in the decisive runs with a two-out, pinch-hit double in the top of the seventh inning as Bentonville defeated host Van Buren and remained unbeaten in 6A-West play.

Keegan Allen led off the seventh with a single and moved to second on Sam Golden's sacrifice bunt before Keaton Cloyd's single put runners at the corners. Stang then entered the game for Parker Charlton and delivered his big hit to center field as both runners scored.

Winning pitcher Devin Hearn then retired the only batter he faced in the seventh, while Reed Ronan picked up the last two outs for the save.

Brooks McDowell had an RBI single and Golden drove in two runs with another single as Bentonville (8-2, 3-0) took a 3-0 lead, but Van Buren tied it with three in the second.

The two teams play again at 5 p.m. today at the Tiger Athletic Complex. The game was originally slated for Thursday but moved up because of the threat of inclement weather.

The Wildcats jumped to a 9-0 lead after three innings and cruised past the War Eagles for their first 6A-West Conference win Tuesday at Arvest Ballpark.

Blake Adams picked up the win, allowing two runs on three hits over four innings for the Wildcats. He struck out four and walked two. James Clardy and Corbin Helms combined for three scoreless innings of relief.

The Wolverines (6-6, 2-1) led 2-1 after one inning, then pulled away with a five-run second. Trammell had an RBI single, followed by an RBI double by Carter to end the outburst, then Trammell's blast made it a 9-1 game in the fourth.

Maddox Thornton picked up the win as he pitched a four-hitter through six innings and allowed just one earned run, and he helped his cause with two hits and two RBIs.

Christopher Harvey didn't make it through the second inning and took the loss for Springdale (6-8, 1-2). Harvey did drive in a run for the Bulldogs.