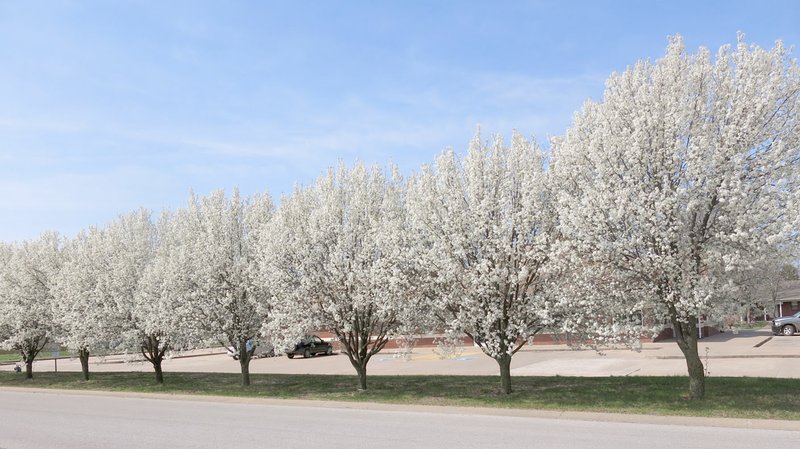 File photo/Northwest Arkansas Democrat-Gazette A line of Bradford pear trees is seen in Gravette on March 28, 2015. Fayetteville urban foresters are encouraging city residents to chop down their invasive trees and replace them with native ones.

Reward: A replacement tree of your choice, but one from around here.

The city has put out a call to residents to cut down the notorious Bradford pear from their properties. Residents have to take a photograph of the slain sapling and send it to the city's urban foresters. Then they will be eligible to receive a free tree.

John Scott, urban forester for the city, said the idea came from the Urban Forestry Advisory Board, a resident panel of the city. They want to get the word out about invasive plant species, he said.

"Of course we love trees. It's not a common thing for me, as an urban forester, to encourage people to remove trees," he said. "But these are problem species out-competing our native species."

The problem with Bradfords is they quickly take over an area and don't create a beneficial habitat for wildlife or vegetation, said Jennifer Ogle with the Fayetteville Natural Heritage Association.

Despite the name, the trees don't grow edible pears. They bear hard little fruits that some birds like. The fruits are junk food though, Ogle said.

The trees are very delicate and can't bear the weight of ice. A strong wind can take them down, she said. The white flowers look nice but smell like a word that's not appropriate to print, Ogle said.

"It just fills the air," she said.

Bradford pears became popular because they're small- to medium-sized trees that are easily trimmed, said Alex Royce, operations manager at White River Nursery on Huntsville Road. They're also resistant to diseases and pests.

Residents will have three opportunities to pick up a replacement tree. About 100 trees will be available. Species include American plum, flowering dogwood, eastern redbud, hawthorn and serviceberry.

The targeted trees should come down before they start blooming. Otherwise, the seeds can spread, Scott said.

The city advises residents should cut down trees only if they know what they're doing. A chain saw is preferable, or calling a private service is recommended.

Scott described the city's initiative against invasive species as a battle, but residents shouldn't take that literally.

"Please don't burn them up or set fire to them or use explosives," he said. "That would be in another realm of problems."

If successful, the city could organize another bounty. Privet and bush honeysuckle are next on the list, Scott said.

The trees will be turned into mulch.

Residents can bring a picture of their chopped-down Bradford pears to the Parks and Recreation Department, or email the photo to [email protected]

• 8 a.m. to noon on first and second Saturdays of the month from April to October.

• 8 a.m. to noon on first Saturdays from November to March.

Free native replacement trees will be available at the following times and locations: