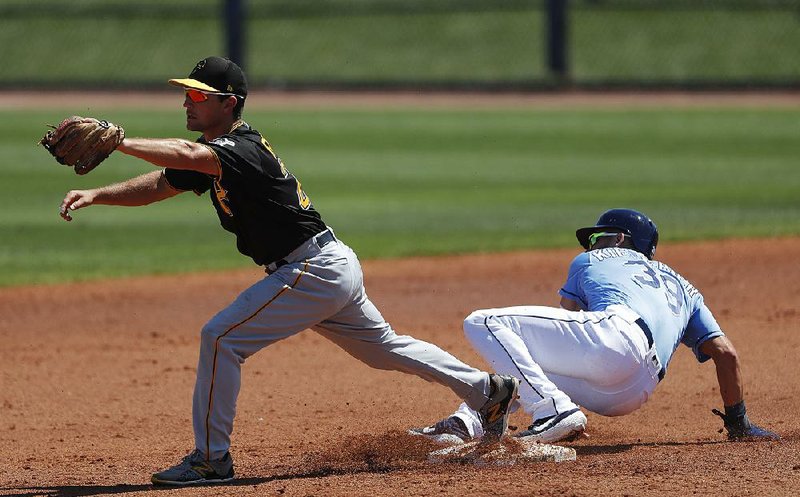 Pittsburgh shortstop Jung Ho Kang (left) forces out Tampa Bay’s Kevin Kiermaier during the fifth inning of the Pirates’ 3-2 loss to the Rays on Friday. Kang was a shortstop before injuring his knee in September 2015. He missed most of the past two seasons because of legal issues and a wrist injury.

Avisail Garcia had 3 hits and 2 RBI, Brandon Lowe had 2 hits and Casey Sadler struck out 3 in three scoreless relief innings as the Tampa Bay Rays beat the Pittsburgh Pirates on Friday. Sadler was re-assigned to minor league camp after the Rays' final game in Port Charlotte this spring.

Pirates third baseman Jung Ho Kang started at shortstop in what Manager Clint Hurdle dubbed an "experiment." Kang was a shortstop before injuring his knee in September 2015. He missed most of the past two seasons due to legal troubles surrounding three DUI arrests in his native South Korea and a wrist injury last season. Kang had two hits, including a double.

Paul Goldschmidt homered and had 3 hits, Marcell Ozuna also went deep and Yadier Molina had 2 hits and 3 RBI for St. Louis in a rout of the Mets. John Gant allowed three runs in 52/3 innings a day after learning he'd lost the battle to be the team's fifth starter to Dakota Hudson. Gant will open the season in the bullpen.

Hector Santiago, a candidate for a bullpen job with the Mets, started and pitched three innings, allowing 5 runs, 7 hits and 3 walks. Jeff McNeil hit his third home run of the spring. Pete Alonso had two hits and an RBI but also committed a throwing error at first base.

Javier Baez and Ben Zobrist each hit their first home run of the spring in a Chicago Cubs split squad victory over the Texas Rangers. Baez hit a three-run shot and raised his average to .317. Jose Quintana pitched six strong innings, allowing 1 run and 4 hits and striking out 6.

Matt Koch made what might be his final appearance with Arizona, logging five innings of two-run ball in a victory over the Los Angeles Dodgers. Koch is out of minor league options and would have to be placed on waivers before being sent down, but may not have a spot on the opening day roster.

Justin Turner homered for the second consecutive day, his third of the spring with Los Angeles. Jeren Kendall, the Dodgers' first-round pick in 2017, also homered. Dennis Santana struck out 5 in 3 innings, allowing 3 runs, 3 hits and 2 walks.

Mike Trout hit a three-run home run, and Kole Calhoun and Jonathan Lucroy each doubled for Los Angeles Angels in a victory over the Chicago White Sox. Trevor Cahill walked 3 over 41/3 innings but allowed just 1 run and 4 hits while striking out 4.

Opening day starter Julio Teheran allowed 2 runs in 5 innings, striking out 5 for Atlanta in a victory over Detroit. Wes Parsons dominated in relief, striking out five over 21/3 scoreless innings.

Niko Goodrum had three hits for Detroit and is batting .354 this spring. Tyson Ross allowed three runs in 51/3 innings.

Nelson Cruz had two hits and Max Kepler had two RBI for Minnesota. Kyle Gibson was charged with 5 runs and 8 hits in 22/3 innings.

Aaron Sanchez dominated, pitching one-hit ball over 6 innings with 2 walks and 3 strikeouts as Toronto blanked Baltimore. The righty has a 1.53 ERA this spring.

Chris Davis was 0 for 2 for Baltimore and is batting .138 this spring as he tries to bounce back from a historically bad 2018. Mike Wright allowed two runs in four innings.

Giancarlo Stanton hit two home runs, doubling his spring total and driving in three for New York in a victory over Philadelphia. Jonathan Loaisiga struck out seven in four innings.

Jared Eickhoff allowed 1 run in 4 innings, striking out 6 and walking 3 for Philadelphia.

Max Scherzer struck out 12 in 7 innings for Washington but allowed 3 runs and 10 hits as the Nationals and Marlins played to a tie. Adam Eaton had 2 doubles, 3 hits and 2 RBI.

Neil Walker hit his third home run of the spring for Miami, and Starlin Castro had three hits.

Addison Russell had two hits to lead Chicago. Ian Happ struck out twice and went 0 for 3, and Duane Underwood Jr. allowed four runs in one inning.