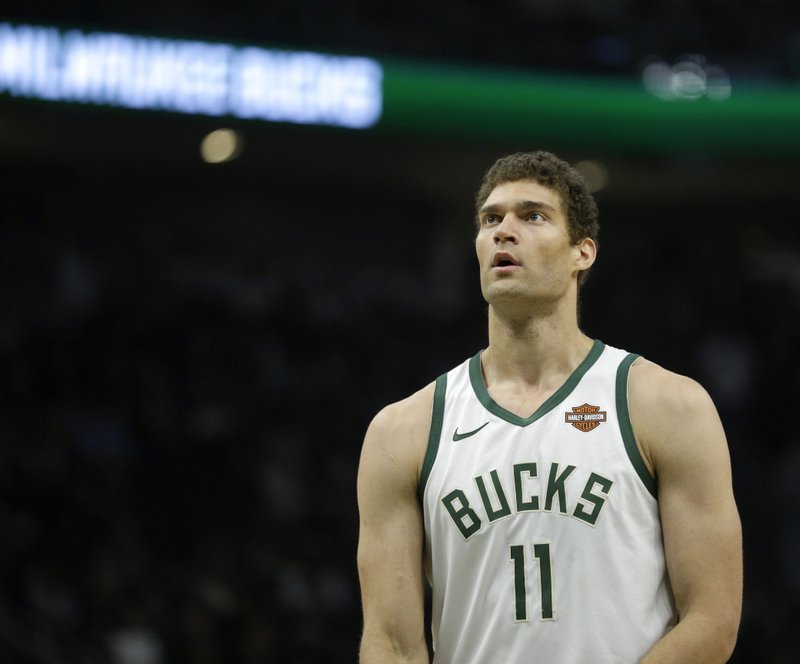 Milwaukee Bucks' Brook Lopez shoots a free throw during the second half of an NBA basketball game against the Charlotte Hornets Saturday, March 9, 2019, in Milwaukee.

In case more proof was needed that the game of basketball has changed wildly in the last few years, check out the starting center for the team with the best record in the NBA -- he is often nowhere near the basket.

Milwaukee's Brook Lopez hardly ever took three-pointers in high school, or college, or his first eight seasons in the NBA. He's a 7-footer, and 7-footers were told forever to go to the low post and wait to see if someone throws you the ball. Those days are largely gone and perhaps no NBA big man has seen his job description change more than Lopez.

He's taken more three-pointers this season -- 461 and counting -- than any 7-footer in any NBA season. And that comes after he was 3 for 31, total, from beyond the arc in his first eight seasons as a pro, with many of those heaves coming in end-of-game or end-of-shot-clock situations.

"In our practice facility we have boxes out deep beyond the three-point line, from areas we know we can get reps at," Lopez said. "Eventually, you just get the confidence to take them in games."

Clearly, he's not lacking for confidence.

Per the data that the NBA tracks, Lopez is 6 for 15 from 30 feet or deeper this season. In 63 of his 72 games with the Bucks, he's taken more three-pointers than he has two-pointers.

This is an age where everyone is shooting the three ball, and the NBA record for three-pointers made will soon fall for a seventh consecutive season, but the biggest guys on the floor represent the biggest demographic in the newfound commitment to shooting from deep -- with veterans like Lopez, Detroit's Blake Griffin and Toronto's Marc Gasol have gone from rarely shooting them to having the three in their everyday repertoire in recent years.

The above-the-break three -- it basically means any shot not taken from the corners or low on the sidelines -- has been Lopez's forte this season. He's tried nearly 400 of those.

It is a dramatic change from his early days. In his first 490 NBA regular-season games, Lopez made four three-pointers. In game No. 491, he made four in that one alone. The switch in his game looks like it started overnight, but the fact is that the outside shot was always something Lopez felt comfortable taking. He just needed an invitation.

Enter Brooklyn Coach Kenny Atkinson. When Lopez played there in 2016-17, Atkinson gave him the green light to take threes.

Lopez hasn't stopped taking them since. And when Milwaukee Coach Mike Budenholzer sat down to figure out the best ideas for his first season with the Bucks, taking advantage of Lopez's skills from deep quickly became an important part of the plan.

"There was no making peace with it," Budenholzer said. "Brook obviously had done a lot of three-point shooting in Brooklyn with Kenny and that was a big part of the vision in bringing him to Milwaukee. Some of them that are super-deep, I kind of wonder and I'm not sure that was the vision. But I'm beyond comfortable and beyond appreciative of what Brook does. I encourage him and want more."

That's clearly the case. Lopez was 0 for 12 from three-point range in a two-point loss to Phoenix back in November. The very next night against San Antonio, Milwaukee ran its first play of the game for Lopez -- who tried a 27-footer.

"When that happens, you've got to keep shooting," Lopez said.

Budenholzer isn't the only coach to demand more from a 7-footer.

Back in the preseason, Miami's Kelly Olynyk took eight shots in a game and all of them were from three-point range. Heat Coach Erik Spoelstra was tongue-in-cheek angry after the game, not that Olynyk took eight threes -- but because he didn't take 10.

The message was received. Among the 7-footers with at least 1,000 minutes of playing time this season, Olynyk and Lopez are the only ones with more three-point attempts than two-point tries.

"It's been a process, getting to where I am now and being comfortable with that role," Olynyk said.

For the Bucks, Lopez has been a perfect fit. Not only has the three-pointer been a weapon -- he shoots 37 percent from distance -- but it has also been most valuable in creating lanes for Milwaukee star and MVP candidate Giannis Antetokounmpo to do his thing in the lane and around the basket.

"It just helps space the floor and gets everyone easier looks and easier shots," Lopez said. "We're all out here just trying to play the system as best we can."