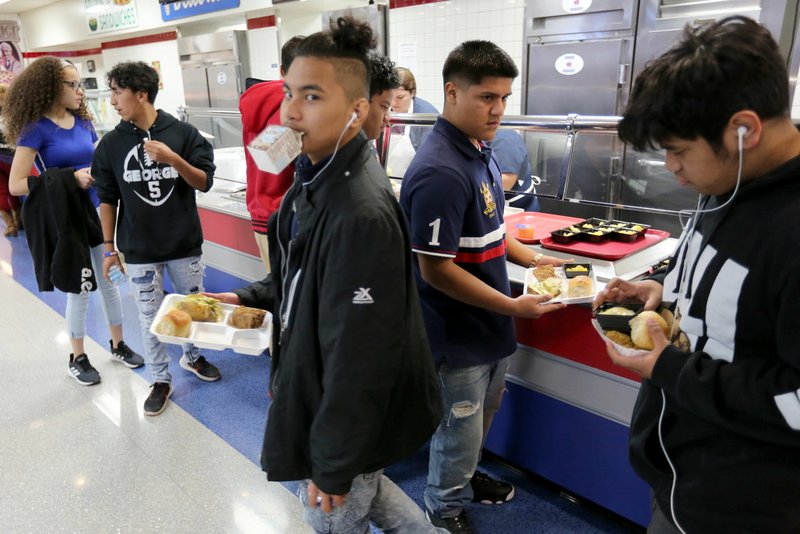 NWA Democrat-Gazette/DAVID GOTTSCHALK Johnny River, a freshman at George Junior High School, walks with his lunch Friday through the cafeteria at the Springdale school. University of Arkansas for Medical Sciences researchers are working with the Springdale School District to help reduce sodium in school lunches.

The University of Arkansas for Medical Sciences is in its third year of the federal Centers for Disease Control and Prevention's program to reduce sodium in communities. The school received a nearly $2 million grant -- $395,000 per year -- from the centers for the five-year program seeking to reduce sodium at organizations selling food, such as restaurants, schools or hospitals.

Springdale School District has cut more than 11 percent of sodium in its school lunches, according to a news release from the medical school.

"We are constantly looking to lower the sodium in our food," said Gena Smith, child nutrition director at the Springdale School District.

"CDC strongly supports sodium reduction as an achievable and effective public health strategy to reduce blood pressure and prevent heart attacks and strokes," according to the centers' website.

High blood pressure is a major risk factor for heart disease and stroke, and many studies support a direct relationship between sodium reduction and lower blood pressure, Lindsey Johnston of the centers said.

One of the sessions focused on a no-salt salsa recipe.

"That's an example where they could take an existing menu item like tacos or nachos or taquitos and add something that's going to make it more flavorful and hopefully more nutrient-dense without adding any salt to it," Faitak said.

The district has made an effort to purchase foods lower in sodium, but that can be a challenge. Rather than removing popular high-sodium foods, such as pickles, the cafeterias started offering them less often, Smith said.

Taking away salt means getting creative and adding other spices and herbs, Long said. Those recipes introduce kids to new flavors. The goal is to not sacrifice taste, and the cafeteria staff has let students taste new recipes before putting them on the menu, Smith said.

"I don't think they notice the changes. If I put pizza out on the line and it tastes good, they don't care," Smith said.

The Philadelphia Department of Health, another grant recipient, has worked with restaurants to help them reduce sodium, said Dr. Cheryl Bettigole, director of the chronic disease and injury prevention division. It helped reduce sodium by 30 percent at more than 200 Chinese restaurants and is working with 13 Asian buffet restaurants by making changes such as modified recipes, smaller plates, smaller scoops and by-request-only soy sauce packets.

Most Springdale students eat school lunches, and about 72 percent of students receive free or reduced-price lunches, Smith said. The School District also has a large number of Marshallese students, who can be at a higher risk of getting diabetes, according to the Centers for Disease Control.

Faitak said between 40 and 50 percent of Springdale's Marshallese population has diabetes or is on the verge of developing diabetes. Although the university's work with the School District didn't target Marshallese students, reducing sodium lowers the risk for diabetes, she said.

Although people need some sodium to be healthy, almost no one in Northwest Arkansas is at risk of not getting enough sodium, Long said.

Kids in the United States consume about 1,000 milligrams more of sodium per day than they should, Faitak said. That's equivalent to about half a teaspoon of salt.

"Most of that comes from processed food," she said. "We're not born with a really high tolerance for salt or that desire for it. That really grows over time, so by interacting with kids, we're hoping to temper that desire for those super-salty foods. Young kids don't even like really salty foods. They'll say it's too spicy, or they interpret that flavor negatively, so hopefully, by intervening at the school level, we can develop that preference for less salty foods."

The program has allowed registered dietitians and nutritionists to work with school staff, and researchers to collect and track data.

"We can analyze their meals," Long said. "That doesn't cost Springdale Public Schools anything. UAMS is out there trying to augment things that busy school staff and busy community meal program staff don't have the time or the money to do. It's very exciting for us as medical school researchers to get out in the world and help people make small changes that are going to affect thousands of kids every day. That's a huge opportunity, especially when it's affecting their long-term health in ways that they don't necessarily notice."

The researchers have also worked with other organizations, such as Samaritan Community Centers in Springdale and Rogers. They also plan to work with schools in Farmington, which Faitak said will be a contrast from Springdale because Farmington is a more rural area with six schools compared to Springdale's 29 schools.

"Hopefully, it'll show us common things that can be used not only in Northwest Arkansas or Arkansas, but across the country as well. That's really the goal with projects like these -- to establish practices that other partners, other states and other agencies can implement in their communities," Faitak said.