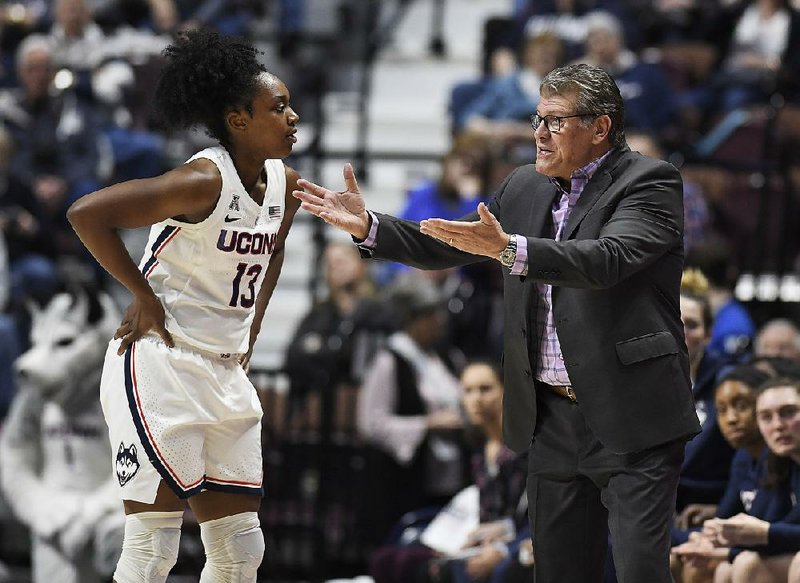 Connecticut guard Christyn Williams (Central Arkansas Christian) gets instructions from Coach Geno Auriemma earlier this week during the Huskies’ 81-45 victory over South Florida in the semifinals of the American Athletic Conference Tournament in Uncasville, Conn. Williams scored 39 points over UConn’s three victories in the tournament, something Auriemma said helped the Huskies overcome the loss of senior Katie Lou Samuelson.

STORRS, Conn. -- The No. 2 Connecticut women are expected to get a No. 1 seed Monday in the NCAA Tournament for a 13th consecutive year, but this one feels a little different.

The Huskies have a regular-season loss (two in fact) for the first time since 2014. They also begin play with a big question mark surrounding All-American Katie Lou Samuelson.

The senior sharpshooter, who averages nearly 19 points, missed the last game of the regular season and the entire American Athletic Conference Tournament with a back injury.

Samuelson is expected to return for the NCAA Tournament, but Coach Geno Auriemma said he understands his team is considered vulnerable.

"I don't think anybody's being wrong when they say, 'We wouldn't pick Connecticut to win the national championship or go to the Final Four,' " Auriemma said. "I'm not surprised at all. I think they're right. I think it should be that way. I mean, we've been to 11 in a row. What, are we going to go to 30 in a row?"

It's not that the Huskies (31-2) are bad or even just very good. Even without Samuelson, they cruised through the AAC Tournament, winning their three games by an average of 28 points.

But in addition to their two losses -- 68-57 to Baylor and 78-69 to Louisville -- they've had some moments this season where weaknesses have been exposed.

Depth and defense are both concerns. The UConn bench is averaging just 10.7 points, and the Huskies trailed in both of their final regular-season games by double digits before rallying to win.

But AAC Player of the Year Napheesa Collier, who is averaging a double-double this season (20.9 points, 10.5 rebounds), said the team keeps improving.

"Especially in our losses this year, we learned a lot," she said. "We were put in situations where now, if we were to get down, we're not panicking, because we know we've been in that situation."

Playing and winning the conference tournament without Samuelson could be a significant step on the road to the Final Four, Auriemma said.

Freshmen Olivia Nelson-Ododa and Christyn Williams (Central Arkansas Christian) both stepped up in her absence. Williams -- who is averaging 10.6 points, 3.1 rebounds and 2.0 assists this season -- scored 39 points over the three games, and Nelson-Ododa pulled down 32 rebounds and blocked 7 shots.

"If we can count on those young kids, now when Lou comes back, we have a much more complete team," Auriemma said. "We have more options and we have more confidence in ourselves and each other. Sometimes that does take some pressure off Lou and Pheesa if they know that, hey, other people can step up and make shots."

UConn has been to the Final Four 11 consecutive seasons and is aiming for its 12th national championship in the past 25 years.

"We kind of have our own little circle, and we're confident of what we have in this team and we know that if we play a certain style of basketball, if we do what coach tells us to do, we're going to be a pretty good team in this postseason," guard Crystal Dangerfield said.

The Huskies are expected to be the top seed in the Albany Regional, again playing the first two rounds on their home court in Storrs.

Auriemma bristles when asked whether it's fair the Huskies road to the Final Four has gone through either Bridgeport (about 80 miles from campus) or Albany (about 135 miles) in six of the past seven seasons. The Huskies played five ranked teams this season, winning three games, and dominated in the weaker American Athletic Conference. UConn had the sixth strongest schedule in the nation, according to the NCAA's RPI.

"People think we get breaks," Auriemma said. "We earn our breaks. That's what the rule says. The No. 1 seed in the country goes someplace close."