Second Coming, a comic-book series with Jesus Christ as a character, is getting a second chance after DC Comics canceled it last month before its release. The series, written by Mark Russell and drawn by Richard Pace, will be published by Ahoy Comics this summer. In the satirical comic, Jesus has a superhero roommate named Sunstar and learns what has become of his Gospel on earth.

Russell says his inspiration for Second Coming was to tell a story about power, particularly about how society "has fetishized physical violence and force as being the solution to every problem." Russell says his goal was to examine that notion "by having a superhero who's bought into this ideology being forced to confront somebody who has a completely different approach to human dynamics. Christ seemed like the natural standard-bearer for that nonviolent approach."

The series was originally announced in July at San Diego Comic-Con. The next month, Russell discussed his plans in an interview with Bleeding Cool, a website devoted to pop culture. "The conceit is that God was so upset with Jesus' performance the first time he came to Earth, since he was arrested so soon and crucified shortly after, that he has kept him locked up since then," he says.

There was no adverse reaction until January, when news about the comic was reported by outlets including the Christian Broadcasting Network, Christian Headlines and Fox News. The Christian Broadcasting article described Second Coming as "closer to blasphemous than biblical" and noted the comic's plans to present Jesus as a failure. A Citizen Go online petition asking DC to pull the series from its publication schedule garnered more than 235,000 signatures. The petition described the comic as inappropriate, and asked, "Can you imagine the media and political uproar if DC Comics was altering and poking fun at the story of Muhammad ... or Buddha?" DC canceled the title Feb. 13.

Russell says that Second Coming, which will run for at least six issues starting July 10, is respectful of what Christians "profess to believe." He added, "It's not as respectful as to what they actually do. It's not a satire of Christ so much as it is a satire on how his followers of the last 2,000 years have turned his message of forgiveness and empathy into one of power and domination, which is as un-Christlike as one can possibly imagine."

This is not the first time the writer has taken on God. In 2013, Russell wrote God Is Disappointed in You, with illustrations by Shannon Wheeler, which promised to strip the Bible of its arcane language to get to its core message.

Artist Richard Pace was recruited by the original editor of Second Coming when it was planned for Vertigo, an imprint of DC Comics, and he said he was intrigued by the mix of religion and satire. "I'm not afraid of that, so I said sure," Pace recalls. He says he has received death threats since the project was announced.

"No one has read the book other than the people who are working on it," Pace says. "I know full well that the only person coming out of it looking good is Jesus."

Russell and Pace say the delay in publication and the move from DC to Ahoy has given them time to improve Second Coming. The first issue will include six extra pages that recount Christ's memories of a childhood friend during his first visit to earth. And DC had requested some changes -- like less coarse language and adding fig leaves to Adam and Eve in the Garden of Eden -- that are no longer necessary. While Russell was ready to make them, he knew more would be coming, he says.

"That's what made me realize that this was going to slowly turn into a more watered-down version of what I had originally envisioned," he says. When he asked for the rights of the project to be returned, DC agreed.

Tom Peyer, editor-in-chief of Ahoy Comics, was happy to welcome Second Coming into its flock of series, all of which have an element of comedy or satire. The company began publishing in September.

Peyer says he was not worried about the prepublication reaction to the series. "I don't think a comic book is anything to get that upset about," he says. "I just think it's a really good story that people have a right to read." 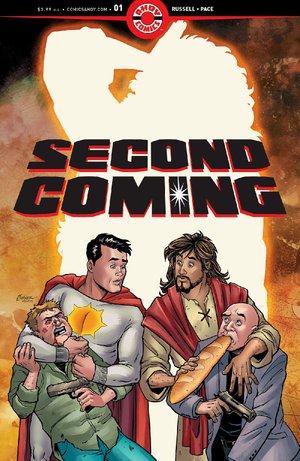 Photo by Special to the Democrat-Gazette/Ahoy Comics via The New York Times
The cover of the first issue of Second Coming, a forthcoming superhero comic-book series with Jesus Christ as a character. The series was originally announced in July at San Diego Comic-Con, but DC Comics canceled the title after a petition.