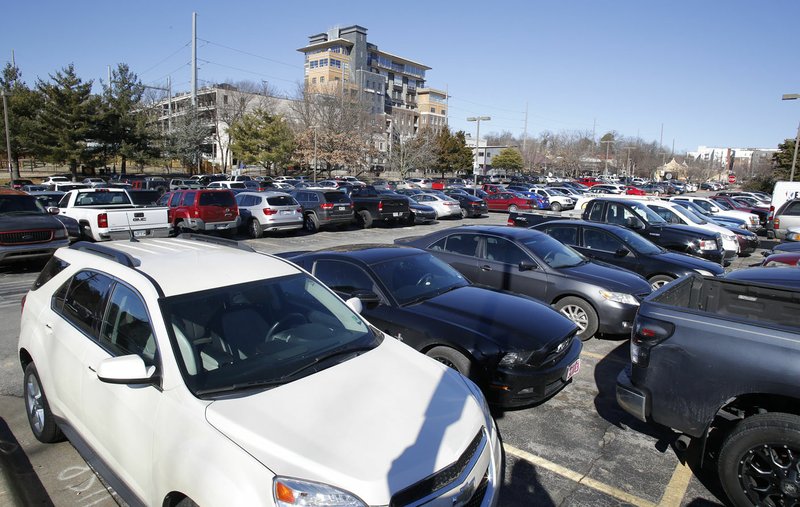 FAYETTEVILLE — Downtown would end up with more parking spaces than it has now, but in a different spot, if voters approve building an arts corridor, according to a study released Tuesday.

The parking lot west of the Walton Arts Center could be replaced with a civic space if voters approve a nearly $32 million bond issue to build an arts corridor. Of that, $10 million would be used to build replacement parking for the 290 spaces that would be lost.

The election to continue the city’s 1 percent sales tax to pay for about $226 million in projects, including the arts corridor, is April 9. Early voting begins April 2.

The study City Council members received from Garver Engineering identifies three places downtown where it would be possible to build a parking deck and evaluates those options.

The potential locations are the train depot lot at the northwest corner of Dickson Street and West Avenue; the lot east of the Spring Street deck; and the Nadine Baum Studios property.

The city would have to negotiate with landowners at the depot lot. It owns the lot along Spring Street. The city and University of Arkansas jointly own the Nadine Baum property.

Nothing would happen with the arts space until new parking is available, Mayor Lioneld Jordan said.

“This replacement parking is going to be in place before we ever touch that Walton Arts Center parking lot,” he said. “I don’t think we can emphasize that enough.”

All of the suggested sites are within 1,000 feet of the Walton Arts Center entrance on Dickson Street.

The depot parking deck could have 434 or 436 spaces, depending on the layout. One plan would place the deck in the lot in front of Arsaga’s, north of the Bank of Fayetteville’s train bank. Part of that deck would extend into the spaces north of Arsaga’s. The other design would move the train bank a few feet closer to West Avenue and the deck would take up most of the lot.

The site in front of Arsaga’s and north would add 39 more spaces than now. The second site taking the entire lot would have 33 more spaces.

The study recommends the first site option, which would have 4½ levels. Taking up more of the lot would make a 3½-level deck possible but require removing the train bank’s drive-through.

The second location at the lot east of the Spring Street deck on North School Avenue also has two options. One would remove two homes at the south end of the site along Spring Street. The study recommends the second option.

That Spring Street site, referred to in the study as the east lot, could fit a 389-space, four-story deck, according to the study. Going with the plan’s recommended second option would result in 40 more parking spaces than what’s available now. A 3,810-square-foot, one-story building could fit along School Avenue. The deck’s entrance would be 605 feet from the Walton Arts Center.

The last location would require tearing down Nadine Baum Studios. A 338-space, 4½-story deck could go on the southern end of the property, with potential development to the north. The net gain on parking would be 26 spaces. A small building could go on West Avenue and a larger one along Meadow Street. It would have the farthest walk to the Walton Arts Center at 700 feet.

Jordan said he’s not fond of the Nadine Baum location because he wouldn’t want to tear down a perfectly good building. The other two sites have potential, he said.

The depot lot has its challenges because the city and multiple landowners and business owners would have to come to an agreement, he said.

Peter Nierengarten, director of sustainability and parking, said city administrators will use information from the study while negotiating with business and landowners. Ultimately, the City Council would decide on a location and plan. Department heads would narrow the three locations to one and present a more concise budget and site plan.

“We won’t be able to commit to any of them until after April 9, and we know we’ve got $10 million we can actually put toward this,” Nierengarten said.

Stacy Ryburn can be reached by email at sryburn@nwadg.com or on Twitter @stacyryburn.

Read the full study from Garver Engineering about downtown parking on our website, nwadg.com 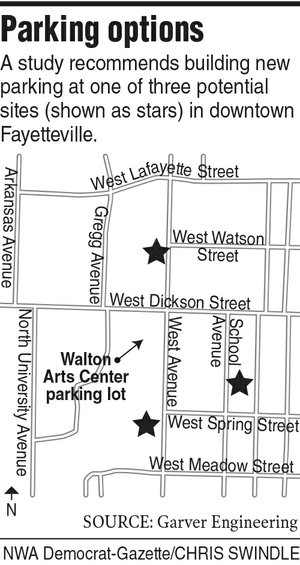