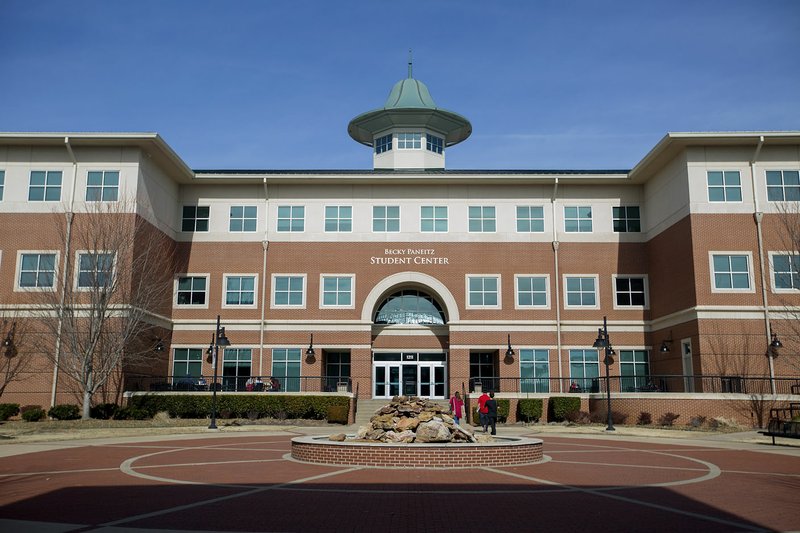 File Photo/NWA Democrat-Gazette/JASON IVESTER Students walk across campus to the Becky Paneitz Student Center on Jan. 30 at Northwest Arkansas Community College in Bentonville. The college's board approved Thursday a balanced budget with a 3.1 percent increase over the 2017.

BENTONVILLE -- Northwest Arkansas Community College students who don't live in the district will see an increase in tuition this fall.

The college's district is defined by the Bentonville and Rogers school districts. Those who live in the district pay a tax based on their assessed property value. In-district tuition cost will remain at $75 per credit hour.

Now that the tuition and fees have been set, here are the next steps for the fiscal 2020 budget:

• March and April: College officials will prepare the budget.

• May: Budget will go before trustees for approval.

• June: College will submit the budget to the Arkansas Department of Higher Education.

The lab fees for the graphic design and art programs also will increase $15, from $35 to $50 per course.

The college's Board of Trustees approved 6-1 the tuition and fee increases Monday. Mark Scott, trustee, was the only one who voted against the increases.

"With this increase, I will be able to balance the budget," said Gulizar Baggson, associate vice president of finance for the college.

The college's fiscal year runs from July 1 to June 30.

Baggson didn't give an estimate on what the 2020 budget would be. Last year's budget was $42.2 million.

Joe Spivey, board chairman, last week asked Baggson to recalculate the increases by keeping the in-district rate flat by increasing the others.

"It's important that we be fair to our millage payers in the Rogers and Bentonville school districts," he said at the March 5 work session. "We need to keep our stakeholders in mind when we're considering any kind of tuition increase."

Forty-four percent of the 7,979 students enrolled in the 2018 fall semester paid in-district tuition, according to the college's fact book.

Todd Swartz, trustee, emphasized Monday the in-district cost should stay the same because property values have increased over the last five years, meaning those living in-district have already seen the rate increase.

Tuition rates will be re-evaluated in a year, Baggson said after the meeting.

Trustees talked last week about the need to lock rates in for at least two years so students can know what they're degree is going to cost, but no one brought that point up during Monday's meeting.

They did, however, discuss and approved building a 12,000-square-foot physical plant for no more than $1 million on the northeast corner of the campus and refurbish the current plant so it could be used for more workforce education programming. Scott was the only one who voted against it.

The physical plant is more centrally located on campus.

Scott questioned how it was decided the current plant would be best used for workforce education programming instead of other needs, such as student services, that need to be expanded.

What prompted the new plant and reuse of the current one was the Arkansas Department of Education's desire to see more workforce education programs implemented, said Debi Buckley, vice president of administration.

The state department has other points of emphasis, such as retention, too, Scott said.