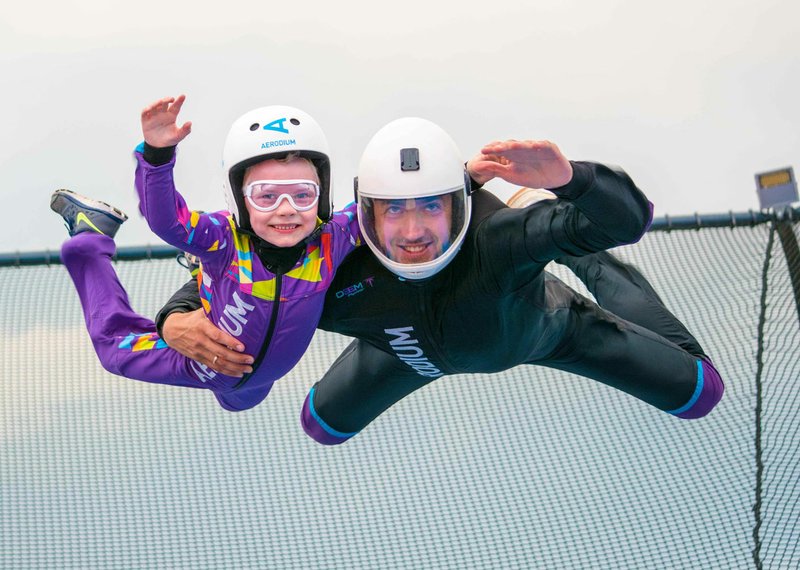 Want to climb? Or tunnel? How about explore a giant maze made of shipping containers?

It might sound a little like the City Museum in St. Louis, but it's much closer to home. The 80,000-square-foot Fritz's Adventure, now in its fourth year in Branson, offers a ropes course; a climbing wall that looks like an old warehouse and includes two full-size utility poles; a zipline; a laser adventure room; and more. And come the end of May, it will offer a chance to fly.

WHEN — Opening in late May; Fritz’s Adventure is open year-round

This will be the second season for the Aerodium (pronounced air-oh-DEE-um) Outdoor Flying Adventure, an offering unique to Branson, says Jake Schenk, general manager of Fritz's Adventure.

"We found it at a conference in 2017 and immediately thought it would be an awesome fit," he says. Besides being a favorite with visitors, the vertical, outdoor wind tunnel flight experience is "essentially an active billboard for us," he says, situated as it is in the outer front parking lot of Fritz's Adventure. Schenk explains it's the only one like it located outdoors -- which has both pluses and minuses. It's seasonal, he says, because no one wants to fly when when it's below 50 degrees. But it also comes with more freedom than the "restrictive tube" of an indoor wind tunnel and a view that lets participants "see for miles."

Specifications for the Aerodium say flyers must be 4 or older and weight less than 300 pounds. The only ones who can't fly have a history of neck, back or heart problems, a history of shoulder dislocations or are pregnant.

Schenk says it's really true that almost anyone can take to the air.

"My son, who was 5 at the time, was one of the first flyers," he says. "Everybody goes with a trained flyer, so nobody is by himself."

That "flight instructor" is "holding on to you, adjusting your body position to make sure you're comfortable, and then, during the second part of the flight, they'll tandem fly with you up and down," Schenk explains. "You're in a position with your hands out, your back arched and your legs spread out -- and you're flying!"

The only other requirement, he says, is that the flyer be able to understand the hand signals he's taught before the flight -- "because it's too loud to talk!"

The Aerodium experience -- which is separate from the rest of Fritz's Adventure -- starts when a guest makes a reservation, selects a flight time and completes a waiver. Upon arrival, you'll head to Flight School, where you'll learn about the process of the flight, the postures, the safety standards and those hand signals Schenk mentioned. Then it's off to the locker room to don a flight suit -- which fits over your clothing -- and add earplugs, safety glasses and a helmet.

The experience lasts either two minutes -- the Maverick -- or four minutes -- the Top Gun -- which might sound like a lot of work for not a lot of payoff, Schenk admits. But then he explains that the drop of a skydive lasts only about 30 seconds before you pull the chute, and a two-minute Aerodium flight is the equivalent of dropping 10,000 feet four times -- or eight times for the four-minute option.

Print Headline: 'Talk To Me, Goose'