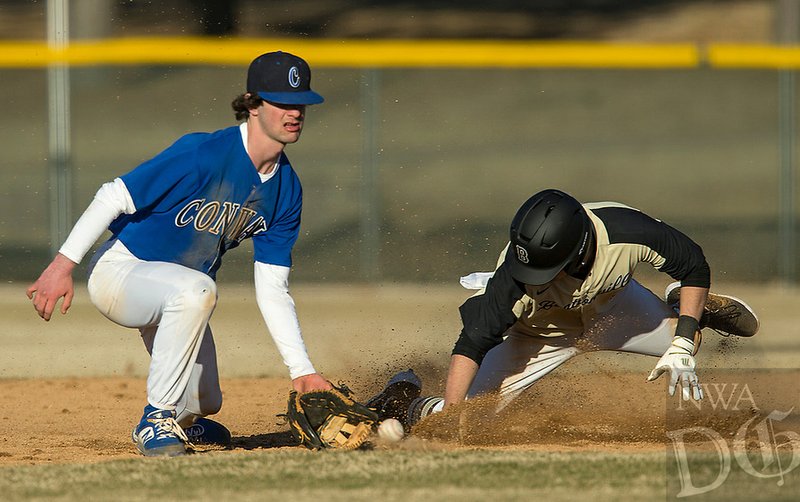 Clay Tollett, Conway second baseman, reaches for a pickoff throw as Brooks McDowell of Bentonville slides in safe at second base in the 3rd inning Wednesday, March 6, 2019, during the Best Sports Classic tournament at Veterans Park in Rogers. - Photo by Ben Goff

The Tigers scored four runs in the third inning and went on to defeat Conway 10-6 in the first round of the Best Sports Classic at Veterans Park. The Classic continues with games today and Friday.

Bentonville received plenty of production from the middle of its lineup with Levi Bennett and Karson Coffee collecting three hits apiece. Sam Golden, the Tigers' cleanup hitter, walked three times and had a two-run single in the third inning when Bentonville scored five runs to take a 6-0 lead.

Payton Allen led off the inning with a double and Coffee, who had an RBI triple in the first, added a single. Cade Appleman hit a two-run double in the fifth when Bentonville moved ahead 10-3.

"I thought we came out and had good energy," Bentonville coach Todd Abbott said. "We had a lot of good at-bats. We made plays when we had to make them and pitches when we needed them."

James Hicks had a two-run home run while Trey Goodwin a run-scoring triple and RBI single for Conway (1-1).

Bentonville (1-0) outhit Conway 12-9, and the Tigers used aggressive base running to move players into scoring position.

"Karson, he hit the ball well, and Levi, when he got on base, ran the bases well," Abbott said. "It was a good day for sure."

Bentonville starter Devin Hearn struck out six in four innings to earn the victory. He worked out of trouble in the third inning after Clay Tollett and Trey Goodwin reached on singles. Hearn then retired three consecutive batters, two on strikeouts, after both Conway runners advanced into scoring position following a balk.

Tanner Strickland went 3-for-3 and drove in two runs, while Marc Sussman added two doubles and four RBIs to lead the Mounties to a big season-opening win at Veterans Park.

Rogers scored seven runs in the bottom of the first and never looked back, banging out 12 hits. The Mounties also took advantage of nine Alma errors.

McKaden Templeton picked up the win, allowing a run on three hits over four innings. He struck out seven and didn't walk a batter.

Ryan Carlson went 4-for-4 with two doubles and drove in three runs, while Alex Nowack hit a three-run home run to lead the War Eagles to the run-rule win.

Heritage scored in five of the six innings and banged out 12 hits. Nowack went 2-for-2 with a triple and a home run, while Vance Tobol also added two hits.

Jeb Brown and Ben Pollock combined on the shutout, pitching three innings each. Brown allowed two hits, struck out six and walked two. Pollock did not allow a hit, struck out seven and did not walk a man.

Three Wildcats pitchers combined on a no-hitter to lead Har-Ber to a shutout win Wednesday in the Best Sports Classic.

Har-Ber had just two hits, but they both went for extra bases as Hunter Wood had a double and Clay Burtrum tripled. Rally Miller and Sam Stephenson drove in two of Har-Ber's three runs.

Harrison's Thailer Lovell was also solid on the mound and did not allow a hit over four innings with three strikeouts, although he walked six batters.

The Wildcats scored five runs in the late innings to go 2-0 on the day in the Best Sports Classic.

Hunter Wood blasted a three-run home run for Har-Ber (5-1) and Charlie Acuff was 2-for-3 with a double and two RBIs. Blake Adams added a triple.

L.T. Ellis was solid on the mound for Siloam Springs, going 4 1/3 innings and allowing just four hits with eight strikeouts.