The state's general-revenue collections in February inched up by $1.2 million over the same month a year ago to $459.1 million, but fell $16.2 million short of forecast.

Both individual income tax collections and sales and use tax collections fell short of forecast in February, the state Department of Finance and Administration said Monday in its monthly revenue report. They are the state's largest sources of general revenue.

"With contractors and more than 3,100 federal employees in the state affected by the [federal] government shutdown in January, we experienced lower than anticipated payroll withholding and sales tax collection [paid to the state in February]," Gov. Asa Hutchinson said Monday in a written statement.

"I anticipate the state to return to expected revenue collection next month, but the variance is a reminder to budget carefully with sufficient reserve funds," the Republican governor said.

John Shelnutt, the state's chief economic forecaster, said that "looking at national indicators that are weekly and monthly, it looks like the indicators are turning around, turning back up from the government shutdown period and we expect that to flow through as state revenues."

"I don't think we are in trouble, but we sure got to see next month's [general-revenue collections] to make up our mind," Teague said in an interview.

February's general-revenue collections are a record for the month, exceeding the previous high of $457.9 million last year, said Steve Wilkins, a tax analyst at the finance department.

February is the eighth month of fiscal 2019, which ends June 30.

During the first eight months of the fiscal year, general-revenue tax collections increased by $113.4 million, or 2.7 percent, over the same period last fiscal year to $4.34 billion, which is $8.2 million, or 0.2 percent, below forecast.

Tax revenue and some special government expenditures come off the top of total general revenue, leaving a net amount that state agencies are allowed to spend.

The state's projected general-revenue budget for fiscal 2019 is $5.63 billion -- $172.8 million more than the budget for fiscal 2018. The Revenue Stabilization Act that distributes state general to state-supported programs also would set aside $48 million of what the governor considers surplus money for a restricted reserve fund and another $16 million to help match federal highway funds.

Under a 2017 law, Hutchinson's plan to cut individual income tax rates for people with taxable income below $21,000 became effective Jan. 1. The cuts are projected to reduce revenue by about $25 million in fiscal 2019 and $25 million more in fiscal 2020.

The state's sales tax on groceries also was cut from 1.5 percent to 0.125 percent on Jan. 1 under a 2013 law that used savings from the end of desegregation payments to three Pulaski County school districts to finance that tax cut of about $61 million a year.

According to the finance department, February's general revenue included:

Withholdings are the largest category of individual income tax collections. They increased by $6.3 million, or 3 percent, over February a year ago to $221 million, which fell $9.1 million below forecast.

"We expected a larger growth rate than what we got," Shelnutt said. He said the state didn't collect as much in income tax withholdings as expected in February because more than 3,000 federal government employees in Arkansas weren't paid for January because of the federal government shutdown. The shutdown was caused by a budget stalemate between President Donald Trump and primarily U.S. House Democrats.

"There was weakness in consumer spending and business categories and year-to-year sales tax on motor vehicles was down slightly also," Paul Louthian, deputy director of the finance department, said.

• A $2.5 million, or 49.6 percent, increase in corporate income tax collections over the same month a year ago to $7.7 million, which exceeded forecast by $2.5 million, or 45 percent. Higher estimated payments accounted for most of the gain.

Hutchinson and the Legislature have enacted Act 182 that would implement the governor's plan to cut the top individual income tax rate from 6.9 percent to 5.9 percent over a two-year period. State officials project his income tax plan will reduce revenue by about $97 million a year after it's fully implemented.

The state House of Representatives on Monday approved the governor's plan to raise $95 million a year for state highways by adding or raising some taxes and fees. The bill also would raise about $13 million a year apiece for cities and counties. 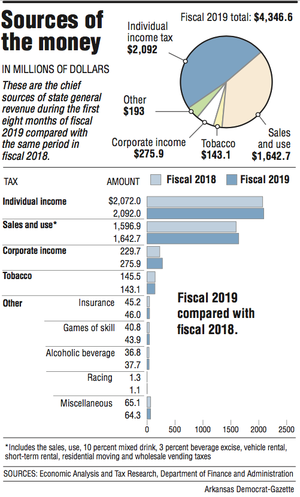