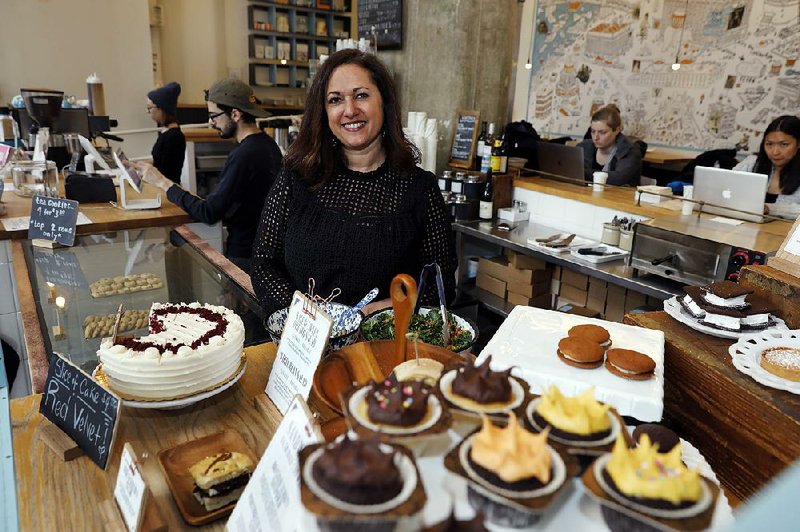 Dawn Casale, shown last month in her One Girl Cookies shop in the Brooklyn borough of New York, says she doesn’t oppose a proposal to require that private businesses provide paid time off for employees, but she feels that the city needs to help small businesses make ends meet.

NEW YORK -- A debate over whether New York City should make a pioneering move to require paid vacation has both sides saying: Give me a break.

Mayor Bill de Blasio wants New York to become the first place in the 50 states to require private businesses to provide time off with pay. He casts the idea, which is awaiting City Council action, as a next frontier in workers' rights.

His plan resonates with people like Barbara Vasquez, a former Manhattan retail worker who says she's struggled with health problems that exhausted any sick leave she accrued as a part-timer.

The 25-year-old likes working and needed the money, but she said she quit after a little more than a year to nurture her health.

"Paid vacations would have helped," said Vasquez. "I actually think I would have been a much better employee because I wouldn't have been so burned out."

But some city-based small business owners say paid vacation would pile on pressures after minimum wage increases and a paid sick leave requirement in recent years. Under the Democratic mayor's proposal, most businesses would have to give full-time workers at least 10 paid vacation days a year, pro-rated for part-timers, in addition to sick time.

"I would love to be able to provide vacation time to my employees ... but the reality of it is not whether or not we want to give it -- it's whether we can give it," says Dawn Casale, the founder of One Girl Cookies, a Brooklyn bakery with three retail shops and about 40 employees. They get paid time off after five years, or sooner if they're managers; others can arrange unpaid vacation, she said.

Casale says she's not against the mayor's proposal but feels the city needs to help small businesses make ends meet, perhaps by helping them negotiate health insurance as a group.

"You can't weather every storm," says Casale, who said she stopped searching for a fourth location because she doesn't find the city conducive to expanding her business.

Many countries require paid vacation, as does the U.S. territory of Puerto Rico. But labor law experts aren't aware of any similar laws within U.S. states.

Still, about three-quarters of private-sector workers had the benefit as of 2017, the latest federal Bureau of Labor Statistics data show. Federal employees and most state and local government workers also get paid time off.

An estimated 500,000 full- and part-time workers in New York City shops, restaurants and other businesses don't have the benefit, city officials estimate.

And "sometimes people just need a break," the mayor said. "You ever hear the phrase 'mental health day'?"

Proposals for a paid vacation law have been floated in the Democrat-dominated City Council for five years, and Speaker Corey Johnson says he supports the concept. He said he's reviewing the mayor's plan, which would apply to all businesses with five or more employees, and that he's monitoring a different version that's been introduced in the council.

Eleven states and dozens of cities have passed paid sick leave laws over the past 13 years, though several other states blocked them. Advocates see paid vacation as a logical next step.

"We shouldn't have to argue that people have more than one reason that they need time," said Ellen Bravo, director of Family Values Work, a national network of paid sick leave campaigns.

De Blasio acknowledged vacation doesn't have the same impact on the population at large. But he says it's "not a healthy society" when half a million New Yorkers can't take a personal day without taking a financial hit.

Andrew Rigie says what's not healthy is the business climate for some members of the NYC Hospitality Alliance, an industry group he runs.

Many restaurants have told the alliance they already plan to cut jobs or workers' hours this year because of minimum wage increases, Rigie says.

"We're concerned that there may not be the types of opportunity that there have been for people" in a field traditionally accessible to immigrants, students and others, he said.

The mayor questions the argument that paid vacations will cost jobs overall. He notes that similar arguments were made about the 2014 sick-leave law, but employment grew.

The total number of jobs in New York City was up 11.8 percent over the five years that ended in December, compared with 9.4 percent in the nation as a whole.

Vasquez, meanwhile, is feeling better and job-hunting with some help from the Retail Action Project, a workers' advocacy group.

She says if she someday gets a job with paid days off, she wouldn't use them lightly.

"For me, vacations would be more for my health," she says.