Woman in 90s still works for peace through activism 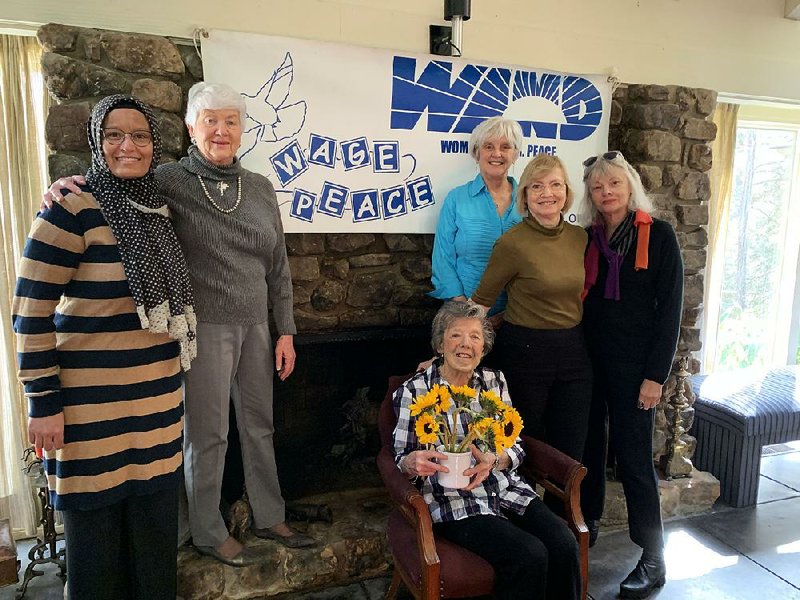 Jean Gordon has been actively advocating for peace for more than four decades.

"At least as far back as the '70s, with the Arkansas Peace Center," she says. "I was real involved in that."

Her involvement included a project called "Pulaski Priorities," in which she compared the amount of federal dollars coming into city and county offices with the nation's military budget.

"There was a direct corollary," she recalls -- every time the military budget went up, the amount of federal money going to local operations went down. "That really impressed me," she says.

"We don't think about the military budget -- why care about it? But it's real important."

Gordon served at one time on the Little Rock School Board, was a big supporter of the Arkansas Repertory Theatre and spearheaded Arkansas Communities for Reform Now, or ACORN, which laid the foundation for the national organization now called Association of Communities for Reform Now -- "That started in this living room," she says, on a wooded lot in Pleasant Valley.

"I was active in Peace Links when Betty Bumpers started that," she adds. The idea was to get more mainstream women into the peace movement. It eventually folded, she recalls, "because they thought the problem was over with. It wasn't."

Gordon was on the national board of WAND when she founded the Arkansas branch in 1997. When Helen Caldicott formed it in 1982, the acronym originally stood for Women's Action for Nuclear Disarmament, but with the ebbing of the Cold War the organization modified it into the less specific Women's Action for New Direction. WAND's mission: "To empower women to act politically to reduce violence and militarism and to redirect excessive military resources to unmet human and environmental needs."

With international tensions now rising and the United States and Russia sparring over nuclear disarmament treaties, the organization could be turning more toward its original mission. A possible new arms race and that "one person can push a button and start a nuclear holocaust" are of particular and chilling concern, Gordon adds. "I hope people realize how dangerous that is."

Her fellow WAND board members recently voted to extend a lifetime membership to Gordon so she doesn't rotate off as most board members do. And, "I require myself to be an active participant," she explains. She maintains the membership rolls and sends a lot of letters to the editor.

WAND, which also accepts men, has meetings once a month, sometimes -- Gordon says she also makes it her responsibility "to remind board members that they're on the board." Monthly Pizza, Peace and Politics forums bring in speakers on current topics of peace and unity, including political candidates; recent guests included Little Rock Mayor Frank Scott Jr. and representatives of the area chapter of Moms Demand Action for Gun Sense in America.

The group's major event takes place on Mother's Day, a luncheon for peace with speakers that isn't so much a fundraiser as a way of attracting new members. The Arkansas Inland Maritime Museum has adopted as its own what used to be a joint July 4 fundraiser; WAND also collaborated with the museum on the construction of the Beacon of Peace and Hope and Peace Garden, adjacent to the museum on North Little Rock's Riverfront Drive.

The WAND chapter also produced a 2011 documentary, Woodruff: A Lesson of Non-Violence, a look at an inner-city elementary school that came together -- "principal, teachers and students -- and developed their own nonviolent ways of dealing with the drug and gang culture that was beginning to take hold in their neighborhood." It played at film festivals in Hot Springs and Batesville and occasionally still pops up on AETN.

WAND partners with other community organizations on various projects, especially Peace Week and the International Day of Peace every September, and the faith-centered April 28 Pilgrimage for Peace.

Now in her 90s, Gordon says, "I think I need to retire, but they're having a hard time getting rid of me. I feel too strongly about the issues. War should not be allowed anywhere. This is the most militaristic country in the world, which doesn't help us make friends. We spent $5.9 trillion on the war on terrorism, and what have we gotten for it? More terrorism."

Women in particular, she says, have more feeling for the costs of war, particularly the cost of human lives. And not just deaths but how war negatively affects survivors.

That, Gordon says, is the importance of the Beacon of Peace and Hope: "Why shouldn't there be a peace memorial? There are so many war memorials." 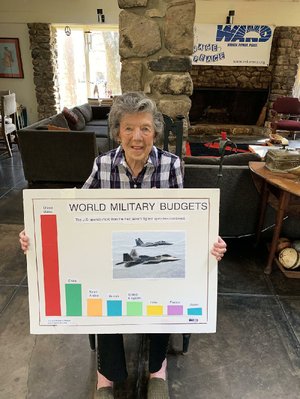