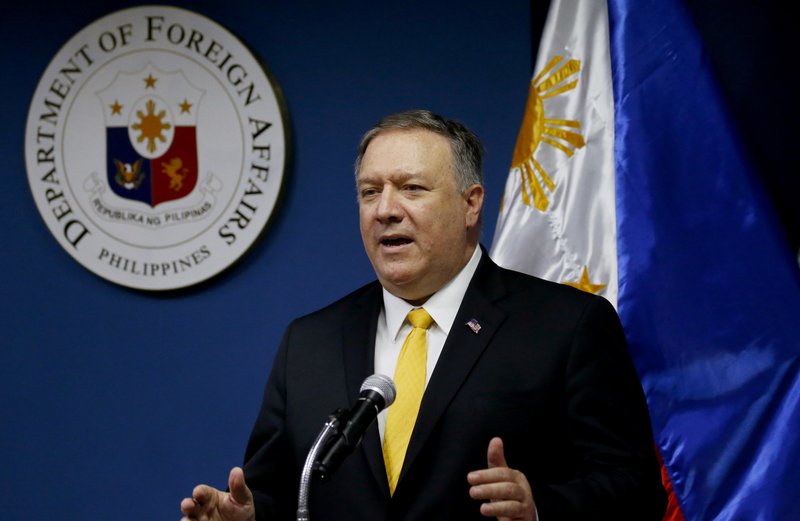 MANILA, Philippines -- U.S. Secretary of State Mike Pompeo said Friday that the United States is committed to ensuring the South China Sea remains open to all kinds of navigation and that "China does not pose a threat" of closing the disputed sea lanes.

Pompeo assured the Philippines during a visit to Manila that America will come to its defense if its forces, aircraft or ships come under armed attack in the South China Sea, in the first such public U.S. assurance in recent memory. His comments were an attempt to address Philippine concerns over the vagueness of the allies' 1951 Mutual Defense Treaty, which Manila wants re-examined.

"I think the whole world understands that [President Donald Trump's] administration has made a true commitment to making sure that these seas remain open for the security of the countries in the region and the world, open to commercial transit," Pompeo said at a news conference in Manila.

Washington will back the Philippines and other countries in the region "so that these incredibly vital economic sea lanes are open and China does not pose a threat to closing them down," Pompeo said.

"China's island building and military activities in the South China Sea threaten your sovereignty, security and, therefore, economic livelihood, as well as that of the U.S.," he added.

In Beijing, Chinese Foreign Ministry spokesman Lu Kang said China and countries around the South China Sea are committed to maintaining regional peace and stability, citing efforts to negotiate a "code of conduct" aimed at preventing disputes from escalating.

"If countries outside the region, such as the United States, really keep in mind the peace and well-being of the regional people, they should not stir up troubles in the region," Lu said at a regular briefing.

The long-seething territorial disputes are a key irritant between Washington and Beijing, which has turned several disputed barren reefs into islands with runways and other military facilities. The U.S. has declared that the peaceful resolution of the disputes and freedom of navigation and overflight in the contested areas are in the U.S. national interest.

In addition to China, the Philippines, Vietnam, Malaysia, Taiwan and Brunei have overlapping claims in the strategic waters. U.S. Navy ships have sailed close to Chinese-occupied islands to assert freedom of navigation, provoking angry protests from China and tense moments between the rival naval forces.

Philippine Foreign Secretary Teodoro Locsin Jr. said in the news conference with Pompeo that the Philippines feels confident, citing assurances from the top U.S. diplomat and Trump to President Rodrigo Duterte that, "We have your back."

Philippine Ambassador to Washington Jose Romualdez said Thursday that Defense Secretary Delfin Lorenzana will meet Pentagon officials in Manila this month for initial talks on Manila's proposal to review the 1951 defense treaty, which calls on the allies to come to each other's defense against an external attack. Formal talks will be scheduled after, he said.

While other Philippine officials wanted clarity in the treaty, Locsin differed. "In vagueness lies the best deterrence," Locsin said.

Duterte and his top officials met Pompeo late Thursday at a Manila air base, where the U.S. official flew in from Hanoi. It's not clear how Duterte, who has been critical of U.S. security policies and has openly praised China and Russia, responded to U.S. concerns over China's actions in the disputed waters.

Pompeo said he raised the importance of human rights, the rule of law and civil liberties in his talks with Philippine officials, though he did not elaborate on how Duterte or other officials reacted.

"We have an expectation of free and open press everywhere, we communicate that to adversaries, to our partners and friends. We are never shy about talking about its importance," Pompeo said.

Information for this article was contributed by Liu Zheng of The Associated Press.

Print Headline: U.S. tells Philippines, 'We have your back'