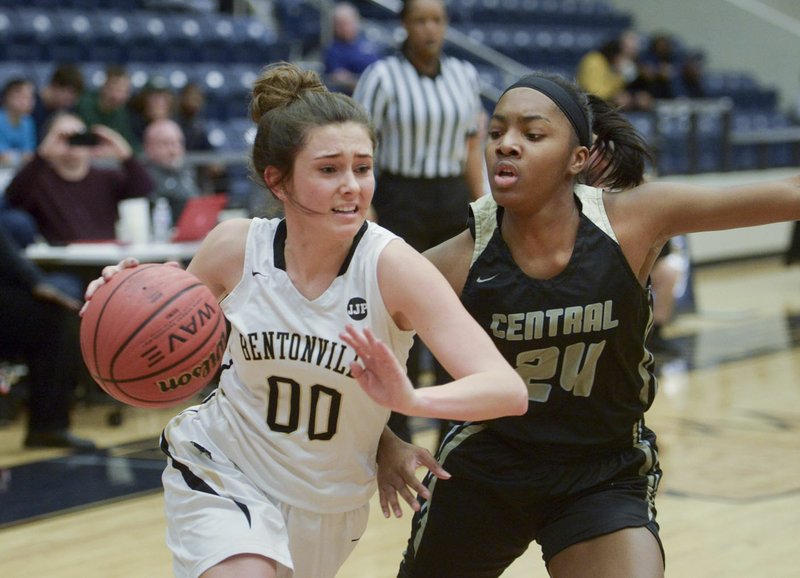 CENTERTON -- One thing Tom Halbmaier has liked about his Bentonville High girls this season is their ability to pile up points in a hurry.

Once the Lady Tigers found their scoring touch Friday night, Little Rock Central couldn't find a way to stop it as Bentonville rolled into the Class 6A State Tournament semifinals with a 65-35 victory in Wolverine Arena.

"The girls this year are extremely streaky, and they're fun to watch," Halbmaier said. "They're playing with so much confidence right now. They're shooting from the perimeter, and they know they have the green light. If they're wide open and have their feet set, they're ready to go."

Bentonville (24-3), the 6A-West Conference champion, needed 77 seconds to get on the scoreboard with an Emily Sanders 3-pointer, but the Lady Tigers quickly picked up the scoring pace. Avery Hughes hit back-to-back buckets to spark a 12-0 run as Bentonville jumped out to a 19-3 lead with under a minute remaining in the first quarter.

Central (12-14) opened the second quarter with a bucket by Lauren Pendleton, only to have Bentonville go on a 13-0 run and extend its lead to 32-7 on another Sanders 3-pointer. The Lady Tigers went on to claim a 45-12 halftime cushion and took their biggest lead when Maryam Dauda's bucket made it 61-25 with 2:23 left in the third quarter.

"Being off for seven days, it might have taken them a little while to get their timing back," Halbmaier said. "It was also the first state tournament for a lot of these kids that are starting, so they might have been a little nervous or apprehensive. Once we hit that first bucket, everything just went away.

"We were trying to focus on ourselves: trying to get our timing back after those days off. The kids did a nice job passing the ball around and moving, and nobody really dominated the ball."

Natalie Smith had 19 points for Bentonville, which plays Conway in a 6 p.m. game today. Dauda finished with 14 while Hughes added 12 and moved into second place on the school's career scoring list with 1,047, surpassing Martha Hancock at 1,039.

Lauren Pendleton was the only Central player in double figures with 18.

Myia Yelder was determined to change that Friday night. The senior guard, who has taken over the leader role after Asiyah Smith went down with a knee injury, scored 23 points in the first half and finished with 27 to lead the Lady Wampus Cats to their semifinal victory over Rogers.

"This is our 30th game, and we typically start the game really slow," Hutchcraft said. "We've struggled with that all year long, and we've had big third quarters. It was completely the opposite.

"I was pleased with how they came out mentally. Our defense helps out of our offense with a lot of steals and a lot of turnovers. It flowed really well on both ends."

Yelder started and finished a 14-0 run during the middle of the first quarter that put Conway in control for good, and she had 11 points as the Lady'Cats jumped out to an 18-5 lead. She quickly added nine more as Conway started the second quarter with another 10 unanswered points and made it a 28-5 game.

After Rogers (18-10) ended Conway's run with two Courtney Storey free throws, Yelder closed out her first-half scoring with a 3-pointer as the Lady'Cats enjoyed a 36-12 halftime cushion.

"Most of the season, scoring-wise, we're pretty balanced," Hutchcraft said. "If you look at our stats, it's been Asiyha and Myia, hand in hand. With Asiyha being out, Myia knows she's had to step up on the offensive end.

"For us, we've had an ACL, a UCL, a meniscus, a broken nose and multiple concussions. It's been one of those years, but for us, the week off wasn't a bad thing. We've mentally had to get over the injury with Asiyha so late in the season, and I think we're now just in a good spot. We're just now in a good spot, chemistry-wise."

Jaiden Thomas was the only other Conway player in double figures with 12. Storey and Amber Covington each had 11 points for Rogers.