REVIEW: 'A Bronx Tale' not everybody's cup of tea, I guess 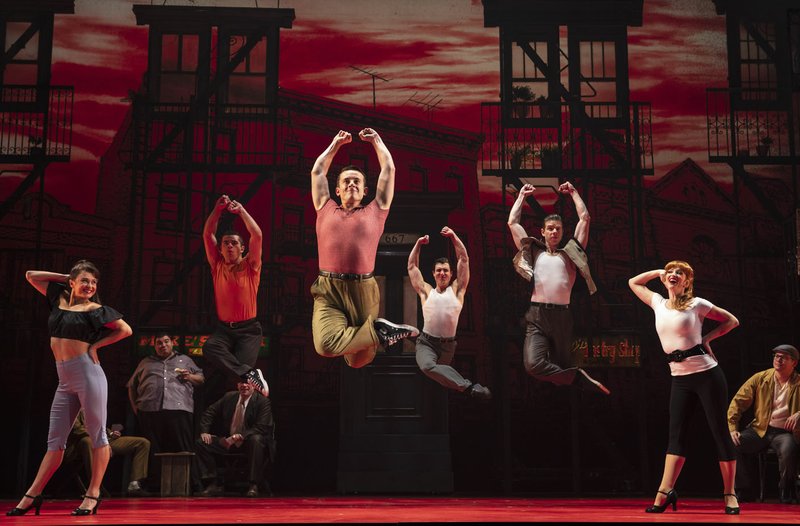 "A Bronx Tale" may not hit the right notes for some, but this reporter enjoyed it. There are four more showings, through Sunday, at the Walton Arts Center in Fayetteville.

The first national tour of the new Broadway musical "A Bronx Tale" opened Tuesday at the Walton Arts Center in Fayetteville to a mostly full house spanning a wide age range. I liked the show. Three of my friends who were there didn't so much. Their reactions made me second-guess my own, but ultimately, I stand by my original feelings when I left the theater -- and I'd even like to see the show again sometime.

"A Bronx Tale" is the true story of actor Chazz Palminteri's life between 1960 and 1968. The history of how the show came to be is almost as interesting as the story itself. And the knowledge that all these events actually happened is what kept one friend engaged throughout, she admitted. The musical hit Broadway in 2016 under the direction of Jerry Zaks -- who directed Palminteri's one-man show telling this story -- and Robert De Niro, who made his directorial debut with the 1993 movie of the same name, in which he starred opposite Palminteri.

As doo-wop music sets the scene, the curtain rises to reveal an impressive red and black backdrop depicting a street corner in The Bronx and the fire escapes and windows of the homes that populate it. The space is filled floor-to-ceiling with details for the eye to take in. A young Calogero, Palminteri's birth name (played by Joey Barreiro) introduces the audience to his neighborhood with the upbeat "Belmont Avenue," and we get the first taste of Alan Menken's score performed by a live orchestra. Minutes into the show, Calogero witnesses a murder outside his building committed by the up-and-coming kingpin of the local Italian gang, Sonny (Joe Barbara). It's immediately clear the rest of the narrative will follow Calogero's infatuation with Sonny's world as the gangster takes the kid under his wing, framed by his hardworking father Lorenzo's (Richard Blake) struggle to keep his son away from that life.

That drama is the heart of the story, but the race relations of the time give "A Bronx Tale" an interesting depth and anchor it in history. Literally, the Italians live on Belmont Avenue, and the African Americans on Webster Avenue just a couple blocks over, and the two DON'T mix -- until Calogero falls for Jane (played by understudy Brandi Porter at Tuesday's performance).

The show is described in much of its press as "'Jersey Boys' meets 'West Side Story.'" And sure, I can see that. But it also didn't feel quite like a conventional musical to me, and I can't put my finger on the reason why. A lot of the music is not especially memorable, but it serves to move the story along. So maybe it feels less like a "musical" and more like a "straight" play with music? But I did enjoy that the score takes us through many of the genres of the time, from swinging pop to rock to gospel-tinged to big band.

And I have to admit, a couple of the supporting performances just missed the mark for me. Frankie Leoni in the role of young Calogero is doing his best. And he is obviously very talented. But the Bronx accent he's obviously been directed to perform is distracting and full-on unfortunate at times.

As I said at the beginning, though, I liked the show. I really enjoyed the performances of the main characters, for the most part. Particularly Blake's relationship with his son and the fatherly protection for Calogero he displayed toward Sonny is heartfelt. I liked Barreiro and his earnest, cute face as Calogero. And I liked Barbara as Sonny, though he's one character the friend next to me said she didn't feel was as believable. Barreiro and Barbara do get the best numbers in the show with "Out of Your Head," Calogero's duet with Jane, and Sonny's big-band offering "One of the Great Ones" that easily feels like it could be a Sinatra or Bublé cover.

It's also worth noting how many in the cast come to the tour from Broadway: Blake originated the role of Lorenzo on the Great White Way and is still the only actor to portray this role; and Barbara as Sonny; Michelle Aravena as mother Rosina; Brianna-Marie Bell (the tour's primary Jane, but performed as Jane's friend Denise before joining the tour); Leoni as young Calogero; and five ensemble members were all part of the show's Broadway run.

Despite a child being part of the cast and a number of kids being in Tuesday's audience, audiences should be aware there is also a fair amount of cursing. (They're New York gangsters in the 1960s. I felt like that wasn't a surprise?) But the mother and her pre-teen looking daughter in front of me did leave at intermission, so just some things to keep in mind when considering if this story is best for your whole family.

I'm still left feeling a little perplexed that my reaction to the show varied so much from some of my companions' in the audience. Maybe I'm easier to entertain? But I wouldn't describe "A Bronx Tale" as an "easy" show. Maybe it's a bit of an acquired taste? There's action -- an off-stage explosion had my seat shaking -- there's humor, there's family, there's coming-of-age poignancy, and there's love. And there's a deep-dive into a microcosm of an American culture I have no experience with. And for all these reasons, I liked it.

Print Headline: REVIEW: 'A Bronx Tale' not everybody's cup of tea, I guess