History In The Cloud 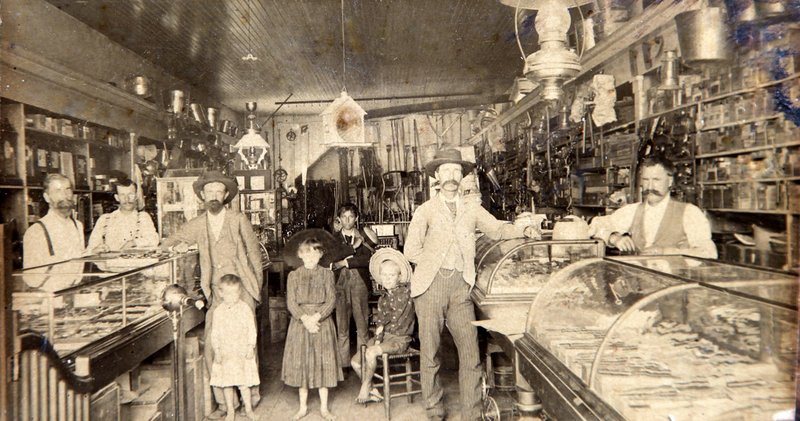 Photo courtesy VintageBentonville.com Among the images collected by the new online Bentonville museum is this one of the interior of a general store downtown. "We don't necessarily need to have items donated to us, but would love to have people let us copy their historic Bentonville/Benton County photos with permission to use them," one of the founders, Randy McCrory, explains. "All physical photographs in the collection are in protective sleeves to preserve them, and all of our images have been digitized and backed up to preserve them in case of disaster. We have had many donations, including five years of the Bentonville Sun newspaper from the 1890s."

Some people might think Bentonville wouldn't have room for another museum, what with Crystal Bridges and the Amazeum both calling the city home.

Randy McCrory would beg to disagree.

WHAT — An online museum

"Various citizens had been trying for over 10 years to found a Bentonville museum without success," he explains. "Among the challenges are the lack of viable space in which to operate and the curation of actual artifacts to make this a reality."

But this time, McCrory's group had something no one else had had before -- "a 20-year personal collection of one of its members."

"In the collection are over 8,000 images with a wealth of material and memorabilia, so we already had the materials for a museum when we started working on this," he says. "We also believe in thinking forward to the future and have taken over 6,600 photos documenting Bentonville as it is now and also the recent changes in the area."

The result is VintageBentonville.com, an online museum.

"We had never seen an online museum and had no idea as to what the response would be," McCrory admits. But two Facebook pages, "Vintage Bentonville" and "Historic Benton County," convinced McCrory and his colleagues the idea would work.

That's just one advantage of an online museum, McCrory says.

"We can put out an almost unlimited amount of information, while a brick-and-mortar museum can display just a fraction of their collection at any time. A regular museum has limited hours and days they are open, whereas we are open 24 hours a day, 365 days a year. You don't have to visit Bentonville to visit our museum. A lot of the people who visit the site used to live in Bentonville but have moved elsewhere in the U.S."

The website for VintageBentonville.com was designed by McCrory's son, Jason, who says the technology to make it work has really just come into existence.

"We started off with four categories but have added two more since we put the museum online," the elder McCrory says. "There are six more categories we are working on to be released later.

"One popular feature is our 'Then and Now' section, which uses an old photo and a recent photo of the same location, with a slide bar that can be moved back and forth to see changes in Bentonville over time," he goes on. "We generally post a new 'Then and Now' each week as well as a new story about local history. I believe what has happened with the site has exceeded our wildest expectations."

McCrory, the nonprofit museum's president and curator and an inventory controller in warehousing for Walmart, is joined in the endeavor by Fred Coffee, treasurer, who is retired and is active in the Benton County Historical Society; John Skaggs, vice president and founder of group, a retired attorney, Bentonville judge, and Bentonville city councilman; and board member Gary Black, who is retired and a former county judge.

"We feel that we are thinking outside the box with this concept," McCrory says. "We also wonder if this might be what museums will look like in the future. I guess you could say that we are a museum without walls."

Print Headline: History In The Cloud