Freedom in Hong Kong in a crunch 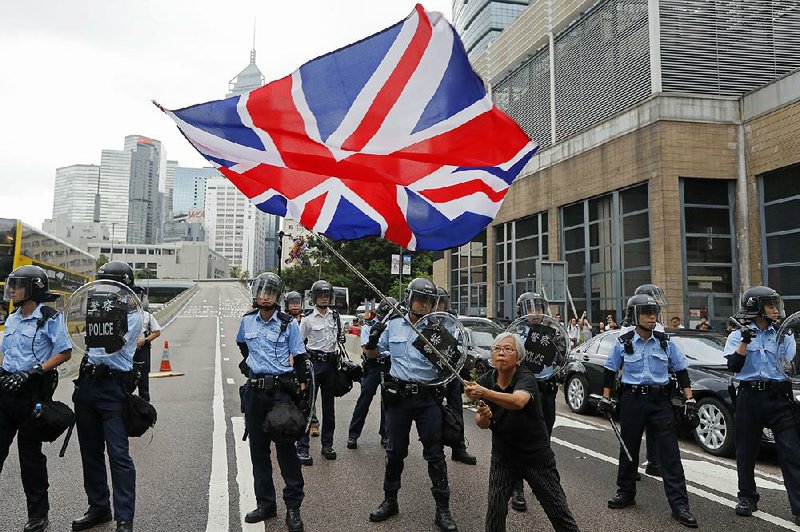 A woman waves a British flag as policemen in anti-riot gear stand guard against protesters on a closed-off road near the Legislative Council in Hong Kong recently.

HONG KONG -- China promised that for 50 years after Britain gave up control of its last colony, the shimmering financial enclave of Hong Kong would get to keep freedoms absent in the communist-ruled mainland. Twenty-two years on, those are rights many believe Hong Kong cannot live without.

The hundreds of thousands who marched in a June 16 protest over a now-shelved extradition bill, and those still demonstrating, are signaling alarm that Hong Kong may become just another Chinese city as those protections unravel and Beijing's influence expands in the territory.

"This is not about a power struggle," said Bonnie Leung, a leader of the Civil Human Rights Front, one of a number of groups involved in organizing recent protests over the legislation. "This is about the values that make the world a better place."

"The whole world, whoever has connections with Hong Kong, would be stakeholders," she said.

All of those involved -- the territory's top official, Chief Executive Carrie Lam, the police, lawmakers, the protesters and the rest of Hong Kong -- are caught up in tensions stemming from the "one country, two systems" colonial legacy that bequeathed a Western-style civic society under a political system controlled by Beijing.

The protests broke out after Beijing-backed Lam tried to push through legislation that would have allowed some criminal suspects to be sent to face trial in Communist Party-dominated courts in mainland China. Many in Hong Kong viewed the bill as another step toward curbing protections they expect from their legal system.

While they come from all walks of life, the protesters share a determination to preserve those freedoms, said Samson Yuen, a professor at Hong Kong's Lingnan University.

"This protest has drawn everybody in town together," he said. "They really value the freedom to speak up and protest."

Jerome Cohen, a leading expert on Chinese law and government, said the extradition bill would have deprived local authorities of the right to prevent forcible transfers by China of suspects, including visitors, "for detention, trial and punishment that violate international standards of justice."

The bill also would have enabled China to require Hong Kong authorities to freeze and confiscate assets of alleged suspects, Cohen wrote in a recent blog post. Efforts to limit the cases subject to extradition would not prevent suspects from being subject to China's "incommunicado torture chambers, its denial of competent legal defenders and its unfair trials."

Most Hong Kong residents belong to families that fled poverty and political upheavals in the communist mainland. British rule did not bequeath them democracy, but it laid the foundations for strong civic institutions, schools, health care -- as well as a laissez-faire trading regime dominated by business leaders deeply invested in keeping Hong Kong as it is.

Normally reluctant to wade into political matters or criticize Beijing, businesses also expressed concern over the extradition bill, with the Hong Kong General Chamber of Commerce noting that the protests reflected "serious apprehensions." The chamber welcomed the government's decision to suspend the bill, as did its American and British counterparts.

It's unclear if the turnout for another big protest planned for Monday, the anniversary of Hong Kong's 1997 handover to Chinese control might match the earlier ones.

Lam's push for the now-stalled legislation, ill-timed around the 30th anniversary of the June 4, 1989, crackdown on pro-democracy protests in Beijing's Tiananmen Square, and the tear gas, steel batons and other aggressive tactics used by police, especially in June 12 protests that turned violent, helped draw people young and old into the streets.

Activists want an investigation into the complaints over police violence, along with Lam's resignation and other demands. But the continued protests reflect a deeper sense of grievance and unease, especially among Hong Kong residents coming of age in an era of declining economic opportunity, said Ken Courtis, chairman of Starfort Investment Holdings.

"Social mobility is more and more theoretical in Hong Kong, so young people continue to be very dissatisfied. There's a broader concern about China in Hong Kong. The economy's not growing like people thought it would grow," Courtis said.

In many respects, Hong Kong faces the same sorts of challenges of other developed economies with aging populations and slowing growth.

The city of 7 million has an economy that is bigger than Vietnam's and a per-capita GDP of more than $46,000. But controls on land use favor property developers, and half the apartments available rent for $2,550 a month or more, while median monthly incomes are about $2,300.

In a city dominated by business leaders and other elites, the only leverage protesters can wield is "the power of numbers," said Yuen, noting that surveys of those participating in protests in recent weeks generally identify with the city's "grass roots or lower classes."

"They see themselves as lower class because of crony capitalism in Hong Kong. It's very hard for them to get a fine paying job and also to buy an apartment in Hong Kong," he said.

Brian Chow, one of the protesters sitting in the sweltering heat on a recent day outside the city's Legislative Council building, said he wasn't the "type" to get involved in violence.

"I'll just carry on sitting here, sing some Christian hymns, show our resistance, keep the government paralyzed until it responds to us," he said.

After protesters blocked lines in the tax and immigration offices downtown last week, the government issued a statement appealing to them to "act peacefully and rationally when expressing their opinions and not to affect those in need of government services."

In her apologies over the extradition bill fiasco, Lam appealed for "another chance" and said she would focus on improving the economy and resolving the housing crisis.

Chinese officials warned against "outside interference" but made a point of backing Lam's decision to sideline the proposal. At a time of severe trade friction with the U.S., Beijing's higher priority lies in preserving Hong Kong's status as a financial hub and free port, Courtis said.

"People in Beijing are pragmatic. They see time in terms of many years," he said. "Step sideways here, if that's not enough then step backwards. Now you focus on making the economy work and keeping people happy."

Print Headline: Freedom in Hong Kong in a crunch