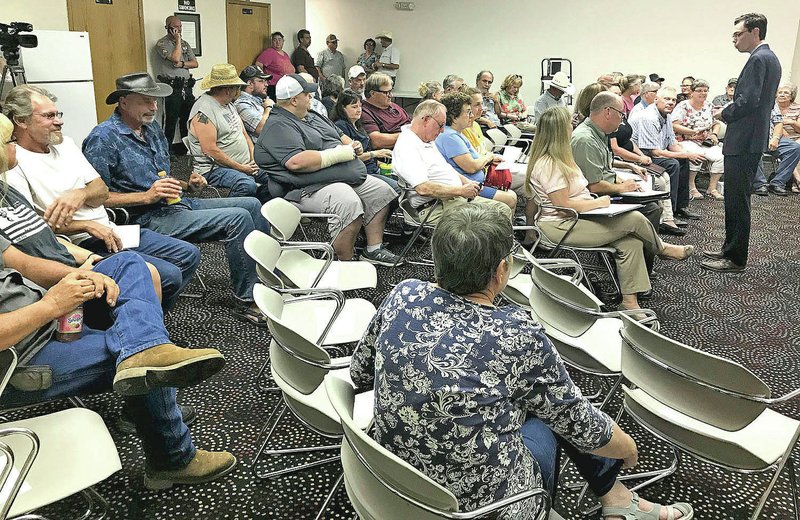 ANDERSON, Mo. -- At least 50 nearby residents demanded tighter environmental scrutiny of a liquid waste-spreading operation nearby operated by a Northwest Arkansas-based business.

They will get it, Missouri Department of Natural Resources officials promised at a meeting Tuesday night.

"This is a big deal," said Cindy Davies, director of the department's southwest regional office in Springfield.

Residents attending the meeting insisted the operation applies excessive amounts of waste and has devastated local streams, polluted the air and generated thousands of trips by heavy trucks.

Bub's Inc. of Tontitown and related business Oil Harvest LLC have contracts to take "biosolids," or organic wastes, from companies including a meat packing plant in Kansas and a sauce and seasoning company in Rogers, according to information provided by the department.

The business is authorized to collect and dispose of waste, including grease-trap waste and water used to wash milk barns, egg processing plants, Dumpsters and trucks, according to Arkansas Department of Environmental Quality permits.

The group in the McDonald County town of about 2,000 people held the meeting Tuesday in Anderson with department officials, their state representative and county commissioners.

Davies told the group the department will step up monitoring the site and for them to notify the department if and when they see runoff coming from the site when there is no rain. That would be the best time to catch a violation if there is one, she said.

Prior department inspections of the property produced recommendations but found no violations, she said. Water samples were taken June 17 and June 19, but results areno't in yet, she said.

Bub's sprays the material as liquid on a 544-acre site in Anderson under a Missouri law allowing the use of such material for fertilizer for agricultural operations, according to the Missouri department.

"I don't see it as agriculture when what they apply is killing everything," said Angela Davidson, whose property adjoins Bub's site. Other than neighbors' cattle and Davidson's own small goat herd being allowed to graze there, residents insisted they never saw any farming use of the land except the clearing of trees. The land was mainly pasture before Bub's started operating there in November 2015, neighbors said.

Excessive or harmful runoff into streams would be a violation of Missouri regulations, the department's officials said. If problems are proven and if they persist, that "may result in permitting requirements, orders to cease operations, penalties or other enforcement actions," according to material provided to residents at the meeting.

"The air we breathe stinks," said Maria Poulides, one of the organizers of the meeting whose property also adjoins Bub's site. "Once crystal-clear streams are oily, and that stuff floats on the top of the water."

Of those, 24 show at least one violation. At least nine of those 24 violations from 2005 to 2015 involve either over-application or improper land application of waste, according to Arkansas records.

Another eight of those 24 inspections were all from close monitoring in 2011 of the company's land application site in Madison County. Arkansas inspectors checked the site from March 29 of that year to the following May.

"Reading the Arkansas file brought me to tears," Poulides said. "We understand if they want it on their own land, they have the right. But this isn't being a good neighbor or a good steward of the land."

Waste is being applied responsibly by other companies in McDonald County, said John Bunch, county commissioner. While every such operation draws a few complaints from neighbors at first, he said, Bub's is the only one causing ongoing cries for help.

Heather Peters, who oversees the fertilizer regulation for the department, said the residents raise a question her department will research: Can a company apply these products, claiming an agricultural fertilizer exemption, if no agricultural goods are produced? Her division will start researching that immediately and should have an answer soon, she told the group.

Meeting attendees told state Rep. Dirk Deaton, R-Noel, if the Department of Natural Resources needs more enforcement power they would support efforts to get it through the Missouri Legislature. Deaton gave those residents his contact information.

Bunch encouraged the group to work with the department and keep encouraging lawmakers to act.

"Getting in a room and venting is not going to get you anywhere," he said.

Resident Janie Plummer, whose property also adjoins the site, said she no longer allows her grandchildren to go to the creeks. She presented the Natural Resources officials with bags of waste taken from her property, including some she believes to be human waste. She and other residents said they have called attention to this problem for years.

"We've done our part," Plummer said. "Now we want you to do your part."